Bakken Revolution and End of the Oil Age 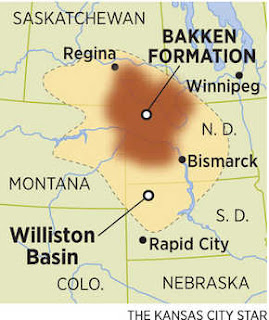 It appears that folks are catching up to the meaning of the announcement last year that it had become possible to do multifracing.  Here we have the first informed consensus and it immediately establishes that oil production will be increasing by 2,000,000 barrels over the next five years.  Add in an additional 2,000,000 barrels from and the experiences an unbelievable 4,000,000 barrel per day swing in oil supplies away from the overseas import market.

Now presume that the electrical car becomes truly market ready (300 mile range) and the same battery technology is retrofitted onto the grid and we eliminate plausibly five million barrels of demand at the same time.

Put it all together, and we have left the Oil Age behind inside this decade.  That is an unbelievable transition that one could only have taken on faith a mere two years ago.   Then it was barely possible, now it is happening.

Bakken-like oilfields in , and other states could raise oil production by 20-40%

http://nextbigfuture.com/2011/02/bakken-like-oilfields-in-texas.html
By 2015, oil executives and analysts say, the new fields in North Dakota, Colorado, Texas and California could yield as much as 2 million barrels of oil a day — more than the entire Gulf of Mexico produces now. New horizontal multifrac drilling is expected to raise production by at least 20 percent over the next five years. And within 10 years, it could help reduce oil imports by more than half, advancing a goal that has long eluded policymakers.

* Bakken oilfield in and Montana producing 458,000 barrels per day
* Eagle Ford oilfield in
* Niobrara, which stretches under , , Nebraska and
* the Leonard, in and
* the , in .


Eagle Ford probably has 4.7 billion barrels of oil or more

Early Bakken pioneer Continental Resources (NYSE: CLR) has described the Niobrara as "huge," noting that it spans over 3 million acres and may contain more than 2 billion barrels of recoverable oil. As for recoveries per well, those estimates are all over the place.

The Venoco CEO stated their might be up to 300 billion barrels of oil in the Monterey Shale but their first well was labeled " uneconomical.". The Shale, while it consists of both oil and gas, is primarily oil. The Shale is a rib-shaped formation that extends from northern California down to the area, offshore, and onto the outlying islands.

There are similar oilfields in Canada, Australia, France, China and other countries

These Bakken like oilfields seem to be all over and I would be surprised if Russia with all of its land does not have some of these kinds of oilfields. The foreign bakken like fields could increase oil production from these kinds of sources to 5-20 million of to 10-20 million barrels per day.
Posted by arclein at 12:01 AM