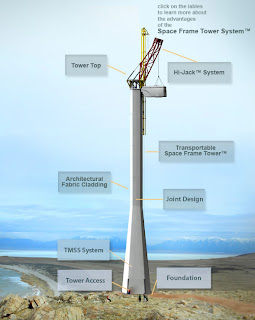 The fix here is that the pylon is assembled surely in panels using space frame ideas.  There is plenty of engineering options with such an approach including letting the outer panels carry a lot of the stress.  In the meantime, its crane stays intact and remains in place to allow repairs as an ongoing option.

I am sure the wind tunnels tests were interesting.  A rectangular cross section for the pylon suggests asymmetric stress loads and plenty of stress variations which are difficult to safely model.  We will have to wait until a few weather gale force winds.

Otherwise this approach should easily slash the cost of the pylon and its install, all of which makes financing much easier.

GE has the horsepower to finance and manufacture this technology into the dominant system and they certainly will.

General Electric today announced it will buy Systems, a move that could change the look, height and economics of wind turbines.

has created something it calls the (see picture). Unlike the sleek, white pylons that hold up most wind turbines, the Space Frame tapers as it goes toward the top. The structure, ideally, will let wind farms put turbines more than 100 meters off the ground. Taller towers will allow the industry to move to longer blades, which will allow a single turbine to produce more power.

The turbine gets mounted on the pole by that crane at the top, called the Hi-Jack System.
The structure, though, is really about economics. The Space Frame can be disassembled into smaller components that are far easier to transport than the dino-sized sections of steel pipe used on traditional wind turbines. Mobilization and de-mobilization can gobble up to ten percent of the cost of a turbine. Instead of 36 trucks being needed to transport all the necessary parts to a site, it only takes six. The Hi-Jack also lets wind farm owners repair a turbine right away, instead of waiting around for a crane to become available.

Commercial availability is slated for 2012.

A few other companies are looking at ways of cutting the cost out of wind by changing the pylon. In , SeaEnergy Renewables has figured out a a way to mount turbines on top of the platforms used for oil derricks. (The company was started by execs who spent decades building the structures that drill for oil in the .) The platforms cost less because they require less steel and construction time is greatly reduced.

If this movement takes off, wind could go down in price. The only losers will be the investment banks: they will have to change all of those ads that feature traditional wind turbines.

Bad observation on "the only losers". This design, vs vertical turbines, is deadly to birds, sends out incredible subsonics and is much more expensive to erect, repair and maintain. Who wins? Not us.

Really?? Where are your facts or studies?? The infra-noise is a pathetic ruse to make money via lawsuits. As far as killing birds cars and power lines kill far more and the facts bear that out!The cost per Kilowatt is comparable and often less than coal.