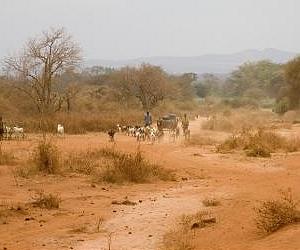 In a way this should have been obvious.  There is simply too much sunlight for many crops in the tropics and this with heavy rains leads directly to soil deteriation.  What nature cannot do well is to establish a planned distribution of trees able to support a healthy nutrient base for cropping annuals.  Yet we can.

Thus we see the onset of small holder agroforestry were the operator uses a lot of trees to provide partial shade, absorb surplus water for respiration, provide fertilizer by lifting deeply located nutrients and shedding leaves and also possibly give a cash crop.  These are early days, so the cash crop part is still sorting itself out, but that today is almost the easiest problem to solve.

The method is not so promising in temperate climes, but again it is all about spacing and shade friendly crops.  If trees are well spaced then the effective shade will be quite low and may even be beneficial to a lot of crops.

I recall how well some grasses performed in shaded areas of the barn.  The quick take home from that is that all permanent pasture land needs carefully spaced shade trees to increase productivity.  Non dwarf apples would be a fine start.

Yet oak and the like will provide fine timber in due time.

The other quick take home is that the woodlot is badly mismanaged and wasted land on most farms.  Cleaning them out – fire is wonderful -   and developing a working seed bed is a good start on a good pasture.

The fact is that we are spoiled by heavy machinery that wants a thousand acre field.  Real productivity needs human inputs and skilled management with working trees.  Somehow a fifty acre field producing a dense crop of natural grasses, densified because of occasional shade that supports at least one hay crop and supports a herd after that while producing hundreds of tons of apples at the end of the season is surely an improvement over a sundried pasture in midsummer.

Today we have the hardware to make all this practical.  This would include wood chippers, chainsaws and a disc plow.

Trees growing on farms will be essential to future development. As the number of trees in forests is declining every year, the number of trees on farms is increasing. Marking the launch of the International Year ofForest by the United Nations Forum on Forests (UNFF9) in New York on 29 January, Dennis Garrity, the Director General of the World Agroforestry Centre, highlighted the importance of mixing trees with agriculture, the practice known as agroforestry.

Growing trees on farms can provide farmers with food, income, fodder and medicines, as well as enriching the soil and conserving water. As natural vegetation and forests are cleared for agriculture and other types of development, the benefits that trees provide are best sustained by integrating them into agriculturally productive landscapes.

Speaking at the High Level Dialogue of UNFF9 on 3 February 2011, Garrity said, "Agroforestry is a crucial bridge betweenforestry and agriculture. Essentially, agroforestry is about the role of working trees in agricultural landscapes, particularly on, but not limited to, small-scale farms."

Over the next two decades, the world's population is expected to grow on average by more than 100 million people a year. More than 95 percent of that increase will occur in the developing countries, where pressure on land and water is already intense.

A key challenge facing the international community is, therefore, to ensure food security for present and future generations, while protecting the natural resource base on which we all depend. Trees on farms will be an important element in meeting those challenges. In some regions, such as Southeast Asia and in , tree cover on agricultural lands now exceeds 30%.

"The transformation of agriculture into agroforestry is well under way across the globe," said Garrity. "And there are drivers, including climate change, that ensure that this transformation will accelerate in the coming years, since agricultural systems incorporating trees increase overall productivity and incomes in the face of more frequent droughts, and agroforestry systems provide much greater carbon offset opportunities than any other climate mitigation practice in agriculture."

In many countries, it is now quite clear that the future of forestry is on farms. In countries such as , , and many others, the majority of the nation's wood is derived from farm-grown timber.

Practiced by farmers for millennia, agroforestry focuses on the wide range of working trees grown on farms and in rural landscapes. Among these are fertilizer trees for land regeneration, soil health and food security; fruit trees for nutrition; fodder trees that improve smallholder livestock production; timber and fuelwood trees for shelter and energy; medicinal trees to combat disease; and trees that produce gums, resins or latex products.

Evergreen Agriculture is a form of agroforestry that integrates trees with annual crops. "We see Evergreen Agriculture as nothing less than the radical, but entirely practical, pathway to a reinvention of agriculture," said Garrity. "It is a vision of a future in which much of our food crops will be grown under a full canopy of trees."

Combining fertilizer trees with conservation farming techniques is doubling and tripling cereal crop yields in many parts of the African continent. The nitrogen-fixing tree Faidherbia or Acacia albida, is increasing unfertilized maize yields in , , , , and in numerous other countries.

They are now being grown on millions of hectares of crop land throughout , at densities of up to 200 trees per hectare, and show a tripling of yield in the crops growing beneath them. Producing food crops like maize, sorghum, and millets under these agroforests dramatically increases their drought resilience in dry years, because of positive soil moisture regimes, and a better microclimate.

This development is not happening only in . The Network of Evergreen Agriculture has been launched to advance an evergreen revolution throughout the subcontinent.

The prunings are fed to the animals. The bushes also reduce the risk of crop failure during droughts and prevent waterlogging when it rains too much. The nitrogen-fixing tree Faidherbia increased unfertilized maize yield four times in . The trees are being grown on over 5 million hectares of crop land in .

Domesticating wild fruit trees in the has allowed smallholder farmers to increase their earnings five times. Thousands of farmers in are planting Allanblackia trees and earning much-needed income by selling the oil-containing seeds to companies to make margarine.

Trees grown on homestead farms, in woodlots and on communal lands are an important source of wood and other products. In humid-zone West African countries, , and in particular, trees grown in home gardens meet most household needs for fuelwood and timber.

In many cash-crop systems, trees are grown for shade and eventually provide wood - an example is Grevillea robusta in tea plantations in . In the , Acacia , the source of gum arabic, is largely grown in agroforestry systems.

Investments in agroforestry over the next 50 years could remove 50 billion tonnes of additional carbon dioxide from the atmosphere. Most of the deforestation in Africa, and in parts of , is caused by agricultural expansion, largely by smallholder farmers.

Agroforestry activities curb emissions of greenhouse gases by slowing the conversion of forest to farm land and holding carbon in the trees on the farms. Developing smallholder agroforestry on land that is not classified as forest could capture 30-40 percent of the emissions related to land-use change. Encouraging farmers to plant trees has the potential to increase farmers' income, sequester more carbon and benefit biodiversity.

"The International Year of Forests is a momentous opportunity to more fully recognize the tremendous importance of agroforestry and evergreen agriculture in building a better world," noted Garrity.

"Agroforestry is one of mankind's best hopes to create a climate smart agriculture, increase food security, alleviate rural poverty, and achieve truly sustainable development. And, thereby, better ensure that our world's forests can indeed be conserved far into the future."

The World Agroforestry Centre, based in is the world's leading research institution on the diverse role trees play in agricultural landscapes and rural livelihoods. As part of its work to bring tree-based solutions to bear on poverty and environmental problems, centre researchers-working in close collaboration with national partners-have developed new technologies, tools and policy recommendations for increased food security and ecosystem health.