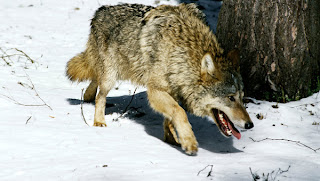 This is another reminder that wolves are and have always been extremely dangerous to the isolated human.  Last year we posted on an Alaskan school teacher caught out while running and killed.  It is just too easy and even a weapon is limited protection against a determined pack.  Fortunately, nothing like that has never quite happened in the modern era, but the possibility certainly exists.

Here we learn the value of serious noise making that the creatures are unfamiliar with.  The take home is to carry loud music making capacity with you at all times.  This should be present practice anyway because we can and will surprise bears in the wild even close to town.  Noise should send them off running.

It will not save you from an ambush by a cougar, but it should handle everything else.  It may actually be practical today to design a wrist alarm device that is raucous and easily triggered.  Certainly back country travelers are taking pepper spray and its like.  I would sooner have an air raid siren.

Do not forget that this kid was toast and he stumbled into a happy ending to tell us about.

A 13-year-old Norwegian boy avoided being attacked by wolves by playing a heavy metal song on his mobile phone, the Zvuki.ru music web portal reported on Thursday.

The incident took place in the central Norwegian . Four wolves, who appeared before the boy when he was returning home from school, were scared away by the noise coming from the boy's mobile phone, the Russian website said.

The song that saved the boy's life was by thrash metal band Megadeth.

The boy said he had been told that in order to avoid being attacked by wolves one should not run away from them but attack them.