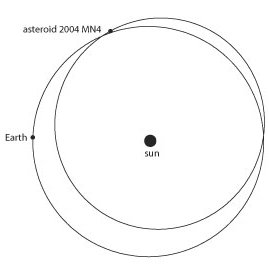 This came out recently, although this asteroid has been known about for several years.  It really comes astonishingly close to the Earth and is a very plausible impactor since it generally shares our own orbit.

This close encounter will perhaps remove from the at risk window although my own intuition is that it will likely converge on a tighter and tighter orbit over many such orbits.

The Russians have decided to go out on a limb and declare that this asteroid could well be as dangerous as it looks on its second pass in 2036.

How anyone could predict that it will likely break up, without knowing its constitution escapes me.

It is as dangerous as it looks if we have converging orbits and we do not have enough information to know if this may be true.  As reported their models become rather fussy far too quickly.

I also do not think that the Russian models are any better than we have.

According to "Ria Novosti" in a Jan. 26, 2011 story, Russian astronomers have predicted that an asteroid may impact Earth on Friday, April 13, 2036.

But first, the asteroid named "Apophis" will transit within 37,000 to 38,000 kilometers (about 23,000 miles) on April 13, 2029. During that time there is a very small possibility that Apophis could possibly pass through a gravitational keyhole that would generate specific effects which could result in an actual collision with Earth's surface in 2036. At present, the National Aeronautics and Space Admin. evaluates this possibility at 1 in 250,000 (4 in a million) and that is a probability of zero on the Torino Scale.

The operative term for this report is "may." The astronomer, Professor Leonid Sokolov of the , made very clear that, according to the news story: ". . .the chance of a collision in 2036 was extremely slim saying that the asteroid would likely disintegrate into smaller parts and smaller collisions with Earth could occur in the following years."

There are some astronomers and observers who consider it possible that the 2029 transit by Apophis could be as close as 18,300 miles and that this would alter the subsequent orbit enough to vastly increase the possibility of an impact trajectory with Earth in 2036. As a result, the Russians and the European Space Agency may look into the need for and the possibility of manufacturing some space device to divert this asteroid.

The overall accuracy of identifying these near Earth objects and predicting their orbits contains large margins of error. On Jan. 13, 2011, "RIA Novosti" reported an object passed within 130,000 km (80,796 miles) of Earth. Named "2010 AL30 . . . 'The asteroid posed no danger anyway,' said astronomer Leonid Yelenin from the Moscow-based Keldysh Institute of Applied Mathematics. He classified asteroids of over 100 meters in diameter as being dangerous." The article goes on, "Yelenin also said the calculations were not quite exact: the asteroid that was expected to come closest to Earth at about 12:48 GMT did so at 06:45 GMT."

For Apophis, there are two functions that may affect its position and potential danger, and both processes can be applied to all near Earth objects. The first is "orbital resonance"; the second is the "Yarkovsky effect."

Orbital resonance is the result of two bodies in space that exert gravitational forces on each other in a certain ratio. This can generate an unstable orbit where they shift positions to eliminate the resonance. The Wikipedia explanation is useful in this context. Whether this may apply to Apophis has not been determined and it has been identified as worth studying by NASA.

The Yarkovsky effect is caused by differences in temperatures on the sunny side and the dark side of objects in space. The Jet Propulsion Laboratories explanation is an easy-to-read article that demonstrates how this could change the orbit of Apophis.

Because of these various effects, Apophis will be the subject of close observation in 2013 as NASA, the European Space Agency and Russian astronomers keep track of it and other potentially dangerous near Earth objects.

Russian astronomers have predicted that asteroid Apophis may strike Earth on April 13, 2036.

The scientist said, however, the chance of a collision in 2036 was extremely slim saying that the asteroid would likely disintegrate into smaller parts and smaller collisions with Earth could occur in the following years.

"Our task is to consider various alternatives and develop scenarios and plans of action depending on the results of further observations of Apophis," Sokolov said.

The asteroid, discovered in 2004, is considered the largest threat to our planet, although NASA scientists reduced the likelihood of a hazardous strike with Earth in 2036.

's space agency announced its plans earlier to consider a project to prevent the large asteroid from colliding with Earth.
, January 26 (RIA Novosti)

May 13, 2005: Friday the 13th is supposed to be an unlucky day, the sort of day you trip on your shoe laces or lose your wallet or get bad news.

But maybe it's not so bad. Consider this: On April 13th--Friday the 13th--2029, millions of people are going to go outside, look up and marvel at their good luck. A point of light will be gliding across the sky, faster than many satellites, brighter than most stars.

For a while astronomers thought it might. On Christmas Eve 2004, Paul Chodas, Steve Chesley and Don Yeomans at NASA's Near Earth Object Program office calculated a 1-in-60 chance that 2004 MN4 would collide with Earth. Impact date: April 13, 2029.

The asteroid is about 320 meters wide. "That's big enough to punch through Earth's atmosphere," devastating a region the size of, say, Texas, if it hit land, or causing widespread tsunamis if it hit ocean, says Chodas. So much for holiday cheer.

Asteroid 2004 MN4 had been discovered in June 2004, lost, then discovered again six months later. With such sparse tracking data it was difficult to say, precisely, where the asteroid would go. A collision with Earth was theoretically possible. "We weren't too worried," Chodas says, "but the odds were disturbing."

This is typical, by the way, of newly-discovered asteroids. Step 1: An asteroid is discovered. Step 2: Uncertain orbits are calculated from spotty tracking data. Step 3: Possible Earth impacts are noted. Step 4: Astronomers watch the asteroid for a while, then realize that it's going to miss our planet.

Killer Asteroid! headlines generally appear between steps 3 and 4, but that's another story.

Astronomers knew 2004 MN4 would miss Earth when they found pictures of the asteroid taken, unwittingly, in March 2004, three months before its official discovery. The extra data ruled out a collision in 2029.

Instead, what we're going to have is an eye-popping close encounter:

Above: The trajectory (blue) of asteroid 2004 MN4 past Earth on April 13, 2029. Uncertainty in the asteroid's close-approach distance is represented by the short white bar. [More]

The asteroid's trajectory will bend approximately 28 degrees during the encounter, "a result of Earth's gravitational pull," explains Giorgini. What happens next is uncertain. Some newspapers have stated that the asteroid might swing around and hit Earth after all in 2035 or so, but Giorgini discounts that: "Our ability to 'see' where 2004 MN4 will go (by extrapolating its orbit) is so blurred out by the 2029 Earth encounter, it can't even be said for certain what side of the sun 2004 MN4 will be on in 2035. Talk of Earth encounters in 2035 is premature."

In January 2004, a team of astronomers led by Lance Benner of JPL pinged 2004 MN4 using the giant radar in . (Coincidentally, the dish is about the same size as the asteroid.) Echoes revealed the asteroid's precise distance and velocity, "allowing us to calculate the details of the 2029 flyby," says Giorgini, who was a member of the team along with Benner, Mike Nolan (NAIC) and Steve Ostro (JPL).

The closest encounter of all, Friday the 13th, 2029, will be a spectacular opportunity to explore this asteroid via radar. During this encounter, says Giorgini, "radar could detect the distortion of 2004 MN4's shape and spin as it passes through Earth's gravity field. How the asteroid changes (or not) would provide information about its internal structure and material composition." Beautifully-detailed surface maps are possible, too.

The view through an optical telescope won't be so impressive. The asteroid's maximum angular diameter is only 2 to 4 arcseconds, which means it will be a starlike point of light in all but the very largest telescopes.

But to the naked eye--wow! No one in recorded history has ever seen an asteroid in space so bright.

Friday the 13th might not be so bad after all.