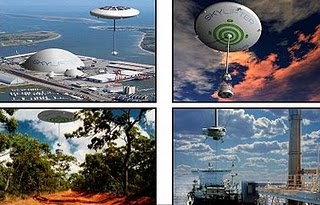 Certainly, this design concept does two things.  First, it grossly eases the structural issues that arise for a cigar shaped craft able to sustain speeds of over 70 knots which was my expectation.  The craft is naturally strong and also naturally stable at a speed of around 40 knots.  Transitioning to the higher speeds drag issues begin to dominate.
Second, the inherent symmetry makes it far more weather worthy and allows it to fly in much rougher conditions that would bend and twist a tube shaped structure dangerously.  One would still be insane to fly into a thunderstorm but it may be much easier to handle just about anything else.
At 70 knots it becomes possible to seriously challenge long haul trucking and rail transport.  Yet a slower craft that is rigged for heavy loads and a more stately speed of 45 knots can likely match the needs of long haul trucking also.
The key is been able to do point to point travel with a hundred ton load.  That is a heavy container or rail car.
Air eliminates operator down time at the expense of two operators but avoids secondary roads and the like.  A factory in can be a straight line trip to a distribution center in downtown .  Of course the long distance here would need two operators or at least one eight hour rest.
The driving distance is around 2900 miles while straight line is around 2600 miles.  The actual time difference if we assume a land speed of 60 mph works out to be that same eight hours assuming perfect conditions.
Perfect conditions in the air are believable while it is not on the road.
Another aspect of this design not mentioned is that it may actually be suitable for the use of hydrogen if the gondola is set to breakaway in an emergency.  A glider parachute configuration seems plausible with this design and not likely to create too much overhead.  That way nothing is internal to the gas bag structure.
Skylifter
Jeremy Fitton of Skylifter is interviewed by Sander Olson
NOVEMBER 10, 2010
http://nextbigfuture.com/2010/11/jeremy-fitton-of-skylifter-is.html
Sander Olson interviews Jeremy Fitton, the founder and Director of Skylifter, an Australian company that is developing a novel transportation system that uses solar powered engines to fly massive balloons. Skylifter should be able to lift 150 ton payloads and transport such payloads over thousands of miles. Although originally developed for the mining industry, skylifter could be also used for tourism, freight transportation, mobile hospitals, or disaster response. Skylifter has already had successful prototype tests and plans on having a full-sized prototype ready within 4 years.

Question: What are the origins of the SkyLifter concept?

Answer: I discovered the mining industry had issues with transporting large, oversize and heavy mining equipment directly to and from the mining sites. Helicopters were about the only option, but they were expensive, short range, and limited to at most 20 tonne payloads. I began exploring the concept of using large balloons to transport heavy payloads. It soon became apparent that by using these large balloons we could transport objects weighing up to 150 tonne thousands of miles, and put them down in precise locations.


Question: So the basic idea is a huge dirigible gas balloon with engines and solar cells attached?

Answer: Yes. The concept is based on proven technologies. Maneuvering the SkyLifter is relatively simple and straightforward and quite easy to understand once it is explained.


Question: How long can the SkyLifter loiter?

Answer: The SkyLifter is inherently buoyant, so if the engines are switched off the craft will simply carry on floating. So the SkyLifter can loiter almost indefinitely, which is very useful if you arrive at a site where they are not ready for your payload. The SkyLifter actually never lands - it just gets moored.

Question: How many prototypes have you created?

Answer: We have already created a mini craft called "Betty" which we built to test the basic concept. Then we built a larger test model called "Vikki" which we use to test aerostat profile and ground handling systems. Next we plan to proceed to a larger "Nikki" prototype before building a full-sized prototype, heavy lifter.

Question: Will SkyLifter use helium in the aerostat?

Answer: Any lighter-than-air gas will work. So far, we have been using helium, but any of a number of gases besides hydrogen, helium, hot air could be used. We plan to offer customers the choice, depending upon their needs.

Answer: Diesel engines generators produce electricity to power the electric motors which run are cycloidal propellers. More electricity can be generated from solar panels located on top of the aerostat – there is 15,000 square metres of space up there. The aircraft is always floating and the propellers are only used for thrust to move the aircraft vertically up and down and horizontally side to side.

Question: What is the approximate range of the SkyLifter? Can it safely traverse oceans?

Answer: We measure range in time rather than distance. With a 150 ton payload, SkyLifter should be capable of 24 hour flights. But if payload were reduced, fuel supplies could increase, leading to much longer flights. Although the SkyLifter can safely traverse any ocean, we are planning on first putting the SkyLifter to use initially on land routes. There are no plans to compete with cruise ships or sea freight.

Question: So Wal Mart could use a SkyLifter to transport freight directly from to a store in the , that would be an amazing idea?

Answer: Yes, it could. However, supply chains such as Wal Mart uses are already well-established and highly efficient so we don’t see this happening for a good many years – let’s get the first one done and go from there.

Question: What is the maximum that a SkyLifter could lift? Will future versions ever be able to carry 1,000 ton payloads?

Answer: Although there are no technical reasons precluding a mega-SkyLifter from being built, it is wiser to start within the realms of what has already been done and scale up from there. A 300 metre diameter aerostat would carry over 1000 tonnes. We’ll look at that after we get the SL150 operating

Question: What is the estimated cost per ton per kilometer with SkyLifter?

Answer: That’s a tough one to answer because there are so many variables but we believe SkyLifter will be comparable to a large interstate road truck in terms of its energy consumption. However, we don't see SkyLifter as replacing ship, train, or road based freight transportation. Rather, we see it serving roles where a traditional transportation infrastructure doesn't exist. In such areas the SkyLifter should be the only solution.

Answer: Yes, there is a demand for mobile real estate and it is completely within the realms of construction to build multi-level portable structures. It’s just not done today because there is no helicopter to pick it up.. These accommodation modules we envision would weigh under 150 tons, and each module would have its own food, water, power, and waste systems built in. So there would be minimal environmental footprint, and these modules could fly over locations that are currently difficult to get to. An individual module could house perhaps 120 people in comfort for 10 days. The limit is the weight rather than the volume.

Question: And modified containers could also be used as emergency evacuation systems?

Answer: Yes, this technology would be ideally suited to emergency situations, since they could reach remote locations and require neither roads nor airstrips to land. In terms of evacuating ‘walking wounded’ people, if each weighs around 100kg, then 150 tonne payload equates to 1500 people. We haven’t looked at the logistics of doing that but I’m sure someone will think about it once SkyLifters are available. At this stage we see SkyLifter being used to deliver full-service mobile facilities to help with humanitarian relief efforts.

Question: It would seem that the military could use SkyLifters to transport supplies to remote areas of .

Answer: Yes, that’s another application for heavy lift logistics. Studies have been done in the past that show aerostats are surprisingly difficult to shoot down. Put some holes in the aerostat and it takes a long time for the gas to leak out. It certainly doesn’t go ‘pop’ like some people might imagine – it is not like a party balloon.

Question: What is the maximum speed and ceiling for the SkyLifter?

Answer: There is no cabin pressurization, so we wouldn't go much above 10,000 feet. We could take it to much higher but that would substantially reduce payload capability. Regarding speed, we don’t need the aircraft to travel fast. Payload and precision flying is our main selling point. But for your information we are planning a design target of 45 knots cruise speed (83km/h ground speed with no wind),

Question: How rapidly could the SkyLifter system be developed?

Answer: With sufficient funding, we should have a prototype flying in 3 to 4 years. From that point on, it would simply be a matter of taking orders and scaling up production. So we could see many of SkyLifters operating a decade from now.
Posted by arclein at 12:29 AM