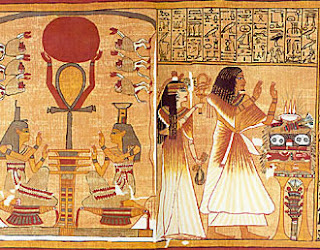 When one reads of the teachings inferred through the book of the Dead, one needs to recall that fifty miles away a new religious teaching arose that outright rejected this whole.  Jesus taught in his time the idea of divine forgiveness and the idea of a priestly taught passport was scotched.
This at least gives us a taste of just how radical these religious ideas were at one time.  It was a world in which priesthoods marketed their own divine dispensation however odd and became central to local economies.
With the book of the dead we see this codified intro a dogma and a set of spells to assist the client in the afterlife.  This was all suppressed under Roman Christian control.  All the supporting literature was suppressed and mostly destroyed.
Ancient Egyptians' spells were 'passport' into paradise
By Laura Allsop for CNN
November 4, 2010 -- Updated 1109 GMT (1909 HKT)
http://edition.cnn.com/2010/WORLD/europe/11/04/egyptians.book.dead/index.html
London, England (CNN) -- If you've ever wished that there was a guidebook to get you into heaven, no matter what your exploits in this life, you're not alone.
In fact, so strong was the desire for eternal life for the ancient Egyptians that they took things a step further, in the shape of a collection of spells, known as the Book of the Dead, designed to fast-track them through the underworld into paradise.
For the ancients, the journey through the underworld after death was filled with obstacles and tests, including knife-wielding gods, monsters and perilous gateways -- and that's where the spells came in.
"It's a kind of repertoire, a pool of about 200 hymns to the gods, magical spells. You could choose from these a number of texts to put onto a roll of papyrus to take with you into your tomb and that would be your passport, your guide, to the next world." John Taylor, curator of a new London exhibition, "Journey Through the Afterlife: Egyptian Book of the Dead," told CNN.
Spells, mummies and amulets
Gallery: 'Passport' to paradise
The gods that had to be overcome are depicted on a number of fragile papyri on display in the , where the exhibition is being held. They include one with the head of a hippopotamus and the body of a lion, wielding a giant knife.
"If you couldn't speak the correct words to this god then it would leap at you with the knife and you would be killed and you would not have the afterlife," explained. "So, knowing these spells was absolutely crucial."
Ancient Egyptians also believed they would have to endure a ritual known as "the weighing of the heart" before a monster in the underworld known as the Devourer. If their hearts were pure, they could pass into the next life; if not, the heart would be eaten.
Mark Smith, a professor of Egyptology at Oxford University, explained that treatment of the body was also a crucial part of the funerary process.
Bodies were cleansed, internal organs removed and preserved in what are known as "canopic" jars, apart from the heart, which was put back in the body. The body was then packed with a salt-like substance called Natron to stop it from decomposing, before being wrapped in bandages and placed in an ornate sarcophagus.
If this complex and gruesome process suggests that the Egyptians were death-obsessed, explained that quite the opposite was true. "What they really want is to live forever," he said.
The lengthy burial process aimed to restore the dead person to life again and give them a new body that they could dwell in, he said.
Also on display are funerary masks, sarcophagi, mummies and amulets unearthed from ancient tombs in what is now that show just how important it was for the ancient Egyptians to get the proper send-off.
But according to , only the top level of Egyptian society could afford it. So what happened if you couldn't buy a book of the dead?
"The poorer people would still have a chance to reach the afterlife," explained. "It's just that the book of the dead would smooth the passage, it would be a kind of fast-track into paradise."
Smith told CNN that hints in a handful of ancient Egyptian texts suggest that there was some provision for the poor in the afterlife. He described one which tells of a virtuous poor man being handed the spells and amulets of a rich but wicked man.
"So, I don't think it is the case that if you couldn't buy a copy of the book of dead, you were out of luck," he said.
Also very important to ancient Egyptians, according to Smith, was the idea of reintegrating into a society in the afterworld.
The book of the dead included spells that would help the deceased make friends on the other side, and gave practical advice about how to approach other spirits.
"There's an ancient Egyptian proverb that says: There is no man except for a man with his brother -- that means, no man is an island," Smith told CNN.
He continued: "I think that proverb gives you a good insight into the way that Egyptians thought. It explains a lot about their ideas concerning the afterlife."
Posted by arclein at 12:13 AM