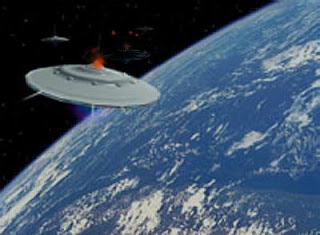 There is a fair body of literature promoting not just the existence of UFO’s, but also a fairly consistent story of a plausibly alien involvement in the development of Earth.  I have taken a minimalist position on all this by simply positing the emergence of a human society during the fifty thousand years preceding what is clearly the Pleistocene nonconformity some 13,000 years ago which ended the ice age by shifting the crust.
My position is that humanity had the time and the natural ability to produce a space faring civilization able to reside in space habitats.  This allowed adaptation to space and complete migration off planet before they brought about the Pleistocene nonconformity.  They then re established humanity in starter colonies on each continent and in time got out of the way while we got on with the job of terraforming the planet in ignorance.
My first conjecture is that all apparent reports of so called alien creatures reported so far could be human derived through genetic engineering.  The two skulls reported, one confirmed as real, fit nicely into this paradigm.  In practice I am able to interpret what I am seeing in the evidence rather consistently,
It is reasonable that once genetic engineering was undertaken, that a range of styles and specialized characteristics would have been entertained and applied.  Recall space habitats could maintain earth gravity in part and this would constrain too flamboyant redesign.
The sighting evidence for UFOs is presently massive and worldwide.  I have to presume that a huge population exists and that visiting Earth is largely routine although the craft lend themselves to stealth.  The craft observed are generally small in size as far as such craft could be.  See my article on reverse engineering the UFO in Viewzone or here.
I suspect that the principle reason for travel in our atmosphere is to transport individuals to long term bases on Earth.  This also makes a great deal of practical sense to retain bases here even if no access to the Earth’s surface can be allowed.  It allows for some gathering of biological materials and other similar needs that may be impossible to easily establish in a space habitat.
Such bases can be accessed from subsea access ports that would never be discovered by ourselves and can be as large as needed.  It is not difficult to produce domed rooms in sedimentary rock such as sandstone and not difficult to secure such rooms against water.  Miles of such structures can be built and populations of thousands can be easily accommodated in this manner.  Such structures could even have been built before the oceans rose to cover entrances.
We know that UFOs are able to submerge in water and thus could easily access such sites.
Potential locations have been noted and many more could easily exist.
Again, once you add in the presence of such stations, we have a clear rational for small UFOs transiting out atmosphere.
I do not wish to promote the idea of ‘aliens’ actually walking among us, but it should be obvious that it would be standard operating procedure used in order to track our actual progress and to collect data as may be needed.  They would avoid disclosure completely.
Posted by arclein at 12:33 AM

Dear Friend,
I have greatly enjoyed looking through your blog. I adore your way of presentation.
I was able to get some of the information from your blog as well as by following external links from your blog.
So I have added your link in My Blogroll section. Please check it. If any changes has to be made please mail me. I would be glad if you could provide a link.
It would be great pleasure if you can add my blog. Here is my blog information:
URL: http://satellitesnews.blogspot.com/
I hope you find this link appropriate and useful. Thanks for your help and consideration.
Sincerely,
Michael Olivia