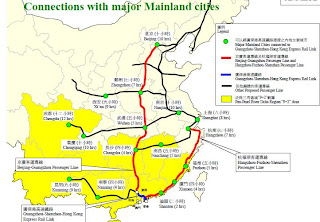 The economic logic for high speed rail is bone simple.  You travel from one mega city transport nexus to another mega city transport nexus in a few hours at most in complete comfort for way less energy, way less gross personal travel time and general inconvenience and less cost in energy.
Of course, has the mega cities as does who will start building the same type of network in about a decade.  may be expected to quickly become hot again.
has a plausible network in the North East and short stretches elsewhere.
It will be a long while before anyone tries to do intercontinental routes I think, though dreamers will want to connect and through to through regions simple rail has yet to succeed.
I would love to see a proper rail connection running down to .
I have no doubt that the economies of scale brought on by now will accelerate development everywhere.
Consider an example of a smaller market.  , and and have two short links that could be traveled in under an hour.  The long link would take four hours.  This would eliminate all need for air travel between these four centers.
The problem is of course the volume to justify the investment in high grade trackage.  Yet the cost is dropping and the short links are already been promoted.
High speed rail from Hong Kong to Beijing by 2012 and other amazing facts about China's high speed rail buildout
OCTOBER 29, 2010
http://nextbigfuture.com/2010/10/high-speed-rail-from-hong-kong-to.html?
click on the picture for a larger view of how Hong Kong will connect to with high speed rail
The Shanghai-Nanjing and Shanghai-Hangzhou high-speed railways began operation this year, and the Beijing-Shanghai high-speed railway is also expected to be operational by the end of 2011.
The high-speed rail from to is expected to begin service by the end of 2012 or in early 2013. By then, the fastest direct train from to will take only 6 hours. Right now, traveling from station to Station takes nearly 19 hours. The Hong Kong-Shanghai high-speed rail journey is approximately 1,300 kilometers in length. So a transfer to the Shanghai-Beijing line would allow transit between Hong Kong and in about 10 hours.
Some amazing facts about 's build out of high speed rail :
* now at 7400+ kilometers of high speed rail has more high speed rail than all of
* doubled its high speed rail with the completion and start of operation of new rail since May, 2010. added nearly 4000 kilometers of high speed rail since May, 2010 which is more than the number 2 country France
.
* will nearly double its high speed rail by the end of 2012 to over 13,000 kilometers. This will put it at more high speed rail than the rest of the world has. Europe, , , etc...
* is pushing to speed up high speed rail speed to 500 kph (312 mph)
* high speed rail between and will have 12 train cars with one leaving every 5 minutes. An estimated 220,000 passengers will use it every day
* By 2020, assuming budgets are met about $300 billion will have been spent to build 25,000 kilometers of high speed rail network that will span most of the country

Hong Kong high speed rail to China may be finished early. Trains will run at speeds of as high as 350 kilometers per hour (217 miles an hour) on the new line, which will form part of a 140-kilometer railway running to Shenzhen and . The line will save the public 40 million hours per year, generating an annual economic rate of return of 9 percent, according to a government paper.

China has started to develop high speed trains with a capability of reaching 500 kilometers per hour. (312.5 miles per hour)

The Beijing to Shanghai high speed line will use 16-car trainset. The power of each trainset will be 20 MW, at capacity of about 1050 passengers, each passenger from and consumes less than 80 kWh in average. The project is expected to cost 220.9 billion yuan (about $32 billion). An estimated 220,000 passengers are expected to use the trains each day, which is double the current capacity. During peak hours there should be a train every five minutes. 1060.6 km, or 80.5% of railway will be laid bridges.
A lot of China's planned high speed build is expected to be completed by 2015.
OCTOBER 29, 2010
High Speed Rail in the USA, South Korea, China and the world
Share
5 http://nextbigfuture.com/2010/10/high-speed-rail-in-usa-south-korea.html
High-speed rail projects in 23 U.S. states will share $2.4 billion in federal aid, Transportation Secretary Ray LaHood said today, adding to $8 billion in stimulus money already awarded for passenger train service. 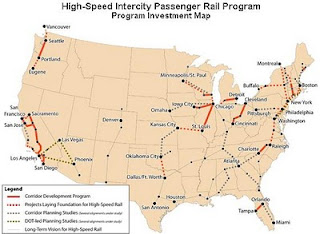 South Korea had an assessment of high speed rail capabilities for countries in the world.
Korea, China, Japan, France, Germany, and are the only countries capable of exporting high-speed rail technology. It takes more than just trains to operate a high-speed rail service. Signal systems, communications networks, construction and operating knowhow are also necessary and must be developed in conjunction. is seeking to export its technology to and the state of .

now stands on par with advanced countries when it comes to the maximum speed. The KTX makes 300 km/h, which is the same as other bullet trains. 's high-speed train is faster, traveling between 330 km/h to 350 km/h, but it trails behind in terms of technology. However, still has some catching up to do when it comes to train manufacture and signaling equipment.
UPDATE : I have a follow up article that discusses the speed and magnitude of China's high speed rail push
High speed rail for California at the federal railway administration.

Phase I calls for an approximately 500-mile system connecting and through the Central Valley to by 2020. Phase II would extend the system north to and south to by 2026. Trains will reach
speeds of 220 miles per hour, providing a travel time between and of under 2 hours 40 minutes, compared to 6 hours by car. When fully developed, expects up to 100 million passengers per year, making it one of the busiest passenger rail lines in the world
Right now, the only nominally high-speed option in the is the Acela line, which runs through the busy Northeast corridor, from to . The trains are capable of traveling 150 miles, or 240 kilometers, per hour. But their average speeds are far lower, because of the need to share the track with other trains and because of the large, busy metropolises along the route.

The major plans for new rail lines in the center on and . Both are contemplating fast trains with dedicated tracks. Peter Gertler, the high-speed rail services chairman of HNTB, an engineering and construction management company based in Kansas City, Missouri, says that Florida is likely to have a high-speed rail line operating first, perhaps by 2015. About 95 percent of the right of way has been acquired between and , Mr. Gertler said
The definition of a minimum speed for high-speed rail is at a lower figure than that used in of 200 km/h (120 mph).
High-Speed Rail – Express: Frequent, express service between major population centers 200–600 miles (320–965 km) apart, with few intermediate stops. Top speeds of at least 150 mph (240 km/h) on completely grade-separated, dedicated rights-of-way (with the possible exception of some shared track in terminal areas). Intended to relieve air and highway capacity constraints.
High-Speed Rail – Regional: Relatively frequent service between major and moderate population centers 100–500 miles (160–800 km) apart, with some intermediate stops. Top speeds of 110–150 mph (177–240 km/h), grade-separated, with some dedicated and some shared track (using positive train control technology). Intended to relieve highway and, to some extent, air capacity constraints.
Emerging High-Speed Rail: Developing corridors of 100–500 miles (160–800 km), with strong potential for future HSR Regional and/or Express service. Top speeds of up to 90–110 mph (145–177 km/h) on primarily shared track (eventually using positive train control technology), with advanced grade crossing protection or separation. Intended to develop the passenger rail market, and provide some relief to other modes
China opened it's 15th High speed rail, the Huhang (Shanghai-Hangzhou) PDL by 26 October, 2010 which will use the CRH380A trainset manufactured by CSR Sifang. Currently has the world’s longest high-speed rail network with about 7,431 km (4,618 mi) of routes capable for 200+ km/h running in service as of October 2010, including 1,995 km (1,240 mi.) of rail lines with top speeds of 350 km/h (220 mph).

China will have a rail network of 110,000 km by 2012, with 13,000 km of it high-speed rail. The highlight of 's high-speed rail network will be the 1,318-km Beijing-Shanghai line. Currently under construction, the 220.9 billion yuan (33.1 billion U.S. dollars) line is scheduled to open in 2012.
launched its first high-speed line - a service linking the capital and the port city of - during the Olympics in 2008. Since then, more fast-train lines have been put into service: the Wuhan-Guangzhou line linking central and south ; the Zhengzhou-Xi'an line connecting central and western ; and the Shanghai-Nanjing line in the country's east
I rode the downtown to airport Maglev one week ago. It got up to a speed of 300 kilometers per hour (180 mph) and made the trip in 8 minutes At some times of the day it will go faster and get to almost a 7 minute trip with a 268 mph top speed.
The extension of the maglev to was finally approved in March 2010, with construction to start in 2010. The new link will be 199.5 km (124 mi) long, 24 km (15 mi) longer than the original plan. The top speed is expected to be 450 km/h (280 mph) but limited to 200 km/h (120 mph) in built-up areas. So there will be two high speed trains going from to (one bullet train and another maglev).
Posted by arclein at 12:19 AM

Hypersonic Zero Emission Transportation is not just possible, it was invented in China.
But the Chinese Governments known for its torture did exactly that.
There is only one Patent on Hypersonic High Speed Rail.
And all other "solutions" are big B.S.
WWW.ZEROEMISSIONTRANSPORTATION.WEBS.COM