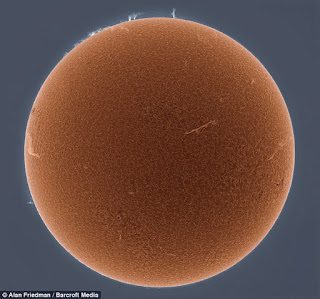 The fine detail displayed here is unmatched and very satisfying.  We actually can see the structures and see them in perspective.  A very nice bit of work for what is certainly a difficult subject.
Enjoy the image and take time to inspect closely.  This shows what is possible to image and the also the degree of improvement over past work.
.
Incredible new image of the sun's atmosphere caught on camera by amateur astronomer
By Daily Mail Reporter
Last updated at 6:42 AM on 2nd November 2010
http://www.dailymail.co.uk/sciencetech/article-1325582/Incredible-new-image-suns-atmosphere-caught-camera-amateur-astronomer.html
Displaying the intense ferocity of the solar atmosphere this phenomenal big picture shows the sun in a rather unusual way
Aptly entitled, 'Not The Great Pumpkin', it was taken by American amateur astrophotographer Alan Friedman on a small 14 inch telescope.
The image brilliantly displays the atmosphere of the sun, called the chromosphere and it was taken using a special 'hydrogen' filter that only captures a tiny part of the visible light spectrum.
Sun spots many times the size of the Earth can be clearly seen within the churning plasma that swirls across the superheated surface of our nearest star.
This phenomenal picture of the solar chromosphere shows the 'atmosphere' of the sun, just above the surface
Vaporised plamsa temporarily defies the crushing gravitational pull of the sun only to cascade back to the surface in brilliant arcs of superheated gas.
The pictures were taken by part-time astrophotographer, Alan Friedman, using his small but powerful home telescope, which he affectionately calls, 'Little '
'This image is seen only with a special filter that isolates a very narrow band of the visible spectrum the hydrogen alpha bandwidth,' said the 56-year-old New Yorker.
'The hydrogen alpha filter sits in front of my small telescope - the webcam goes in the back and is attached to my laptop computer, which runs the camera and downloads the data stream.
Alan's day job is designing cards for the 's multimillion pound greetings cards industry.
He spends his nights glued to the telescope and exhibits his most dramatic space photography.
'I try to record images of scientific interest through high resolution astrophotography, but maintaining a respect for the aesthetic beauty and intrigue of the universe around us,' said Alan.
'I think that paying attention to art and science both has helped me to create images that share both knowledge and inspiration.'
Posted by arclein at 12:20 AM

well post, i was looking the same for my global warming essay help.