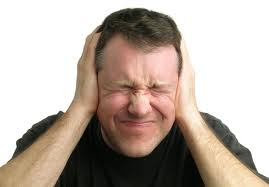 This medical issue has been a challenge in terms of treatment.  The good news that is provided by this work is that we can stop treating the ear itself as that will be clearly useless.
Now we need to discover protocols that go somewhat deeper, and it is possible that some present methods may just help here.  One suspects from this that a simple disturbance however induced will change the parameters for both better and worse.  So it will be tricky.  But we now know were to start.
Overall, this is good news for sufferers and the medical profession can stop blaming the patient for their inability to help.  Some bright researcher may now spot a quick fix and clean this issue up. Worse case we have a real starting point.
Tinnitus caused by neurons firing in brain
Thu Nov 11, 3:03 PM
By The Canadian Press
http://ca.news.yahoo.com/s/capress/101111/national/tinnitus_cause
HAMILTON - Attention tinnitus sufferers — that annoying ringing in your ears is actually all in your head.
A research team from , the of and four universities says it has pinpointed the source of tinnitus.
Surprisingly, it's not the ear.
McMaster professor Larry Roberts and his co-authors report there's evidence the high-pitched ringing or hissing noise tinnitus sufferers hear is generated by neurons firing in the brain, not the ear.
"Tinnitus itself is not actually generated by irritative processes in the ear but it's generated by changes that take place in the brain when neurons in the brain lose some of their input from the ear," Roberts said Thursday in an interview from Ottawa.
The phantom intermittent or sometimes constant ringing or buzzing sound in the ears affects millions of people worldwide.
Barbra Streisand has it. So does William Shatner. Eric Clapton, Phil Collins, Moby, U2's The Edge and Metallica's Lars Ulrich have all said they suffer from it.
Ten to 12 per cent of the population has it but only one to two per cent are so disabled by it that they seek treatment, Roberts estimated.
Roberts, who's had the condition himself for 15 years, said tinnitus is brought on by changes in the brain that take place when someone suffers hearing loss from noise exposure or aging.
Some medications, infections or disease of the middle ear can also cause tinnitus. Fatigue can worsen it.
Not everyone with hearing loss has tinnitus. But some people who get a hearing aid find their tinnitus is lessened, the professor said.
The activity of the neurons is modulated by chemicals in the brain that fluctuate over time.
"Some of the variations in the strength or loudness of tinnitus may be related to these modulatory neurochemicals," he said.
Some people can also alter the loudness and pitch of their tinnitus by clenching their jaw or tensing their neck muscles, the researchers reported.
Tinnitus is most common after age 60, where eight to 20 per cent of adults are affected. But chronic tinnitus can occur at any age and is a major cause of service–related disability in soldiers returning from or , the researchers said.
Honing in on the source of the tinnitus won't lead to a direct treatment. But it does provide a greater understanding of what's happening to tinnitus sufferers, Roberts said.
Studies suggest hearing loss among young people is on the rise. There may be an increase in tinnitus cases as more people suffer mild hearing losses from recreational sound, including cellphones and iPods, said Roberts.
He called for public policy to be developed on prevention of hearing loss. Roberts noted public opinion has been swayed on the dangers of cigarette smoking. He'd like to see something similar to protect hearing.
The research is in an article published in the latest edition of The Journal of Neuroscience.
Roberts will be part of a symposium presenting the research at the Society for Neuroscience meetings in on Sunday.
Posted by arclein at 12:03 AM