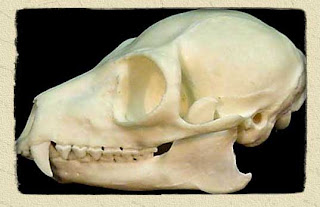 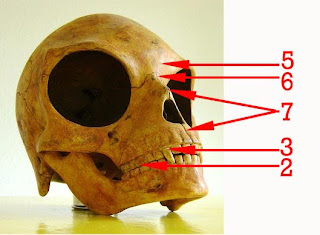 The urantia papers as previously posted are transcriptions from a seer who was not conscious of the content during the 1920’s under professional supervision.  This excerpt describes the early stirrings toward human emergence, and we presume other intelligent life forms on Earth.
What is important is the role of the lemur as the initial stock.  In the 1920’s or any time before or since, the lemur has not figured much at all in speculations on human evolution.  This is not an idea that could have arisen from reading the literature to the best of my knowledge.  You have to ask were such an idea may have come from.
What now becomes interesting is whether the lemur informed a derivative fabrication of the Sea land skull posted on a few weeks ago.  In order to compare, I am posting images of both skull types.
If we presume the same infantalisation path to produce a larger skull and to rotate the snout downward, then it almost works.
Yet I am uncomfortable using the lemur as a model to inform the fabrication of the Sea land skull.  There are better primate skulls to use with large eyes that are not using an open arch.
Thus I do not think it impossible for the Sea land skull to be a sculpture, except for the reported Carbon 14 age of almost a thousand years.
The integrity of the skull also suggests that the skull may be far more robust as is the starchild skull.
We will just have to wait for additional testing both DNA and strength to establish authenticity. 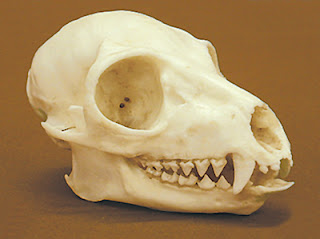 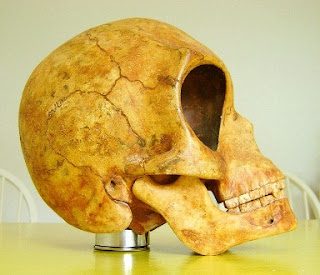 Excerpt from the Urantia papers:
ABOUT one million years ago the immediate ancestors of mankind made their appearance by three successive and sudden mutations stemming from early stock of the lemur type of placental mammal. The dominant factors of these early lemurs were derived from the western or later American group of the evolving life plasm. But before establishing the direct line of human ancestry, this strain was reinforced by contributions
from the central life implantation evolved in . The eastern life group contributed little or nothing to the actual production of the human species.
THE EARLY LEMUR TYPES
1 The early lemurs concerned in the ancestry of the human species were not directly related to the pre-existent tribes of gibbons and apes then living in Eurasia and northern , whose progeny have survived to the present time. Neither were they the offspring of the modern type of lemur, though springing from an ancestor common to both but long since extinct.
2 While these early lemurs evolved in the Western Hemisphere, the establishment of the direct mammalian ancestry of mankind took place in southwestern , in the original area of the central life implantation but on the borders of the eastern regions. Several million years ago the North American type lemurs had migrated westward over the Bering land bridge and had slowly made their way southwestward along the Asiatic coast. These migrating tribes finally reached the salubrious region lying between the then expanded and the elevating mountainous regions of the Indian peninsula. In these lands to the west of they united with other and favorable strains, thus establishing the ancestry of the human race.
3 With the passing of time the seacoast of southwest of the mountains gradually submerged, completely isolating the life of this region. Here was no avenue of approach to, or escape from, this Mesopotamian or Persian peninsula except to the north, and that was repeatedly cut off by the southern invasions of the glaciers. And it was in this then almost paradisiacal area, and from the superior descendants of this lemur type of mammal, that there sprang two great groups, the simian tribes of modern times and the present-day human species.
Posted by arclein at 12:01 AM

Hello,
I visited your blog. The information which you have shared in your site is very informative. I really much impressed with your blog.
I have added your blog to My Blog Roll at
http://autotransport-uk.blogspot.com.
If you give my links on your blog it will be useful to our visitors and also can get ideas and information from your site.

It would be great, if you could spare a few minutes visiting my blog. If you find my blog to be informative, it would be nice if you could provide me a little space in your blogroll.

Thanks for the opportunity.