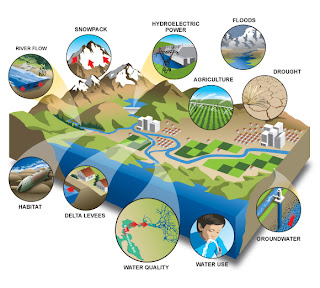 This is of course another item on the great climate warming debate and makes much of the late conversion to a more balanced approach to the subject by this great magazine.  Let it be said that no one whatsoever covered themselves with any glory on this issue in the media.
The whole edifice of global warming looks like the Titanic on the sea bottom making this one of the most startling reversals of sentiment ever. It was sunk by a handful of scholars who refused to bend while fending off severe pressure and this opened the back door for the email leak that torpedoed the scheme.
The really good news is that peer review can and will work however you wish to push an agenda.  In the world of the internet, it is too easy to get the story out and in front of interested parties.  It also opens the door for rubbish but the informed reader does not mind paying that price.
Anyone who has followed my posts here knows that I look for counter explanations because that is the way to both better understanding and often better theory.  Recently I have been reflecting on the problems we have with Roundup and aggressive use of fertilizer in industrial farming.  These are progressing to a crisis that will possibly destroy or at least sharply reduce a large part of our agriculture and that is worth worrying about.
Anyway, it is good to see Scientific American getting back on form.
"Scientific American" rediscovers science
Saturday, October 23, 2010
An email from Vincent Gray [vinmary.gray@paradise.net.nz] below:
http://antigreen.blogspot.com/2010/10/scientific-american-rediscovers-science.html
I have been a subscriber to the "Scientific American" for as long as I can remember. I have been bitterly disappointed at there persistent embrace of the climate change fraud and the publicity they have given to its promoters.

I have still kept subscribing for the occasional genuine scientific articles.

I just received the issue for November 2010 and I almost fell off my chair at two of their articles. They now admit for the first time the sceptics might be right and they invite discussion on their website here

The first article, page 8 entitled "Fudge Factor" tells of a scientist who always found the results which fitted theory when they did not, how this sort of thing happens all too frequently and includes a sentence questioning whether proxy temperatures measured from tree rings are not an example..

The second article, page 58 has a full page photograph of Judith Curry, Climate Heretic who has been consorting with the likes of Chris Landsea, Roger Pielke Sr, Steven McIntyre and Pat Michaels, who has doubts about the entire IPCC process. I had noticed her intelligent letters on the various blogs
There is a diagram showing how ridiculous the Hockey Stick becomes when you put in the uncertainties.
I have only just finished reading this so I have not so far commented, but I thought you should know that when a magazine like the "Scientific American" permits free discussion on climate change it must mean the beginning of the end.
Immediately below is the introduction to the second article that Vin Gray refers to. Note the Fascist attitude highlighted in red. Below that is an excerpt of the first article referred to. Again note the rubric

Climate Heretic: Judith Curry Turns on Her Colleagues
Why can't we have a civil conversation about climate?

In trying to understand the Judith Curry phenomenon, it is tempting to default to one of two comfortable and familiar story lines.

For most of her career, Curry, who heads the School of Earth and Atmospheric Sciences at the Georgia Institute of Technology, has been known for her work on hurricanes, Arctic ice dynamics and other climate-related topics. But over the past year or so she has become better known for something that annoys, even infuriates, many of her scientific colleagues. Curry has been engaging actively with the climate change skeptic community, largely by participating on outsider blogs such as Climate Audit, the Air Vent and the Black board.

Along the way, she has come to question how climatologists react to those who question the science, no matter how well established it is. Although many of the skeptics recycle critiques that have long since been disproved, others, she believes, bring up valid points—and by lumping the good with the bad, climate researchers not only miss out on a chance to improve their science, they come across to the public as haughty. “Yes, there’s a lot of crankology out there,” Curry says. “But not all of it is. If only 1 percent of it or 10 percent of what the skeptics say is right, that is time well spent because we have just been too encumbered by groupthink.”

She reserves her harshest criticism for the Intergovernmental Panel on Climate Change (IPCC). For most climate scientists the major reports issued by the United Nations–sponsored body every five years or so constitute the consensus on climate science. Few scientists would claim the IPCC is perfect, but Curry thinks it needs thoroughgoing reform. She accuses it of “corruption.” “I’m not going to just spout off and endorse the IPCC,” she says, “because I think I don’t have confidence in the process.”

Whispered discreetly at conferences or in meeting rooms, these claims might be accepted as part of the frequently contentious process of a still evolving area of science. Stated publicly on some of the same Web sites that broke the so-called Climategate e-mails last fall, they are considered by many to be a betrayal, earning Curry epithets from her colleagues ranging from “naive” to “bizarre” to “nasty” to worse.

All of which sets up the two competing story lines, which are, on the surface at least, equally plausible. The first paints Curry as a peacemaker—someone who might be able to restore some civility to the debate and edge the public toward meaningful action. By frankly acknowledging mistakes and encouraging her colleagues to treat skeptics with respect, she hopes to bring about a meeting of the minds.

The alternative version paints her as a dupe—someone whose well-meaning efforts have only poured fuel on the fire. By this account, engaging with the skeptics is pointless because they cannot be won over. They have gone beyond the pale, taking their arguments to the public and distributing e-mails hacked from personal computer accounts rather than trying to work things out at conferences and in journal papers.

Which of these stories is more accurate would not matter much if the field of science in question was cosmology, say, or paleontology, or some other area without any actual impact on people’s lives. Climate science obviously is not like that. The experts broadly agree that it will take massive changes in agriculture, energy production, and more to avert a potential disaster.
In this context, figuring out how to shape the public debate is a matter of survival. If people and governments are going to take serious action, it pretty much has to be now, because any delay will make efforts to stave off major climate change much more expensive and difficult to achieve. But the COP15 climate negotiations in last December ended in a watered-down policy document, with no legally binding commitments for countries to reduce greenhouse gas emissions. Following , the Senate was unable to pass even a modest “cap and trade” bill that would have mandated reductions. And in the wake of Climategate a year ago and widespread attacks on the IPCC and on climate science in general, the public may be more confused than ever about what to think. Is Curry making things worse or better?

Fudge Factor: Did Marc Hauser know what he was doing?

As of this writing, the precise nature of Marc Haus er’s transgressions remains murky. Haus er is Harvard’s superstar primate psychologist—and, perhaps ironically, an expert on the evolution of morality—whom the university recently found guilty of eight counts of scientific misconduct. Harvard has kept mum about the details, but a former lab assistant alleged that when Hauser looked at videotapes of rhesus monkeys, in an experiment on their capacity to learn sound patterns, he noted behavior that other people in the lab couldn’t see, in a way that consistently favored his hypothesis. When confronted with these discrepancies, the assistant says, Hauser asserted imperiously that his interpretation was right and the others’ wrong.

Hauser has admitted to committing “significant mistakes.” In observing the reactions of my colleagues to Hauser’s shocking comeuppance, I have been surprised at how many assume reflexively that his misbehavior must have been deliberate. For example, physicist Robert L. Park wrote in a Web column that Hauser “fudged his experiments.” I don’t think we can be so sure. It’s entirely possible that Hauser was swayed by “confirmation bias”—the tendency to look for and perceive evidence consistent with our hypotheses and to deny, dismiss or distort evidence that is not.

The past few decades of research in cognitive, social and clinical psychology suggest that confirmation bias may be far more common than most of us realize. Even the best and the brightest scientists can be swayed by it, especially when they are deeply invested in their own hypotheses and the data are ambiguous. A baseball manager doesn’t argue with the umpire when the call is clear-cut—only when it is close.

Scholars in the behavioral sciences, including psychology and animal behavior, may be especially prone to bias. They often make close calls about data that are open to many interpretations. Last year, for instance, Belgian neurologist Steven Laureys insisted that a comatose man could communicate through a keyboard, even after controlled tests failed to find evidence. Climate researchers trying to surmise past temperature patterns by using proxy data are also engaged in a “particularly challenging exercise because the data are incredibly messy,” says David J. Hand, a statistician at .
Posted by arclein at 12:01 AM