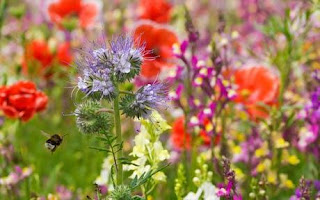 I do not know what if anything should be made of all this.  It seems a more creditable culprit is the general use of roundup. A timely wind blown treatment will knock out vulnerable plants.  Of course, there may be no culprit at all except the lack of burn over taking place.
We are a long way from having all the answers when it comes to good husbandry and it is far too easy to accept blame when it may not be justified at all or proven rigorously by any scientific protocol.
A lesson of interest was the restoration of many wild flower regimes after a planned woodlot burn in the .
To even know that requires experiment and decadal logging of natural occurrences and who really has the time and energy to do all that without a lot of prodding.  Perhaps we can dragoon school kids into the enterprise in which a map cell comprising perhaps an acre of wild wood is searched closely for wild flower occurrence several times during the season.  Such a record can be uploaded and maintained and tracked year after year.
Loss of wildflowers in countryside
Butterflies and bees are declining because of the loss of wild flowers in the countryside, according to a major Government report.
By Louise Gray, Environment Correspondent
Published: 12:48PM BST 27 Oct 2010
http://www.telegraph.co.uk/gardening/8089773/Loss-of-wildflowers-in-countryside.html
A team of researcher from the Centre for Hydrology and Ecology monitored 500 plots of ‘semiwild’ land across the between 1990 and 2007 on the edge of farms, alongside hedgerows or streams and even at the bottom of people’s gardens.
Over 17 years the number of different plants on each plot reduced significantly, with at least one species lost in every patch of ground.
Most of the plants lost were wild flowers like poppies, willow herb and forget-me-nots.
These ‘good weeds’ not only make the countryside look pretty but are essential to sustaining the population of nectar-feeding insects.
Butterflies and bees need variety in their diets and rely on different plants to provide this diversity. Also, wild flowers provide nectar when agricultural plants have been harvested.
Lindsay Maskell, a vegetation scientist at CEH, blamed ‘bad weeds’ like nettles, thistles and ivy for crowding out the wild flowers. Although she pointed out that all plants have a role in the wider eco-system.
She explained that run-off from farms and nitrogen from factories have fertilised the soil, helping coarse rough grass to grow but hindering more delicate plants like speedwell.
She said the decline in wild flowers was affecting insects and could eventually reduce the harvest of crops like strawberries and apples that rely on pollinators.
“The habitat pollinating insects rely on is disappearing and becoming in a worse condition,” she said. “It is just one of a number of factors such as disease affecting insects like bees. If there is insufficient land to maintain the pollinators it could affect agriculture.”
The CEH study was commissioned by the Department for the Environment, Food and Rural Affairs (Defra).
Caroline Spelman, the Environment Secretary, said farmers, councils and even individuals can help to boost the number of pollinating insects by planting the right flowers.
“Pollinating insects are vital to our existence, helping to provide the food on our tables. It is important that we investigate the causes of the decline and take action to address it,” she said.
'Good' weeds
Poppies
Red clover
Sundews
Forget-me-not
Willow herb
Speedwell
Scarlet pimpernel
Cowslips
'Bad' weeds
Nettles
Brambles
Thistles
Ivy
Cock’s-foot grass
Rye grass
Himalayan balsam
Japanese knotweed
Posted by arclein at 12:12 AM