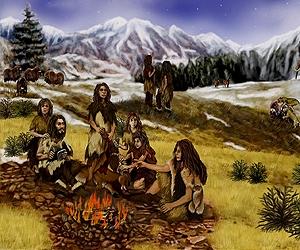 This begs the big question.  What part of the brain develops to cause globularisation?  It is obviously important to the rise of humanity and likely its innate intelligence or perhaps only indirectly.
This does put the consideration of Neanderthal intelligence into a much less flattering light.  It just may not be so, particularly when one considers their inability to easily innovate tools when compared to their contemporaries.
Of much more interest, we suddenly have an insight that suggests that we can plausibly enhance animal intelligence by inducing a specific structural change in the animal brain.  Dolphins leap to mind, as do dogs.  Both have the possibility of an active role in the human economy and that would be hugely enhanced if communication became possible.
And after posting on the uses of pouch rats, we may even do something there.
What is important is that it appears a portion of the brain is programmed to have a preferential growth spurt on birth.  That can be plausibly induced.
Differences In Human And Neanderthal Brains Set In Just After Birth
by Staff Writers
(SPX) Nov 09, 2010
http://www.terradaily.com/reports/Differences_In_Human_And_Neanderthal_Brains_Set_In_Just_After_Birth_999.html
The brains of newborn humans and Neanderthals are about the same size and appear rather similar overall. It's mainly after birth, and specifically in the first year of life, that the differences between our brains and those of our extinct relatives really take shape, according to a report published in Current Biology.
The findings are based on comparisons of virtual imprints of the developing brain and surrounding structures (known as endocasts) derived from the skulls of modern and fossilized humans, including that of a newborn Neanderthal.
Philipp Gunz of the Max Planck Institute for Evolutionary Anthropology explained that the differences researchers observe in early brain development likely reflect changes in the underlying brain circuitry. It is that internal organization of the brain that matters most for cognitive ability.
"In modern humans, the connections between diverse brain regions that are established in the first years of life are important for higher-order social, emotional, and communication functions," Gunz said. "It is therefore unlikely that Neanderthals saw the world as we do."
Whether cognitive differences exist between modern humans and Neanderthals is the subject of contentious disputes in anthropology and archaeology, he said.
Because the range of brain sizes in Neanderthals overlaps with humans, many researchers had assumed that the cognitive capabilities of the two species were similar. The new findings challenge that notion.
In fact, the elongated overall shape of the braincase hasn't changed much in the course of more than two million years of human evolution, despite a big increase in endocranium volume. It is the globular braincases of modern humans that distinguish our own species from our closest fossil relatives and ancestors.
The new results show that, at the time of birth, both Neanderthals and modern humans have elongated braincases, but only modern human endocasts change to a more globular shape in the first year of life.
"The distinct globular braincase shape of adult humans is therefore largely the result of an early brain development phase that is absent from Neanderthals," Gunz said.
The research team had earlier found that the developmental patterns of chimpanzee and human brains are remarkably similar after the first year of life but differ markedly immediately after birth. The new findings therefore show that the "globularization phase" of brain development distinguishes modern humans not only from chimpanzees, but also from Neanderthals.
This new view on human brain development might shed light on the results of a recent comparison of Neanderthal and modern human genomes, according to the researchers.
"The uniquely modern pattern of early brain development is particularly interesting in the light of the recent breakthroughs in the Neanderthal genome project, which identified genes relevant to cognition that are derived in living humans," the researchers wrote.
"We speculate that a shift away from the ancestral pattern of brain development occurring in early Homo sapiens underlies brain reorganization and that the associated cognitive differences made this growth pattern a target for positive selection in modern humans."
Posted by arclein at 12:19 AM

While this was an interesting article on Neanderthal brain development, I could not help but notice several weak spots in the argument presented in the theory.

First, I noted scientists only examined "a" newborn Neanderthal fossil brain casting, and one is a very small data base and hardly sufficient for broad speculation.

Secondly, the "globularization" term is not defined with specific traits in brain physiology that we laymen can comprehend. In fact, the study's specifics were lacking entirely.

I don't doubt the statement that Neanderthals likely saw the world differently than we modern humans, and thought differently. But, hey,
their primitive world was very much different than our own and presented different challenges to them as they sought to meet their daily needs for life, liberty, and happiness, survival and health.

Overlooked were the questions of Nature vs. Nurture, and exactly how developing the brain of any species' neural net will enhance the qualities of cognition such as abstract thinking and creativity.