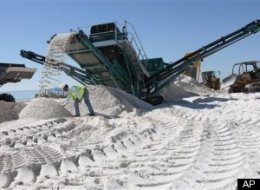 Looks like they are making pretty good progress on the cleanup. Nicely done!