EXCLUSIVE: How a Philly mob boss stole the election — and why he may flip on Joe Biden 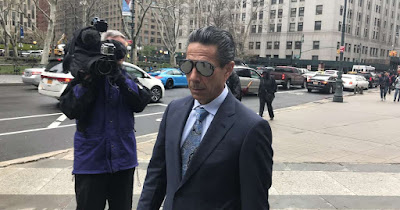 Of course.  He knows it is all a sting and game over for the DEMs forever.  It is time to cut and make the best possible deal and be public about it all as well.  Secrecy is not possible when you walk into a FED trap.

He obviously see this also as an opportuniuty to get a general perdon.  a tall order but the specticle of the DEMs and the Mafia caught in bed together is just too good to not relish it.

what ever his fate, it is becoming clear that fraud of this magnitude outed before a vote confirmation is a disaster for the DEMs.

EXCLUSIVE: How a Philly mob boss stole the election — and why he may flip on Joe Biden

The innermost circles of the American mafia are abuzz.  The Boss of the Philly mob — ‘Skinny Joey’ Merlino — is taking a victory strut, hobnobbing around the highest echelons of old-time mafia folk, mostly in Florida, describing what may have been the heist of the century: the 2020 presidential election.

The feat is drawing praise from far-flung corners of the Italian American business community, which sees the thanks of a grateful administration as key to the revival of the community’s political influence.

But an associate says that Merlino might just be willing to flip on Joe Biden and the Pennsylvania political operatives who ordered up some 300,000 election ballots marked for Biden.  The source alleges that Merlino and a lean team of associates manufactured those ballots at a rate of $10 per ballot — a whopping $3 million for three days of work.  They were then packaged into non-descript cardboard boxes and dropped off outside the Philadelphia Convention Center.

Sources who spoke to The Chronicle on the condition of anonymity say that Merlino picked up those ballots from two private households where a trusted handful of associates were busily marking ballots with Sharpie markers.  They were paid more than $1,000 per hour, often producing thousands of ballots every hour for more than 60 nearly-consecutive hours.

The ballots were purchased in cash.

‘Skinny Joey’ Merlino was granted early release from a two-year prison stint earlier this year.  If President Trump is willing to offer him a full pardon for current misdeeds and an expungement of past misdeeds, Merlino would be likely to offer stunning testimony before Congress about how the election was stolen.

It’s thought that Democratic Party operatives working inside Philadelphia’s election office provided Merlino with crates of raw ballots just hours before polls closed on election night, which he transported to two private households in South Philadelphia.  By 10 p.m. that night Merlino’s operation was already generating more than 3,000 ballots per hour, which quickly scaled to more than 6,000 ballots per hour before midnight.

But now, Merlino might just be willing to flip on Biden — in primetime Congressional testimony — if President Donald J. Trump is willing to issue the longtime mobster a full expungement of his decades-long criminal record.  And, of course, Merlino wants to be pardoned for the election fraud itself and any crimes to which he may incriminate himself during his testimony.

“He wants a clean record. He wants to fish and hunt on federal lands.  He’d really like a job with the National Parks Service. You need a clean record to get those things,” explains one confidant.  “But most of all he wants the thanks of a grateful nation for coming forward.”

Some have postulated that Merlino would be well suited to host a new Bravo series under development called “The Real Gentlemen of Philadelphia”, modeled loosely on that network’s ‘Real Housewives’ franchise. That deal could come with a $2 million per season paycheck.

“He wouldn’t mind a little fame — or a lot of fame,” he jokes.  “If he comes forward he’ll probably get a book deal and a movie franchise.”

Political observers believe that Merlino could sell the rights of his story to a major Hollywood production studio for more than $20 million, and a book deal could yield as much as $10 million.

“You have to understand the thing about Skinny Joey is that he is very charismatic and knows how to tell an enthralling story,” the associate explains.  “He’d be an incredible movie narrator, and he’d perform excellently in congressional testimony.  He could hit that testimony so far out of the ballpark that he becomes a superstar instantaneously — a real celebrity presence.”

The damning congressional testimony — being tentatively dubbed ‘The Biggest Heist in Political History’ —  could make it politically impossible for the Republican-controlled legislature in Pennsylvania to certify the State’s 20 electoral votes.