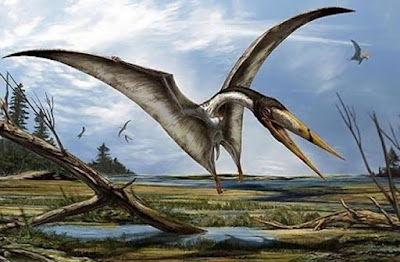 This is interesting as it points us to the fact that pterosaurs were able to taste through their beaks or at least do something useful in confirming their prey.
I do think that the pterosaur made most of its living fishing.  There is evidence they are still about.  Again night fishing really works.  In that case we could have a huge population and know squat.
We do know that a real population exists in New Gimea.  However quite lage ones have been seen in North America associated with nearby lakes.  There is no evidence of roosting though.
However, they can fish all night undewater and then retreat to a river bank mud cave and only move to locate a better lake.  That is a lifeway we would be challenged to uncover.  Catfish provide ample food along with dugouts as well.
Once you eschew the idea they spend their days flying about, their non extinction is sensible.

Palaeontologists have made a surprising discovery while searching through 100-year-old fossil collections from the UK - a new mystery species of pterosaur, unlike anything seen before.


Pterosaurs with these types of beaks are better known at the time period from North Africa,
so it would be reasonable to assume a likeness to the North African Alanqa
[Credit: Davide Bonadonna]

Lead author of the project, University of Portsmouth PhD student Roy Smith, discovered the mystery creature amongst fossil collections housed in the Sedgwick Museum of Cambridge and the Booth Museum at Brighton that were assembled when phosphate mining was at its peak in the English Fens between 1851 and 1900. These fossils found while workmen were digging phosphate nodules were frequently sold to earn a little bit of extra money.


It was while Smith was examining the fossils of shark spines that he made the amazing discovery. The fossils were actually fragments of jaws of toothless pterosaurs, which do indeed resemble shark fin spines, but there are many subtle differences that allow them to be distinguished.


Smith says: "One such feature are tiny little holes where nerves come to the surface and are used for sensitive feeding by the pterosaurs. Shark fin spines do not have these, but the early palaeontologists clearly missed these features. Two of the specimens discovered can be identified as a pterosaur called Ornithostoma, but one additional specimen is clearly distinct and represents a new species. It is a palaeontological mystery.


"Unfortunately, this specimen is too fragmentary to be the basis for naming the new species. Sadly, it is doubtful if any more remains of this pterosaur will be discovered, as there are no longer any exposures of the rock from which the fossils came. But I'm hopeful that other museum collections may contain more examples, and as soon as the Covid restrictions are lifted I will continue my search".

Smith's supervisor, Professor Dave Martill, University of Portsmouth, says: "The little bit of beak is tantalising in that it is small, and simply differs from Ornithostoma in subtle ways, perhaps in the way that a great white egret might differ from a heron. Likely the differences in life would have been more to do with colour, call and behaviour than in the skeleton".


"Pterosaurs with these types of beaks are better known at the time period from North Africa, so it would be reasonable to assume a likeness to the North African Alanqa (pictured below). This is extremely exciting to have discovered this mystery pterosaur right here in the UK.


"This find is significant because it adds to our knowledge of these ancient and fascinating flying prehistoric reptiles, but also demonstrates that such discoveries can be made, simply by re-examining material in old collections."


The research is published in Proceedings of the Geologists' Association.
Posted by arclein at 12:00 AM