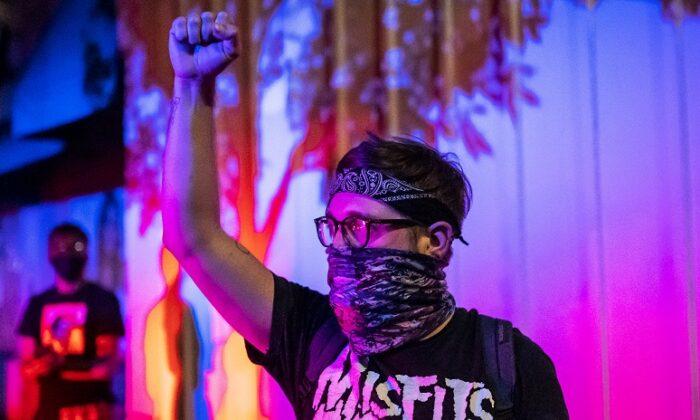 Here are the fine details. For the first time we identify the body of individuals who are leading the agitation.  It is not just the teachers either as the agitators have been out there paying of demonstrators for at least two decades.  The masks have just made it easy to get the fans of this nonsense out.
CCP money is obviously behind this particular wave of activity.  Before all that we had Soros likely channeling other foreign moneys.
A little public shock and awe will send all this back into the weeds.  Accepting CCP money happens to be treason..  WE also need to hammer the Marxist MEME once and for all.  As this point out he was a creep who magically promoted greivance and narcission without ever understanding it all himself.  today we can effectively turn the worm.

Authored by Col. (Ret.) John Mills via The Epoch Times,

As violent protesters have begun to diminish for the time being in areas such as Portland, it is time to reflect upon exactly who is perpetrating the street violence in Portland and other places. Not only who these people are (we’ll get to that in a moment), but what is the trigger that is inciting these people to violence?

One key facilitator is intuitively obvious - it’s the mask. Anonymity gives a sense of boldness to lash out and behave in aggressive ways. The original psychological study that established this proclivity was the famous (or infamous) Stanford study from 1971. This study in many ways established the social phenom of mirrored sunglasses, both as fashion chic and also their popular association with authoritarianism.

The takeaway from the study was that anonymity in many ways encourages behavior that most would not normally carry out. Updated studies in 2010 further validated the association of anonymity with aggressive and unkind acts, and, frankly, the beginnings of violent acts focused on self-gratification.

So, when some insisted the citizens mask up, the first flammable element was established for civil disorder. The order was to mask up—and most everyone dutifully did. Some of the masks were of little medical value, but no one questioned that—anything was acceptable.

In a first in modern human history, an entire populace now faced each other, masked-up. This was the first step toward chaos on the American street. Some didn’t realize the unintended consequences; some did and exploited this opportunity for the next step in manipulating society.
Grievance and Narcissism

The next combustible element put in the pile seemingly was George Floyd’s death. His death was sad and appeared initially to be solely police brutality—facts will be presented, and this will be dealt with in a court of law, that’s our process. However, violence, destruction, and chaos shortly spun out of control after May 25, 2020. It was far more than George Floyd. Many of the rioters were expressing sheer, unadulterated anger. But anger over what?

To get to the core of this anger, one must understand the driving tenets of the psychology of those masked purveyors. The rainstorm of gibberish they are spewing can be boiled down to two things—grievance and narcissism.


And where did they get this gibberish? This often idolized, but rarely understood character called Marx. Marx was a sloven, slothful, and sloppy scatterbrain who shook down rich friends for support while his family lived in abject poverty and filth. He thought big thoughts of grievance and narcissism while his family starved.

The essence of his thought - it’s always someone else’s fault (grievance), and they need to hand over their wealth to support me (narcissism).

Please read or re-read W. Cleon Skousen’s classic, “The Naked Communist” to understand this toxic and cancerous thought pattern. This is the same thought pattern that created the corrosive and destructive “1619” project that is an updated version of Marx’s thoughts.

In conducting the forensics of our current social unrest, we have masks combined with grievance and narcissism. Now all the purveyors of hate and discontent need are the organization and structure to channel their hate and discontent.
School Teachers and Librarians as Social Justice Warriors

Having the organizational infrastructure in place, unionized K-12 teachers and staff are the perfect societal, organized group to take the combination of masks, grievance, and narcissism and operationalize it as the shock troops for taking down the American constitutional system. Rick Moran identified this in his 2017 piece, “Dozens of public school teachers involved in Antifa.” It was a clarion call that something was going on.

The arrest reports from around the country have shown a high number of those arrested are part of the K-12 education system. Often times, arrests from Portland have reflected numbers north of 50 percent. Andy Ngo and others have done an excellent job of documenting this connection - often at great personal risk. The street thugs of Antifa and BLM seem to lose their “bravery” once the mask comes off and they are exposed.
The Puppet Master: China

Now we have all the ingredients. Masks. Grievance and narcissism. Organization and structure. Now all that is needed is some funding and encouragement. The Chinese Communist Party (CCP), under great pressure with a collapsing economy, rising pushback against belt and road initiatives, and an American President who has run over their plans like a bulldozer, has seized on this opportunity to de-stabilize America. It’s now a race to see who can collapse whose country first.

Chinese agents have been handing out “walking around” money - the old school term that American CIA clandestine operations officers used with great operational effect in many foreign countries (Guatemala, Iran) and later in other countries (Chile).

The CCP learned from us and funded the riots of 2020. TikTok enabled the tailored channeling and delivery of grievance and narcissism on a vast scale. The Chinese consulate in Houston was closed in particular for diplomatic officials being identified as enabling street violence.

The FBI Director and Attorney General have now made China Job #1. The conduit of Chinese Communist money has been using the historical path of China and Hong Kong financial transactions to party officials and family members in Vancouver, BC and then converting the wired funds into cash to be snuck into the U.S. for several purposes such as real estate acquisitions.

This CCP funding has been carried over the border into the United States as the walking around money paying Antifa and BLM leaders and street agitators. $250 for smashing windows for the night when the police let me go immediately with no charges? The positive return on investment is clear for all participants. Especially when masks are worn.
The Clear Forensics

Like forensics done on a fire, the chain of events and combination of combustible elements are clear. Masks. Grievance and Narcissism. School Teachers, staff, social workers and such. Foreign funding and meddling by the CCP. The fire forensics are clear on the root cause of violence by Antifa and Black Lives Matter in 2020. The violence has little to do with George Floyd. It’s an insatiable manifestation of grievance and narcissism that will never be satisfied. The answer: Reject the thesis of their argument.

Do not quibble, do not try to rationalize with the mob - reject their thesis and aggressively deal with them - both citizens and all levels of government must lock shoulders and stand against the blind rage of the street mobbery. Once specific personalities are personally held liable for the death and destruction they create, the violence will rapidly go away.

This is not just the masked actors - this includes the state and local leaders and politicians that act in a feckless, hapless matter. Fecklessness may not be a crime, but results count, so citizens, please hold these politicians and leaders responsible through recall petitions and new elections.
Posted by arclein at 12:00 AM