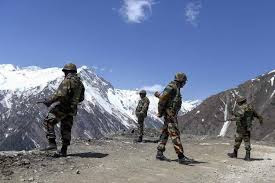 India has fully positioned itself in the Ladakh region of the Himalayas with a strong offensive capable force.  The PLA on the other hand is on its heels surely scrambling to reinforce.  Their current bluster is an attempt to prevent an Indian incursion.

Previous PLA  land grabs have gone unanswered for even decades.  Payback time has to be awfully tempting.

Winter fighting is extremely difficult, but there is plenty of indication here that indian forces have developed the ability.  Snowshoes are easy enough to master for infantry.

This is still not a war of large forces easily confronting each other but I do think it is about infiltration and counter infiltration leading to ambush warfare.  All this can easily make transportation impossible for PLA forces.  All this could make it impossible for PLA forces to be sustained and they may well be forced well back from the LAC during the winter.  It promises to be a miserable time for the Chinese who will find themselves as exposed targets..

In the meantime the Indian forces are now well provisioned and in the mood to scrap with six months in which to play.

Sensibly the PLA should withdraw a long way back.  That will not happen of course.

The key change is that now India will push back hard hereafter, particularly in the Spring of next year.  This includes entering Tibet.

We also observe a blast of missle testing ahead of delivery to the army.  It would be so easy for a pop up air raid on the entire road system supporting the PLA several hundreds of miles in.  This would also knock out Chinese airfields as well.