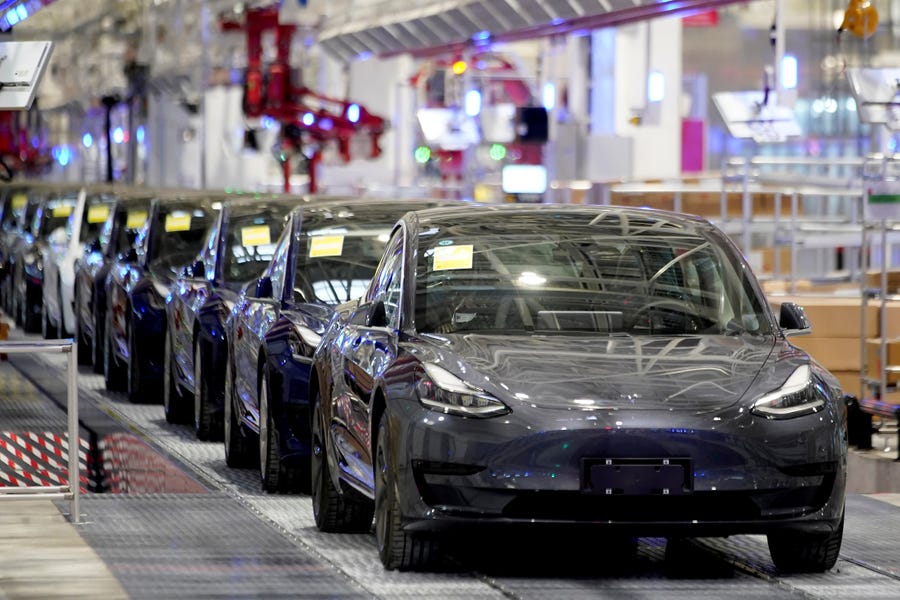 Read and weep if you are a sometime competitor.  The point is that the automobile industry is transitioning to a full electric protocol as it can all work on a battery solution alone anbd long before the implimentation of the original Tesla patent a hundred years old.
Tesla has completely sped the process up by several years at least.
New vehicles coming off the line will soon be entirely electric.  The batteries are now good enough and it is all about price point now.  Cross over on cash flow must also be close.  ...


An auto-manufacturing expert says Tesla's days of production hell have put it '10 years ahead' of the competition
Graham Rapier
Oct 12, 2020, 9:07 AM

Tesla Model 3 vehicles at a delivery event at the company's factory in Shanghai. Reuters

Tesla's manufacturing has improved greatly from the days of "production hell," one expert said.
Sandy Munro, one of the foremost experts on vehicle teardowns and cost analysis, said Model Y production was even more advanced than Model 3 production.
The company improves because it continually evolves its design, something that's helped it get a decade up on the competition, Munro said.

It's been years since Elon Musk was famously sleeping at Tesla's factory during "production hell."

Since then, things have improved so much that Tesla is now a full decade ahead of the competition, according to one manufacturing expert.

"I don't think they really quite understood or grasped the concept of making cars at production speeds," Sandy Munro, who's well known for his cost-analysis teardowns of cars, told a conference hosted by Bernstein last week.

Investors and analysts have clearly noticed the changes. The company's stock price has soared alongside four consecutive profitable quarters, a first for Tesla.


How? "Well, No. 1, they ripped out a lot of robots," Munro said. "I think that Elon thought that somehow robots could take over everything, but in actuality that's been proven wrong in many, many cases."

Musk admitted in April that, while robots are helpful, "excessive automation at Tesla was a mistake."

"Humans are underrated," he added.

But there's another area where Tesla has a leg up on the competition, Munro said: It continually improves on its designs.


"So what Tesla's done is it's cranked out a product that's probably 90%, 95% there," he said. "But they've got so many ways of investigating what's going on in each car all the time that the feedback can say: 'Hey, what I think what we should do is X. Let's make that engineering change and implement it on the vehicles from here going forward, and if or when a customer has a problem, bingo, we don't know how to solve it or we'll replace the parts.'

"If I had to make a choice between the two — getting to 95% and then basically waiting until customers complained and then changing things rapidly, I'd rather take that approach," Munro continued.

That approach seems to be working. Analysts have estimated that Tesla's on track to produce nearly 500,000 cars this year, in line with the company's guidance. Tesla has already released third-quarter delivery and production numbers, which topped expectations. Now, with the Model Y coming off the production line, Munro is impressed.

"I said in the past that Tesla with the Model 3 was probably five to eight years ahead of everybody else," he said. "And now, in some cases, I think that in some areas of the car, Tesla is 10 years ahead, especially when it comes to the manufacturing."


Tesla is set to report its third-quarter financials on October 21.
Posted by arclein at 12:00 AM