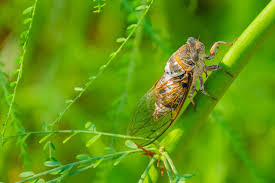 This is not conclusive at all but is at least confirms that we need to figure this out.  Insect populations are under stress and we do not know why.
I am inclined to address our over application of pesticides.  We had exactly this problem with DDT.  By itself it was no problem but it too became a plaything of the agri business which is in the business of broadcast spraying much at the same time.  That knocked the raptors out of the sky.  And no those farm boys did not go crazy hunting them.  Just too difficult.
The problerms are barely studied at all by hte industry and a culture of pretend prevails.
Mobile Phone Radiation May Be Killing Insects: German Study
AFP - Agence France PresseSeptember 17, 2020
https://www.barrons.com/news/mobile-phone-radiation-may-be-killing-insects-german-study-01600356604
Radiation from mobile phones could have contributed to the dramatic decline in insect populations seen in much of Europe in recent years, a German study showed Thursday.
On top of pesticides and habitat loss, increased exposure to electromagnetic radiation is "probably having a negative impact on the insect world", according to the study presented in Stuttgart, which is yet to be peer reviewed.
The analysis of 190 scientific studies was carried out by Germany's Nature and Biodiversity Conservation Union (NABU) together with two NGOs, one from Germany and one from Luxembourg.
Of the 83 studies deemed scientifically relevant, 72 showed that radiation had a negative effect on bees, wasps and flies.
These effects ranged from a reduced ability to navigate due to the disturbance of magnetic fields to damage to genetic material and larvae.
Mobile phone and Wi-Fi radiation in particular opens the calcium channels in certain cells, meaning they absorb more calcium ions.
This can trigger a biochemical chain reaction in insects, the study said, disrupting circadian rhythms and the immune system.
"The study shows that we must keep our eyes open in all directions when analysing the causes of the dramatic insect decline," said Johannes Enssle, head of NABU in the state of Baden-Wuerttemberg.
"The subject is uncomfortable for many of us because it interferes with our daily habits and there are powerful economic interests behind mobile communication technology," Enssle said.
Peter Hensinger of the German consumer protection organisation Diagnose Funk said closer attention must be paid to the possible negative effects of radiation on both animals and humans, particularly with regard to the introduction of 5G technology.
Networks equipped with 5G are expected to offer speeds 100 times faster than existing 4G networks, but the technology has been met with strong opposition from some quarters, especially among environmental campaigners.
This story was produced by AFP. For more information go to AFP.com.
© Agence France-Presse
Posted by arclein at 12:00 AM

some time ago, scientific studies have already cited the loss of the insect world in Europe and perhaps 30% may be what is now left ...

have you noticed that after a rain fall, where are the earthworms? ...

for without the insect biome ... the food chain has been broken ...