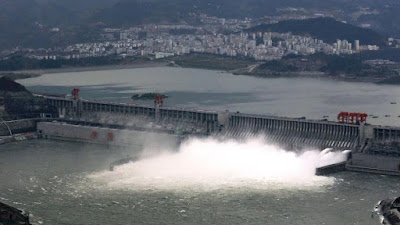 I want to say that the situation around the 3 gorges dam is making me uncomfortable.  Water levels behind the dam have been rising slowly and are presently just short of the 175 meter line.  That is after a large discharge through the opening of the flood gates weeks past.  Yet today those flood gates are not been opened at all.  Common sense suggests that they should now be open to bring levels back down.  Why Not?
When those flood gates were opened we saw images that seemed to show concrete failure of some sort.  More recently images are also showing what appears to be failing concrete.
It is completely plausible that when they opened the flood gates originally, they experienced serious damage to the structure and can no longer operate the gates without major repair.
The other known problem is that the dam did distort at well  some time ago.  This is likely a continuing problem.  We can imagine the dam as a string of bricks sitting of a flexible foundation.  Pressurization will produce distortion and hopefully recovery.  Provided all calculations are correct and not too many shortcuts were taken in construction.
This is the biggest such dam ever attempted.  Are you still comfortable?  A slowly failing dam should exhibit concrete failure.  Now the real question is whether it is all fixable.
A dam like this can be saved by partial decommissiong with a lower spillway to bring the pressure head down to a safe level.
In the meantime they are reporting that they are topping the reservoir up until may 2021.  Coming in late to this story i lack comparables.  In the meantime the whole Yangtze yalley is terribly flooded and i presume we are counting on the winter to drain it all.
We need an independent inspection, and that is not forthcoming, to dispell what is a rising body of speculation.