The War over Hayek’s Intellectual Legacy: A Response to John Gray 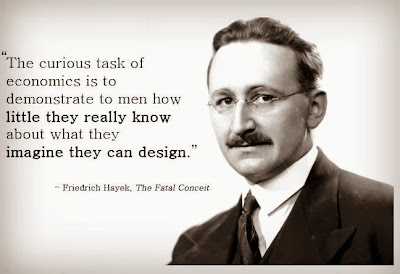 It is hard to say much when economists discuss something called the market.  All lack a good understanding and know its natural weaknesses either.


Markets need a form of regulation properly scaled to the capabilities of the participants who also need to be expanding in number but never in dominance.  Get it wrong and crisis ensues, yet there are plenty of incentives to temporary get it wrong.


Our more serious problem happens to be monopoly dealing in many industry sectors brought about by excess capital often used to buy out small participants who are acting as price setters.  This distorts the whole sector until excess collapses the sector..


Economists keep trying to rationalize the use of excess monetary policy to affect economic outcomes.  They are always the men with the hammer banging on a nail.  Yet that has always taken judgement and that is always risky.  Choices can be wrong.


The War over Hayek’s Intellectual Legacy: A Response to John Gray

According to British philosopher John Gray, economist F.A. Hayek failed to grasp the fundamental inefficiency of capitalism, held to an a historical theory of business cycles, misunderstood the Great Depression, and offered policy recommendations that would have been disastrous had any government listened.

Gray offers these critiques in the July 30 issue of New Statesman, in an article on the life, intellectual achievements, and mistakes of the renowned Austrian economist and Nobel laureate. Gray even claims that Hayek’s greatest intellectual rival, John Maynard Keynes, was the better economist of the two.

Gray’s analysis is full of problems.

Hayek on the Impossibility of Central Planning

Gray begins by writing that while Hayek was right in his critical analysis of socialism and central planning, he failed to realize that the same criticisms apply to the market economy.

According to Hayek, central planning is doomed to fail because of the natural limits of human knowledge. For him, the main function of the market system is to provide a method for the fast and efficient transmission of information between individuals, which facilitates economic cooperation. This is possible thanks to the free and unrestricted interaction between supply and demand that forms market prices. The variations in their values immediately signal to entrepreneurs which goods or services and production processes are likely to be more profitable investments. (Hayek elaborates these ideas in his famous essays “Economics and Knowledge” and “The Use of Knowledge in Society.”)

Hayek’s criticism of socialism is based on this theory of the market as a system for the transfer of knowledge and information. In a state-planned economy, where a market price system is missing, the central administration that manages the whole production and supply of goods and services has no way of knowing what the consumer preferences are, much less the most efficient way of satisfying them. Consequently, there is no way to know if the resources employed in production are being employed efficiently.

This uncertainty makes central planning a particularly unstable economic system, which leads to a massive waste of resources. According to Hayek, this waste is the primary reason for the collapse of all socialist states throughout the world.

Gray concedes the truth of this analysis, but adds that “the problem is that it also applies to market capitalism.” According to Gray, the market is prone to commit serious errors that lead to an inefficient distribution and employment of resources. Gray claims that the market, like the planned socialist economy, lacks a self-regulating mechanism. He says that history offers many examples of mass irrational manias that have fueled speculative market bubbles, led to unsustainable economic booms, and eventually created deep and painful crises and recessions.

Now, after critiquing Hayekian market arrangements for booms and busts, Grey prescribes a larger dose of Keynesianism. That means the government should intervene to smooth out business cycles.

Gray then proceeds to counter another famous position of Hayek’s: his contention that the primary cause of the Great Depression in the 1930s was the serious monetary expansion undertaken by the central banks (specifically in the United States) in the years prior, a position that marks one of the main and starkest differences between his economic paradigm and Keynes’s. According to Gray, however, “There were booms and busts long before the emergence of modern central banking.” (This argument is part of his claim that the market lacks a self-regulatory mechanism.)
Gray needs to review his history.

Hayek’s theory, adapted from his mentor Ludwig von Mises, tells us the following: when the state, through a specific central-bank policy, causes an increase in the money supply, this monetary inflation leads to unsustainable production booms and the formation of speculative bubbles that are doomed to burst sooner or later.

Gray’s claim that we know of speculative market bubbles from before the dawn of central banking is false. The earliest speculative bubbles are “tulip mania” in 17th-century Holland and the South Sea Company and Mississippi Company bubbles in the early 18th. All three conform to Hayek’s theory.
Each of these early speculative bubbles was preceded by
Gray should review the histories of the Bank of Amsterdam, founded in 1609; the Bank of England, in 1694; and France’s Banque Royale in 1718. (See also the work of Selgin and White on boom and bust banking.)

After his critique of Hayek’s primary economic theories, Gray attempts to paint Keynes in a much brighter light, as an economist who was more precise and fundamentally correct in his analysis of socioeconomic realities.

According to Gray, Keynes’s practical experience as an investor and speculator on the stock market gave him the edge over Hayek. Keynes, he says, “understood — in a way that the inveterately professorial Hayek did not — the ineradicable uncertainty of economic life.”

Why, then, was it Hayek, and not Keynes, who in February 1929 predicted the coming market crash? (Meanwhile, Keynes was telling the Swiss banker Felix Somary that “there will be no more crashes in our lifetime.”)

Gray contends that Hayek’s policies, had they been implemented during either the Great Depression or the so-called “stagflation” of the 1970s, would have had disastrous effects on the economy.

Because no government ever did follow Hayek’s recommendations, we are left with economic theory to argue for or against Gray’s contention. Keynes’s policies, however, can be studied as part of economic history.

As an economic doctrine, Keynesianism had reached its peak popularity in the United Kingdom and the United States in the period immediately after World War II. In the 1950s and ‘60s, the British government almost exclusively followed orthodox Keynesian policy recommendations, which led to the infamous stagflation during which high levels of unemployment accompanied high levels of inflation — an impossible combination, according to Keynes.

The worldwide consensus among economists now is that the crisis was caused by the continuous “stimulation” of the economy through high government spending, chronic deficits, and an ever-expanding money supply.

Orthodox Keynesianism was discredited, which allowed more free-market oriented economists, such as the Chicago school’s Milton Friedman, to gain some prominence and a wider audience for their policy recommendations. These recommendations were eventually adopted, at least partially, by Ronald Reagan and Margaret Thatcher.

For some reason, Gray ignores this history.

While it is true that Keynes attracted more adherents among both economists and policy makers, it is far from clear that Hayek somehow “lost” his debate with Keynes.

The picture John Gray paints of Friedrich Hayek misrepresents Hayek’s legacy, ignores his actual scholarship, and distorts reality.
Posted by arclein at 12:00 AM