Norman Wells is close to the Arctic Circle and those trees you see are as large as they get.  What is way more important is the range of plants that he is able to grow successfully.
What this does do is confirm the agricultural viability of the boreal forest.  We have already identified bull rushes as an excellent fodder crop and pine nuts as a food staple to be produced on soil scant rocky terrain.  This garden confirms a wide range of additional food crops quite able to support husbandry.
Add in the uses of fish husbandry as well and we have a major food resource.


After a three-year break, Norman Wells, N.W.T. farmer Doug Whiteman is getting ready to pull another harvest of Canada's most northern potatoes out of the ground.

The hiatus was caused by an outbreak of redroot pigweed on his three-acre field.

"It was just taking over the field so severely that it was not only competing with the plants we were trying to grow for water and nutrients, but it was also making it really hard to harvest in the fall time with the old potato combine that we've got," Whiteman said.

​So Whiteman let his field lie fallow for three years, periodically taking a weed whacker to the pigweed in an effort to kill the seeds and let the stalks replenish the soil with nutrients.

He's only planted on one acre out of three, choosing to let the other two stay fallow for another year.
Whiteman said he's also spacing plants farther apart in an effort to boost yields. He estimates he'll produce between 5,000 and 6,000 pounds of potatoes this year, down from the 30,000 he was churning out before his three-year break.

"I'm not looking for a big crop [this year]. I'm just focusing on yield," he said.

Whiteman is also growing turnips, radishes, cabbage, beets and other vegetables, and says they're all doing well.

He'll start selling potatoes door to door in Norman Wells and Tulita in September and October, he said. 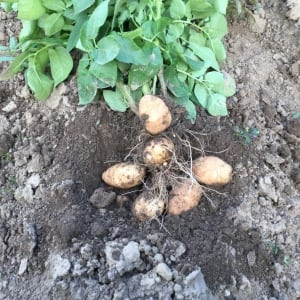