How China's Currency Policies Will Change the World 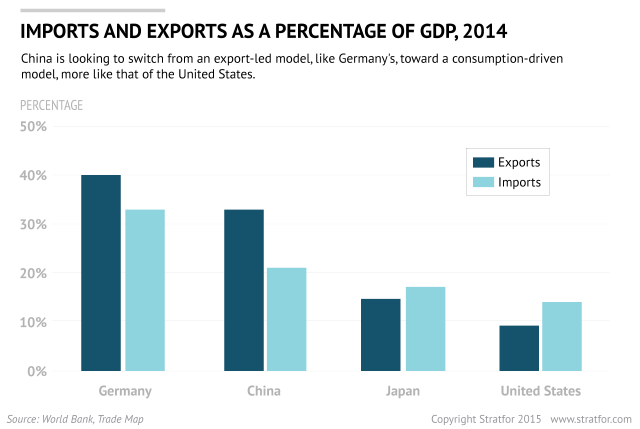 China is significant enough now to certainly be at the table.  Soon enough, so will India.  Yet it is difficult to see radical shifts taking place.
That is because we are experiencing massive deflation and there is little evidence that this will end soon.  Monitory policy is merely limiting the damage.  This may not appear obvious  but wages have not risen at all for almost forty years and this has been accommodated by cheaper goods.  This is not inflation.  At the same time the rent for money has reached a stunning low.

This has led to asset appreciation only in housing which usually is backed by a government guarantee.  This is deeply mature and can go no further.

I do not think that China is yet significant enough to radically change any of this.

.
How China's Currency Policies Will Change the World

The recent fluctuations in China's currency typify the best and worst of a globalized world, where developments in one place can instantly change the political and financial calculations of governments in others. For most of human history, the communities, cultures and economies of the world existed independently of one another, separated as they were by vast distances and difficult terrain. It would, for instance, take months or even years for news of China to reach Europe across the great Silk Road trading route during the height of its use some 1,000 years ago. Even then, the communities along that route could hardly be considered entirely coherent.

But that is clearly no longer the case. And now, as China continues to adjust the yuan, markets throughout the world will react accordingly, even as they react differently.

There were several reasons behind China's decision, but it nevertheless came as a surprise to many. In search of stability, China has tied its currency to the U.S. dollar since 1994, usually at a low value relative to the dollar. During the 2000s, the connection helped China keep its exports competitive, with the developed world consuming its output. The West's economic collapse in 2008 meant that this model could no longer function, and China began trying to grow consumption levels so that the domestic consumer might come to fill the hole left by the faded international market.

Transforming from an export-led economic model to a consumption-led one could be described as changing from being like Germany to being like the United States, and China has tried to reproduce some of the advantages that the United States has created for itself in the same role. One of those advantages is the dominant position of the U.S. dollar in world trade, which means U.S. consumers can go deeply into debt and global demand for dollars will delay the moment at which this comes to a head by those debts being catastrophically called in. Thus China sought to grow international usage of the yuan, making strides in its attempts to do so. The next step would be for the yuan to be accepted into the International Monetary Fund's "currency," the Special Drawing Right. However, the IMF has said that China would need to liberalize its currency before such a step could take place. The IMF makes the decision every five years, with one originally set for November this year, though the institution recently announced that any changes will not be implemented until October 2016.

Meanwhile, the peg to the dollar aided China's strategy as the strengthening dollar over the past two years enabled the yuan to rise alongside it relative to the world's other floating currencies, empowering Chinese consumers and helping the changeover from an export- to consumption-based economy. But low global demand has not created a good climate for such change, and growth has been unsteady during this period, slipping to 7 percent this year. The baton pass from an export-driven to consumption-driven economy is risky, and exports need to hold up long enough for the Chinese consumer — and building blocks such as the reserve currency — to develop. When export numbers for July showed an 8.3 percent fall year-on-year, all signs seemed to point toward a loosening of controls, which would both please the IMF and, if the Chinese currency continued to weaken as many in the market expected it to, help boost exports.

In the globalized world, where every economy is interconnected with every other economy, the effects of a shift like China's can be felt everywhere. The world's largest economies have tended to move in concert throughout modern financial history, with central banks choosing to tighten or loosen interest rates, often in quick succession. But actions over the past two years have diverged from the rule. While one group is now considering raising interest rates for the first time since 2008, another group is still pursuing quantitative easing programs, which are partly designed to devalue currencies and stimulate growth. China's dislocation from the dollar, particularly if the yuan devalues further against the dollar, moves the country from the first group toward the second, with clear consequences:

Following the 2008 crisis, the United States and the United Kingdom were arguably the first to adopt forthright monetary policies to stimulate their economies. Quantitative easing was pursued on both sides of the Atlantic, and, possibly as a result, these two economies have led the recovery in the past few years. Consequently, for the last 12 months the financial world has focused on a key question: When will the U.S. Federal Reserve raise interest rates for the first time since 2008? The Bank of England is wrestling with a similar dilemma. The interest rate rise will be seen as the first step toward "normality" following the extended period of ultra-low rates, and capital has flowed from emerging markets to the United States in anticipation.

Only sporadic growth and low productivity levels, along with stubbornly low inflation figures in both countries, have caused their central banks to delay the rate rise, but recent strong job creation figures led many in the market to expect the United States to make the change in September 2015 (and the United Kingdom in early-to-mid 2016). The U.S. economy does not particularly rely on exports, insulating it from some of the drawbacks of currency strength, which usually hurts exports. But China's latest move creates another currency against which the dollar can appreciate. Now, a rate hike would likely strengthen the dollar even more, to the extent that it might become an issue for the U.S. economy. China's reshuffle, then, may have changed the answer to the biggest financial question of the year; market expectations for the rate rise have slipped back to December and may even move to 2016.

Emerging markets have suffered a torrid few years. Commodity exporters in Asia, Africa and Latin America enjoyed a boom period between 2000 and 2008, when China was consuming their raw materials as part of its production machine and Chinese investment sustained prices for a few years after. But global commodity prices have fallen since 2011, with the economies of Brazil, Nigeria, Russia and several parts of Asia suffering the most, as evidenced by their steadily falling currencies. The yuan's depreciation reduces China's spending power, and unsurprisingly emerging market currencies have continued to decline. Every time the yuan weakens, it creates more problems for these countries, as many welcomed Western capital during the good times and now have sizable dollar-denominated loans on private balance sheets that are becoming harder to pay back. 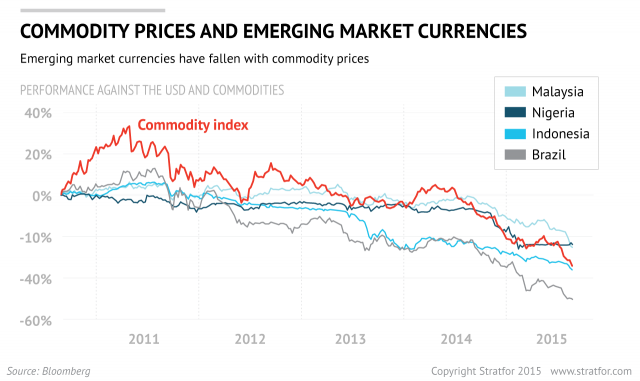 Japan and the Eurozone

Meanwhile, the depreciating yuan has made Japan and the eurozone's currencies float upward. The development is problematic because both have undertaken quantitative easing policies, in part to devalue their currencies.

Since coming to power in December 2012, Japanese Prime Minister Shinzo Abe has been pursuing a three-pronged strategy designed to shock Japan out of its economic funk of the past two decades. The first of these "arrows" has involved monetary easing, partly to drop the yen's value and stimulate export-led growth and inflation. The plan has not been working. Inflation has remained stubbornly far below its 2 percent target, exports in July were down from the year before, and growth has been highly unreliable, with second-quarter GDP shrinking at an annualized rate of 1.6 percent. Even before China's currency reorganization, talk had begun that the pace of quantitative easing, already redoubled in 2014, would need to be boosted further. Falling Asian currencies relative to Japan will only increase these calls, but there are complications to redoubling quantitative easing. 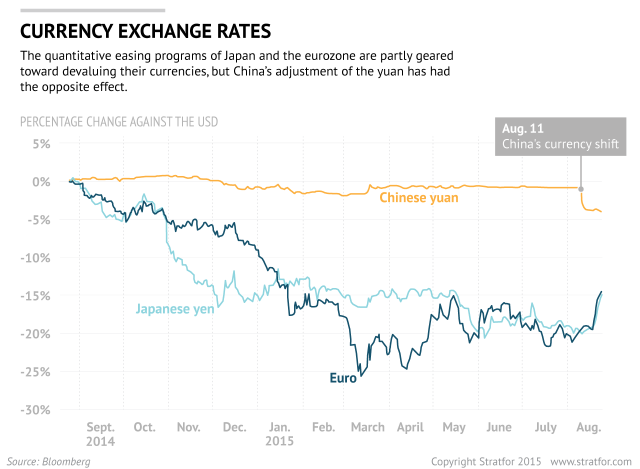 So-called Abenomics has been losing public support. Even within the administration, Abe and Bank of Japan head Haruhiko Kuroda have been divided on the best way to proceed. The former has pushed for more easing. The latter, perhaps more aware of the complications from the Bank of Japan already owning a sizable portion of the available market in Japanese sovereign bonds, has pushed for fiscal consolidation. This difference of opinion over Abe's decisions, such as to delay a planned consumption tax hike, and other policies regarding Japan's military, have garnered the administration its lowest popularity rating since coming to power (in July it was 38 percent, down from 46 percent in June). Abe's grand experiment is on the ropes, constraining the prime minister's ability to double down both politically and economically. The time may be approaching for Abenomics to be called off. Under such circumstances, it is hard to imagine Abe remaining in his post.


In Europe, the European Central Bank's quantitative easing program has also weakened the currency, improving eurozone economies. Talk about the ECB extending quantitative easing past its scheduled end in September 2016 has already begun. The decision would not technically be as problematic as in Japan, since Europe's quantitative easing has not gone on as long and the ECB could overcome any lack of available bonds by extending its own self-imposed limits to purchase more sovereign bonds. Still, if Europe considers extending its program, there could be difficulties convincing Germany of quantitative easing's merits, potentially creating undue political issues at a time when the Continent is already deeply fragmented.
Posted by arclein at 12:00 AM