How Many People Can Planet Earth Sustain? 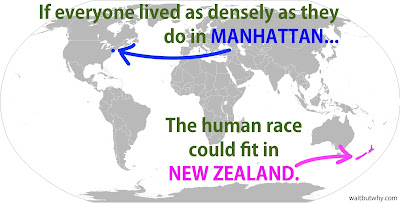 We studied this problem rather deeply and went at it quite differently  I asked what the planet can comfortably sustain.   I eventually came to the conclusion that 100 billion is not unreasonable.  This at least makes present concerns premature.

By the way that is fully optimizing the Earth's land surface with scant effort to expand onto the continental shelves which happen to be both practical and plausibly attractive.   These would supply a market for land based production as well and eliminate land based cities.  Since land diversion ends, population stacking becomes possible and the population can readily expabnd to the limits of land based food production hugely increased by human labor.

In that case we can expect even larger numbers.

Most important is that we increase our expectations regarding the planets carrying capacity.
.

How Many People Can Planet Earth Sustain?

Why the Population Bomb Is a Dud
Thursday, August 27 2015

Asked whether or not the growing world population will be a major problem, 59% of Americans agreed it will strain the planet’s natural resources, while 82% of U.S.-based members of the American Association for the Advancement of Science said the same. Just 17% of AAAS scientists and 38% of Americans said population growth won’t be a problem because we will find a way to stretch natural resources.
— Pew Research Center

“If humanity is to have a long-term future,” writes James Dyke at the Conversation, “we must address all these challenges [of population growth] at the same time as reducing our impacts on the planetary processes that ultimately provide not just the food we eat, but water we drink and air we breathe. This is a challenge far greater than those that so exercised Malthus 200 years ago.”

Thomas Malthus was a pioneer in political economy who wrote a famous 1798 essay on the dangers of population growth. Nowadays, environmentalists concerned with “sustainable growth” typically invoke Malthusian concerns as they recommend government interventions.

Free-market thinkers tend to reject such “solutions” as unnecessary, but beyond the technical policy debate, there is also a strand in the free-market community that embraces population growth with optimism.

The crux of Malthus’s original essay was that unchecked populations grow exponentially, whereas food production grows — at best — linearly. The following passage sums up the bleak Malthusian view of life:


The power of population is so superior to the power of the earth to produce subsistence for man, that premature death must in some shape or other visit the human race. The vices of mankind are active and able ministers of depopulation. They are the precursors in the great army of destruction, and often finish the dreadful work themselves. But should they fail in this war of extermination, sickly seasons, epidemics, pestilence, and plague advance in terrific array, and sweep off their thousands and tens of thousands. Should success be still incomplete, gigantic inevitable famine stalks in the rear, and with one mighty blow levels the population with the food of the world.

The Malthusian mindset explains Paul Ehrlich’s runaway bestseller The Population Bomb and the popularity of the “zero population growth” (ZPG) movement in the 1960s. Ehrlich said, “The mother of the year should be a sterilized woman with two adopted children.” (Advocates of ZPG over the years have differed on whether their goal could be achieved purely through voluntary sterilization and restraint versus government controls.)

How does a free-market economist respond to modern-day Malthusianism?

We should first make the obvious point that people in the private sector are just as capable of extrapolating population figures as government officials. Indeed, as I explained in “Are Markets Myopic?,” market prices — particularly in futures markets — give private owners the proper incentives to balance current consumption against future uses, even for nonrenewable resources. It is, in fact, democratically elected government officials who are myopic, since their control over such resources is fleeting.

Higher population allows for a greater division of labor, as well as more inventions that can be easily scaled.

To illustrate the shortcoming of a naïve natural scientific perspective on these issues, consider an anecdote from my high school years. I remember that my biology textbook asked us to consider a petri dish with a population of bacteria that would double every day. By stipulation, the bacteria would completely fill the dish — and thus hit the ceiling of its “carrying capacity” — on the 30th day. The textbook then delivered the stunning observation that on the day before this crisis, the dish would only be half full. The textbook’s point, of course, was to warn that trends in biology were not linear, and that crises could develop rapidly out of apparent tranquility and abundance.

If my classmates and I learned this principle in high school biology, then presumably at least some traders in the Chicago agricultural commodities markets have thought about it, too. If Earth’s population will grow more rapidly than food production over the next decade, then the spot prices of wheat, soybeans, and beef will eventually skyrocket as the crunch sets in. If the crisis of population growth is “obvious” to academics the world over, then this growth would be factored into market prices and food prices would already be high in anticipation of the future disaster.

Although there are sophisticated arguments involving the “negative externalities” of climate change, generally speaking, the possible dangers of excessive population growth would manifest themselves in the form of higher prices for raising children. Couples would voluntarily reduce their (biological) family size as real estate prices, tuition, health care, and food prices rose faster than wages to reflect the impending crunch. There is nothing for government officials to do in this area except to get out of the way and let market prices do their job, as opposed to subsidizing population growth through poorly designed welfare systems, “free” government schooling, and similar programs. People in the market make horrible forecasting decisions all the time, but government policies typically reinforce those flaws in human nature rather than counteract them.

As with any serious thinker, Malthus’s real work was imbued with nuance. Rather than making him a hero of progressive interventionists, one could hold up Malthus as a pioneer in understanding the importance of market institutions in encouraging responsible decision making when it comes to family size. However, if we focus on the narrow empirical prediction that exponential population growth must outstrip food production, then Malthus was simply wrong, or at least he has been so far. The “green revolution” is the shining example in the more general history of human ingenuity overcoming obstacles, especially in the context of relatively free markets. Julian Simon famously won a bet with Ehrlich predicting that the prices of key commodities — which he let Ehrlich and his colleagues choose — would fall during the 1980s.

In his own work, Simon stressed human creativity and adaptation as the “ultimate resource.” When typical Malthusians look at humanity, they see billions of bellies that must be filled. Instead, Simon saw billions of brains that could produce a new strain of crop, discover a cure for cancer, or develop a new technique for locating oil deposits.

When typical Malthusians look at humanity, they see billions of bellies that must be filled.

One of Simon’s most compelling arguments is to point out that human labor is the one resource that has consistently become relatively more scarce over the centuries. Specifically, the amount of labor time that the typical worker needs to spend in order to earn the wages for buying other resources has dropped dramatically. (Robert Bradley provides some compelling graphics on the topic.) If the Malthusians had been right, then labor would have become relatively abundant and superfluous, with commodity and energy prices rising far more than wage rates.

As the population grows, two competing forces affect living standards. On the one hand, higher population allows for a greater division of labor, as well as more inventions that can be easily scaled. (The work of J.K. Rowling and Steve Jobs would not have been nearly as valuable on a tropical island with 100 people.) On the other hand, there are finite limits on certain resources — such as standing room on Earth, for the foreseeable future — and thus at some point further population growth drives down average wages.

Nonetheless, the market contains the proper incentives to allow individuals to make informed choices about procreation. Furthermore, experience to date has definitely come down on the side of the optimists. So far, free societies have proven “the more, the merrier” to be true. Wherever population growth appears to fall into a Malthusian trap, we find excessive statism, not free markets and private property rights.
Posted by arclein at 12:00 AM