Camelot Chicanery - The Politics of Deception 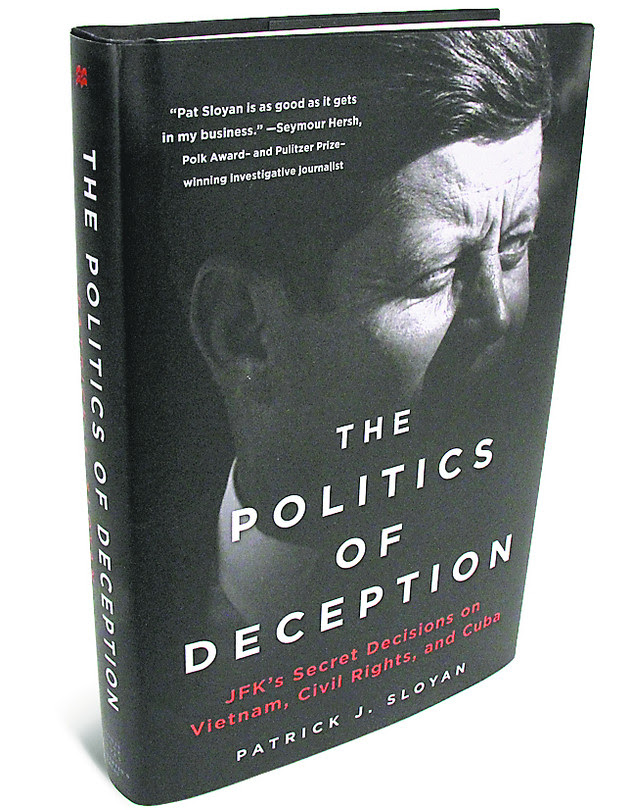 History is a harsh judge and slowly we are learning just how wrong things went under Kennedy.  I have just completed the book by Sloyan and what rings through is how much Kennedy failed to control his own advisers..  Reagon got a taste of all that with Ollie North, but Kennedy was swimming in it.

We also forget the environment.  Russia was visibly promoting adventurism and not hesitating to tweak the US nose.  We find Keneday engaged in a semi hot series of conflicts all been blamed on him when they inevitably blew up.  Thus he had to make mistakes and most were errors of been the wrong guy for this particular part of his task.  Yet most of his advisers were worse.  The only one who came through making sense was Johnson whose simply had the greater maturity.

In the end, he allowed his 'brain trust' to promote the overthrow and Assassination of Diem. This left the government of Vietnam without a natural accepted political leader to oppose a communist takeover.  The Junta of generals who did replace him were all jumped up Sergeants originally trained under the French who had zero political support.  I do not think there was a strategic bone in their bodies and defeat became inevitable.

Worse, Kennedy felt that he could not walk away politically because he had mishandled the Cuban file among others, at least according to the press.  So it could only get worse.  Kennedy made the first blunder and Johnson was unable to run afterward.  That was left to Nixon.

Yet i still want to say something.  The USA absorbed a huge effective lesson regarding insurgency.   They applied it elsewhere so effectively that all forms of Communist promoted insurgency withered away.  At the same time the ten year war drew in Soviet resources into one target preventing any further adventurism at all.  This is an argument about what the Soviets did not do but they did change their behavior.
.

Fearful of losing Southern votes, JFK was cool to the civil-rights movement until Bull Connor’s hoses and dogs forced him to act.


Robert K. Landers
Feb. 17, 2015 7:16 p.m. ET
Patrick Sloyan was a young reporter in United Press International’s Washington bureau when John F. Kennedy’s presidency began in 1961. “At UPI, we doted on Kennedy, who seemed to dominate our daily report,” he recalls. In “The Politics of Deception,” the Pulitzer Prize-winning journalist takes a disillusioned look back at the final year of this “inspired, devious, ruthless man, more pragmatic than principled,” who, Mr. Sloyan contends, let his concern about winning a second term take him to “the darker side of Camelot.”

The covert efforts to assassinate Fidel Castro, begun during the Eisenhower administration, were “high on [Kennedy’s] agenda,” Mr. Sloyan writes. Kennedy also let Attorney General Robert Kennedy sanction the wiretapping of Martin Luther King, which led (after JFK’s death) to FBI Director J. Edgar Hoover’s effort to discredit King with information about his extramarital activities. Fearful of losing Southern votes, Kennedy was cool to the civil-rights movement, Mr. Sloyan notes, until Bull Connor’s fire hoses and dogs in Birmingham, Ala., in May 1963 forced the president to move “to the front of the moral crusade.”

During the Cuban Missile Crisis, Kennedy’s combination of toughness and restraint helped the U.S. avert a nuclear war. In the aftermath, however, he contrived to publicly put the onus of wanting a Munich-like appeasement on Adlai Stevenson, his United Nations ambassador. Stevenson had suggested confidentially during the October 1962 crisis that the U.S. remove NATO missiles in Turkey to get the Soviet missiles in Cuba out—the very deal that Kennedy had secretly made and now feared might become known, hurting his re-election chances. Embarrassing Stevenson was a way to knock down rumors of the deal (which remained hidden for decades).

In his account of the crisis, however, Mr. Sloyan embraces the myth that the secret deal was crucial to its resolution. He even asserts that Nikita Khrushchev’s Cuban-missile ploy “was designed to remove the American threat in Turkey.” He provides no evidence for that assertion, aside from Khrushchev’s resentment at the NATO missiles’ proximity. Mr. Sloyan ignores evidence from the Kremlin archives showing that, before getting word of Kennedy’s promise to withdraw the Turkish missiles, Khrushchev had decided “we must retreat” and accept Kennedy’s offer of a U.S. pledge not to invade Cuba in return for removing the Soviet missiles. The secret promise, though wisely made, was unnecessary. Mr. Sloyan calls it “Kennedy’s finest moment as president.”

A less fine moment had occurred in 1961, when Kennedy decided that Laos, under siege from insurgents aided by Soviet arms and Hanoi’s Viet Minh army, was the wrong place to send U.S. combat troops. He directed diplomat Averell Harriman to get a treaty withdrawing all foreign forces and establishing a new “neutral” coalition government. “In reality,” Mr. Sloyan observes, “neutrality meant concessions to the communists—primarily to Hanoi and its relentless goal to seize South Vietnam.”

The Politics of Deception

Harriman made concession after concession and threatened South Vietnam President Ngo Dinh Diem with the loss of U.S. support if he did not go along. Diem finally relented and agreed to a treaty “exposing his country’s flank to an unchallenged assault by the communists in Hanoi,” as Mr. Sloyan puts it. Harriman conceived a lasting dislike for the patriotic Vietnamese president who had dared to cross him. At the U.S. Embassy in Saigon, the Ho Chi Minh Trail, Hanoi’s supply route through Laos to its guerrilla forces in South Vietnam, was dubbed the Harriman Memorial Highway.

The episode that Mr. Sloyan treats most extensively is Kennedy’s encouragement of the coup d’état in South Vietnam that resulted in Diem’s assassination and a fateful quantum leap in America’s responsibility there. Mr. Sloyan’s account of the machinations in Washington and Saigon is fascinating and adds telling details to Ellen J. Hammer’s fine 1987 history, “A Death in November.”
Advertisement
With the prospects of his re-election often on his mind, Kennedy came under increasing pressure in the summer of 1963 to do something about the Diem regime, thanks in no small part to what Mr. Sloyan charges was “one-sided,” erroneous reporting by the New York Times’s David Halberstam about the Diem government and the Buddhist-protest crisis that erupted that June.

On Aug. 24, 1963, when Kennedy was aboard a yacht off Cape Cod, he let himself be manipulated by Harriman and others into approving a cable encouraging a coup. Henry Cabot Lodge, the prominent Republican that Kennedy had appointed as ambassador to South Vietnam, also favored a coup. Over the succeeding months, Kennedy blew hot and cold about the risky move. Just days before the Nov. 1 coup—with his top military advisers warning of the chaos to follow—he gave Lodge, in Mr. Sloyan’s words, “a reluctant green light.”

When Diem and his brother Ngo Dinh Nhu were hiding in a Saigon church, Diem desperately phoned Lodge. Kennedy had ordered that the U.S. should not actively support either side in a coup in progress. Lodge, who “had shrugged off White House orders all along,” notes Mr. Sloyan, obeyed this one: He offered Diem asylum in the U.S. embassy but no help in getting there.

After the call ended, Lodge’s top assistant, a former combat soldier, pleaded with him to let him drive to the church and bring Diem and Nhu back. “We can’t get involved,” Lodge told John Michael Dunn (as Dunn himself informed the author). Later that day, after they learned of Diem’s assassination, Lodge cut short Dunn’s attempt to discuss what had happened by abruptly turning the subject to dinner. “What time are cocktails?” he asked.

Kennedy wasn’t the author of every sordid detail in this episode, or others in “The Politics of Deception,” but, as he said about the Bay of Pigs debacle in 1961, he was “the responsible officer of the government.”
Posted by arclein at 12:00 AM