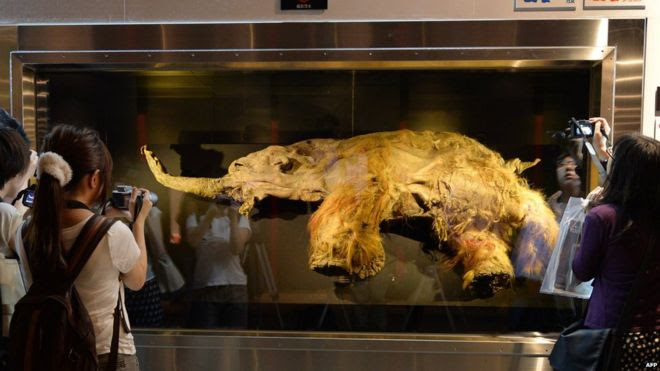 The gold rush has begun.  Restored animal populations will gain massive public support and scientific investment for literally decades.  A facility like this will mine every sample for genetic information.

That leads to reconstruction even if it happens a bit at a time.  sooner or later it becomes possible to transition an elephant embryo toward the correct DNA to allow the emergence of these extinct animals.  That will include the mammoth and the mastodon.


At the same time we can expect to see the whole Pleistocene menage developed concurrently as we become more adept.

By News from Elsewhere... ...as found by BBC Monitoring

Russia has opened a laboratory in Siberia devoted to the study of extinct animal DNA in the hope of creating clones, it's reported.

The new lab in Yakutsk - often called the world's coldest city - will "seek out live cells with a view to cloning", says Semen Grigoryev, director of the Mammoth Museum at the city's Northeastern Federal University. He tells Ogonek magazine that "the priority is to look into bringing back the mammoth", adding that the Beijing Institute of Genomics and South Korea's Sooam Biotech company, which has pioneered dog cloning, will be involved in the study.

Earlier this year, researchers at Harvard University announced they had copied 14 woolly mammoth genes into the genome of an Asian elephant. The scientists at Yakutsk's new facility hope that their own unrivalled collection of 2,000 or so remnants of prehistoric animals, ranging from primitive dogs and horses to mammoths, will help to identify quality cell tissue from which to extract useful DNA.

The story has provoked considerable excitement in Russian social media, with many speculating about whether this will lead to the birth of an actual mammoth hybrid. But others ask whether the priority should actually be to help save existing species which are on the brink of extinction, rather than trying to revive those which have been gone for thousands of years.
Posted by arclein at 12:00 AM