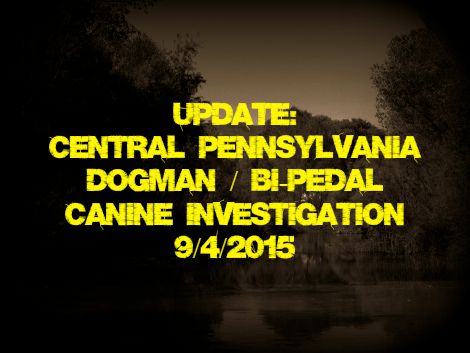 This is possibly the most important report to come forward as yet.  It is made by experienced bushmen who got a really good eyeball on the creature.  The long forelimbs are clearly observed and the narrow frame as well.  That eliminates a lot of guesswork.

I have had little doubt that we are dealing with a Giant Sloth.  All identified reports are all conforming to the same creature very consistently.  We can draw it pretty well now.  Canine like features help immensely but this is certainly no member of the canine family.

Again the limbs are engineered for an arboreal existence which explains why this creature has never been successfully cornered by dogs as happens regularly to cougars.  I suspect that this creature hunts cougars as well.

After all it has long sharp claws on all limbs and these are ideal for tearing a victim apart. Recall that we finally have a recent track that gave us two toes which was long expected by this researcher..


9/3/2015 - I am currently a resident of Altoona, PA. I am writing this to report a strange encounter I experienced with a friend of mine in the early morning hours of Sun. March 17th, 2013. The incident is now over two years old. I chose not to report this event prior to now due to an unwillingness to expose myself (or my family and friends) to public scrutiny. In light of the recent spate of similar sightings in Central Pennsylvania, I have changed my mind. Perhaps our experience will help with the current research. As such, I would like to make my intention clear that myself and any persons mentioned please retain anonymity at this time. Reporting a “Bigfoot” or even a UFO sighting is one thing, but this is somewhat different.

On the evening in question, a friend and I were returning from a job that I had performed in Williamsburg, PA. My friend was driving. To the best of my recollection, the incident occurred somewhere between 1:30 a.m. and 2:00 a.m. on the morning of March 17th. We were traveling SW on Rte. 22 through what is locally known as, “Geeseytown”, a rural suburb of Hollidaysburg, PA. As we rounded a little curve in the road our attention was drawn to our left on the opposite side of the road. Standing/squatting in a clearing a few feet off the side of the road was some kind of creature. My friend wasn’t driving very fast and slowed a bit as we approached. Our initial view of it was from its dorsal side, as it was facing away from us. It came into profile as we passed with its right side to us. It struck me immediately that the creature had a combination of both human and canine features. It was squatting down on its legs close to the ground, but was doing so in a bi-pedal fashion. The legs had the stifle joint and hock characteristic of a canine, not like a human leg. It had its front limbs/arms in front of it, and I believe it was possibly crouched over something, maybe a smaller animal. The arms were long in proportion to its body. I recall thinking the hands were more human-like as opposed to paws. Its torso seemed to be somewhat hunched forward. I had the impression that at any moment it could have gone to all fours quite comfortably. The creature’s chest was not broad like a human’s, but had a pronounced forward angled breastbone like a canid. It gave an impression of great strength, having distinct and well defined musculature, but was not built on a massive frame. It seemed more thin and sinewy. If it had stood fully erect, I would estimate that the creature would have been close to seven feet tall. It was covered in fur that was grayish-silver in color. The creature seemed unnaturally shiny, although this could have been a reflection from the headlights or the moon. It had pointy erect canine ears that were somewhat layed back on its head. The head was large and very wolf-like in overall appearance. The muzzle was also very wolf-like/canid although the snout wasn’t exceptionally elongated. It had canine like teeth. To the best of my recollection the eyes were an amberish color, but may have had a reddish glow/reflection to them. It had a wolf-like tail. It turned its head to watch us and tracked us as we passed. It seemed quite aware of our presence.

My friend and I continued in stunned silence for a few moments. When the creature was no longer in view, I turned and asked my friend what we had just seen. “We just saw a (f**king) werewolf” were his exact words. I agree that that was pretty much my own assessment. I asked if he would turn the car around, but he absolutely refused to do so. We spent the rest of the trip debating as to whether it could have been a dog or even someone’s escaped pet wolf, but to be honest, it just wasn’t. I’m sure of that. Both my friend and I are experienced outdoorsmen and neither one of us have ever seen anything fitting that description before. I was actually raised not far from the area and know it quite well. I have spoken to my friend about this and either one of us would be willing to take a polygraph concerning this incident. Please feel free to contact me about any questions you may have. Thank you, Name withheld

I had the opportunity to speak to both witnesses. Each mentioned a interesting point...that this creature had a 'silvery' aura around it. That's a very unique detail and may be an important point. This sighting, in particular, has raised my hackles a bit...because it suggests that a supernatural aspect may exist with this being.

Butch Witkowski and I are familiar with some of the folklore associated with the Lenni-Lenape (Delaware) people, who inhabited central Pennsylvania for many generations. Butch has already consulted a Cherokee shaman / elder who was referred to him by an associate. I plan to research more of the Lenni-Lenape traditions for possible links to this being.

All updates will be posted on Phantoms & Monsters.

We are asking any and all witnesses to come forward with information. You can remain anonymous...you will have our strictest confidence.

We will be sharing sighting information with other researchers in order to comprehensively cover all reported areas. This is a serious investigation and we want to be diligent when gathering evidence. A broad boots-on-the-ground investigation is planned to begin shortly. 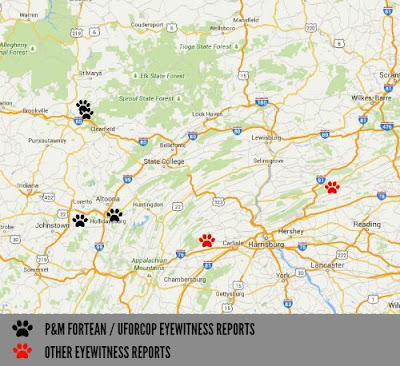