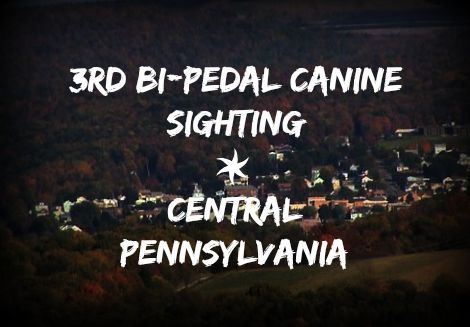 Our friend the giant sloth again.  It seems to also be hanging out at this locale and this may be part of its hunting range.  I do want to say something though.  This creature has a lower than normal metabolism and i would expect it to take serious punishment before you stopped it.

I would want to hit it with three heavy .303 or similar weight rather quickly before it got to me. It also happens to be extremely dangerous and it does police up its kills in order to cache them..

We do not get much information here but we do get enough to confirm it is the same animal as seen before.  The number of independent reports is surely approaching fifty or so.

I received the following report on Monday...I contacted the witness by telephone shortly thereafter:


I am sending this to you in light of hearing about some other recent PA sightings so I wanted to share my experience.

This first encounter happened to me about 4 weeks ago. I am a 42 year old woman of sober mind and I am not prone to embellishing. I have a 5 pound chihuahua and an 80 pound pitbull that I walk around town every evening. This encounter happened at around 8:00-8:30 pm, just after dusk. The streetlights were on. There is a town park in Portage that lies on the edge of some woods. I would guess that the park is around 25 acres or so. I walked the dogs through the park and then decided I wanted to go around the block on the back side of the park. There is a main road that runs along side of the front of the park and a dirt road that runs along the back side of the park. The roads meet at a streetlight. I was on the main road and got within about 25 yards of the streetlight and there was a huge figure, about 7 feet tall I estimate. It was standing just back from the light and I could see just the legs. They were hair covered and bent backwards like a dog. I could not make out a face or other details as it was standing back. Keep in mind I had my two dogs with me and the pitbull is extremely protective. The first thought I had was "oh shit, that is a big damn dog" and then it dawned on me what I was seeing. My next thought was "it is a freaking werewolf"!!! It was rocking side to side like it was waiting for us to get closer. That is when I yanked both leashes and ran towards home. If it were a dog (note that this thing was about 7 feet tall) it would have chased me and my dogs like a normal dog would do. It just stood there pacing from one foot to the other side to side. It was standing on 2 feet, not on all fours. My dogs did not seem to sense anything and there was no reaction from them which I found very strange. Perhaps that thing was down wind and the dogs did not see it because this all happened so fast. I got home and told my fiancee what had happened and he did not make fun of me, he believed me. He encouraged me not to go that way again.

Well, guess what? I went that way the next night because I had convinced myself I was seeing things. This time I took the dirt road that circles the back side of the park just to prove myself wrong. It was not quite dusk so it was still pretty light out and the woods are on either side and there are no houses in this particular area. I got to within 150 feet of where I saw this thing and my chihuahua started growling and all of his hair was standing up. He started barking and going in circles looking for what ever it was that he sensed. No reaction at all from the pit. She is feisty and not afraid to fight intruders so that really surprised me. About the same time the little dog was freaking out there was a HUGE crash in the woods next to us, maybe 10 yards away of so. This area is very swampy and there are quite a few large bushes and trees. This crash sounded like a tree falling, but like it fell instantly. It was lound, fast and instant. I ran out of there so damn fast. I did not see anything this time other than my dog freaking out and the large crash. I did not think I could move that fast :-) I got home safe and vowed to NEVER take that trail again. Please keep in mind that this trail is very heavily used by cars and people daily. That is what strikes me as so odd to see/hear something like that there.

Well the next morning I put the dogs out to pee and they both freaked out and started growling, hair standing up and running up and down our fence sniffing and digging at it. They get excited when they smell something that should not be there, i.e. another dog or such, but this is now how they were behaving. The acted very agitated and almost scared. It truly makes me wonder if something followed us home that night.

Needless to say if I walk the park I stay away from the back side. The dogs get agitated when we are on the front side and they can smell in that general direction. They will growl and whine. I always carry a loaded handgun no matter where I go, but something tells me that it would not help if that thing wanted to "meet".


So that is my story, every word true. You can take it for what its worth. I would be VERY curious to know if you have had other reports of things in my area. Of all the years I have lived here and been on the back woods trails I have never felt fear or saw anything out of the ordinary. Now I am scared to walk in town. I would MUCH rather be in the woods and I have actually started walking those trails instead.

I would truly appreciate if you would let me know of other sightings in my area if you have had reports. I am about an hours drive from Penfield and I am aware of things going on there as well. Thank you for your time Lon and I appreciate your work. J


NOTE: In my conversation with the witness, they indicated the area has several abandoned coal mines...which would be great for sheltering a large beast. The witness learned of the previous sightings and our contact information after listening to Butch Witkowski's recent appearance on 'Darkness Radio.' Lon 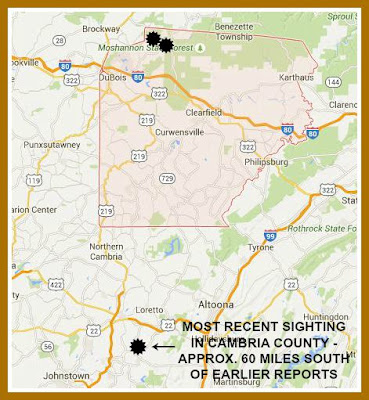 UPDATE: since posting this account earlier today, I have received a new report in Blair County and some indication of similar activity in Cumberland County. As soon as I receive more information, I will post another update...Lon