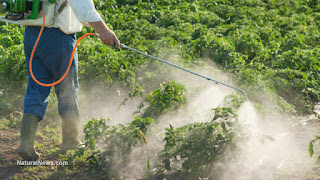 .The battle to curb fraud in the pesticide industry continues and must continue. The delusion that you can trust the opinion of a paid scientist must be ended.  They more that any are armed with the tools needed to lie and cheat.

Then they have massive incentives along with prestige and promotion by their clients.  It is impossible to resist.

Europe is clearly getting it act together and i expect to see major curbs there..

(NaturalNews) In what proponents are calling a "landmark" decision in favor of transparency in Europe, the EU Court confirmed in a recent ruling that protecting health and the environment is a higher priority than protecting the confidentiality of experts who have, at times, changed risk rules.

As noted in a press release from the organizations ClientEarth and Pesticide Action Network Europe, making such contributions public "helps stop undue pressure from industry affecting decisions which impact on our health and the environment." The two organizations sued the European Food Safety Authority (EFSA) over the latter's refusal to publish the names of so-called experts giving testimony and opinions about the safety of chemicals used in foods.

"The chemicals used in our food have a huge effect on our health and environment. Before this case, the people making the decisions about whether these chemicals are safe were often closely linked to the companies producing them," ClientEarth attorney Vito Buonsante said. "This ruling means we know who is declaring these substances fit to use, and where their loyalties might lie. It is a victory for transparency, people and the planet."

Both organizations predicted that the ruling would have a major and positive impact on all scientific decisions that are made by the EU while safeguarding the openness of the continent's decision-making processes.

As reported by GM Watch, a food safety advocacy group that monitors the use and spread of genetically modified foods and seeds, the organizations' lawsuit was triggered by the EFSA's decision to gut a progressive EU law regarding pesticides that was established in 2009. The regulation "demands the regulators consider studies from the open peer-reviewed literature when evaluating pesticides, and do not restrict themselves to secret industry studies," the group said on its website.

The EFSA was tasked with creating guidance documentation that advised the industry on how it should comply with the regulations when compiling documentation to support regulatory approval of new pesticides.

However, the EFSA's final guidance, which was issued in 2011, essentially neutered the new regulation by removing provisional requirements. The final rule stated that the reliability of scientific studies regarding risk assessment can be based on the Klimisch criterion, which was established by H.J. Klimisch and others employed by biochemical giant BASF.

GM Watch noted that the European Commission's Scientific Committee on Emerging New Health Risks also touted the use of the Klimisch criterion in the performance of risk assessments in 2012.

However, as GM Watch reports further:

Klimisch allows only one criterion for classifying a study in the most reliable category: Was it done according to Good Laboratory Practice (GLP)?

The problem with this is that in general, only industry studies are done according to GLP.

The game is rigged

The GLP system details how studies are carried out and subsequently documented. It was established by regulators to fight widespread scientific fraud throughout the industry in relation to testing chemicals for the purpose of creating new regulations. However, GM Watch noted that the system is not an indicator of good science and never has been.

That's because the criteria all but exclude most independent - as in non-industry sponsored - studies from being taken into consideration when mulling regulatory action on the wild claim that such studies provide limited or zero reliability. In their view, apparently only industry-sponsored studies are on the up and up.

"Independent scientists generally don't use GLP; nor have they traditionally been expected to," notes GM Watch. "They have their own quality control process in the form of peer-reviewed publication, which involves external scrutiny of the work, transparent publication, and possible replication."

A report from the Pesticide Action Network notes that despite this system of checks and balances, independent studies are often ignored when it comes to assessing the risks of pesticides.
In other words, the game is rigged.