Bernie Is Wrong: Trade Is Awesome for the Poor and for America 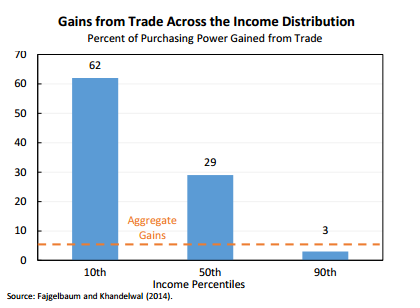 
The purpose of government regulation is to selectively inhibit trade for a common good. Where it goes wrong is that the common good is interpreted by the king against the general interest of other traders to benefit the king.  Socialism wishes to use the same tool in order to make the select few live like kings.


True socialism must function using a rule of twelve governance to channel local decisions to the State level to insure the common good is met.  This has not been done yet.

Otherwise it is interesting that old fashion socialism is finding a fresh audience again.


.
Bernie Is Wrong: Trade Is Awesome for the Poor and for America

Sen. Bernie Sanders, the Democratic presidential hopeful, is no fan of free trade. In an interview with Vox, Sanders’ made his anti-trade position clear: “Unfettered free trade has been a disaster for the American people.”

He also noted that he voted against all the free trade agreements that were proposed during his time in Congress and that if elected President he would “radically transform trade policies” in favor of protectionism.

Sanders and his ilk accuse their intellectual opponents of promoting “trickle-down economics,” but that is precisely what he is advocating when it comes to trade. The argument for protectionism ultimately relies on the belief that protecting domestic corporations from foreign competition and keeping consumer prices high will somehow benefit society as whole.

However, the real effect of protectionism is to increase monopoly and consequently reduce overall economic welfare. In fact, according to a paper by economists at the Federal Reserve Bank of Minneapolis, “Government policies…such as tariffs and other forms of protection are an important source of monopoly” that lead to “significant welfare losses.”

In contrast to Sanders’ assertion that the expansion of free trade has been a disaster for the American people, there is a near unanimous consensus among economists that the opposite is true.

An IGM Poll of dozens of the most renowned academic economists found that, weighted for each respondent’s confidence in their answer, 96 percent of economists agreed, “Freer trade improves productive efficiency and offers consumers better choices, and in the long run these gains are much larger than any effects on employment.”

When the vast majority of economists of all sorts of ideological stripes agree that free trade is a good thing, maybe, just maybe, they’re onto something.

In fact, they surely are. Using four different methods, economists at the Petersen Institute for International Economics estimated the economic benefits from the expansion of technology that facilitates international trade (such as container ships), as well as the removal of government imposed barriers to international trade (such as tariffs). Since the end of World War II, they generated “an increase in US income of roughly $1 trillion a year,” which translates into an increase in “annual income of about $10,000 per household.”


This result is mostly driven by the fact that foreign businesses produce many goods which are used in the production process at a lower cost than their domestic competitors. Access to these low-cost foreign inputs allows American businesses to decrease their production costs and consequently increase their total output, making the nation as a whole much wealthier than it otherwise would have been.

Moreover, contrary to common conjecture, the benefits of international trade haven’t simply accrued to the wealthy alone. Low and middle income individuals tend to spend a greater share of their income on cheap imported consumer goods than those with higher incomes. As a result, international trade tends to benefit these income groups more so than the wealthy.

Indeed, according to the President’s Council of Economic Advisers, middle income consumers have about 29 percent greater purchasing power as a result of international trade.

In other words, middle income consumers can buy 29 percent more goods and services as a result of the access to low-cost imports from foreign countries.

On top of that, international trade has provided benefits by bringing new and innovative products to American consumers.

According seminal research by Christian Broda of the University of Chicago and David E. Weinstein of Colombia University, the variety of imported goods increased three-fold from 1972 to 2001. The value to American consumers of this import induced expanded product variety is estimated to be equivalent to 2.6 percent of national income, about $450 billion as of 2014. That’s not exactly small change.

The spread of free trade has also made considerable contributions to environmental protection, gender equality, and global poverty reduction. As a result of the spread of clean technology facilitated by freer trade, “every 1 percent increase in income as a result of trade liberalization (the removal of government imposed barriers to trade), pollution concentrations fall by 1 percent,” according to the Council of Economic Advisers.

The CEA also has found that “industries with larger tariff declines saw greater reductions in the [gender] wage gap,” suggesting that facilitating foreign competition through trade liberalization reduces the ability of employers to discriminate against women.

In regards to global poverty reduction, research has shown that in response to US import tariff cuts, developing countries, such as Vietnam, export more to the US, leading to higher incomes and less poverty.

Despite the large gains from trade America has already reaped, there is still room for improvement (contrary to Sen. Sanders’ accusations of “unfettered” free trade). The PIIE economists estimate that further trade liberalization would increase “US household income between $4,000 and $5,300 annually,” leading the them to conclude that, “in the future as in the past, free trade can significantly raise income — and quality of life — in the United States.”

Ultimately, the conclusion that most economists seem to reach is that, from being a disaster, the expansion of free trade has been a tremendous success, and that further trade liberalization would most likely make Americans, and the rest of the world, considerably better off.


Don’t let fear-mongering about foreigners and China scare you: free trade benefits everyone, especially the poor, while protectionism benefits only the politically powerful.
Posted by arclein at 12:00 AM