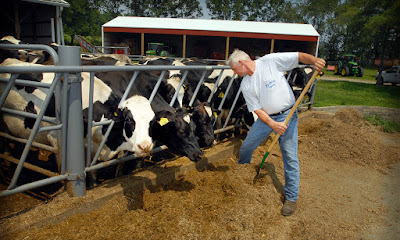 Farm internships are now a thing and this letter does a quick survey regarding viability.
The change that is taking place is that industrial agriculture is obsoleting out.  What is coming is restoritive agriculture implimenting organic methodologies.  This is highly amenable to farm leases and incremental ggrowth.
All this makes the future promising for those willing.
###
The time couldn’t be more ripe to start a new farm or ranch. Local food producers have been in demand during the pandemic, as locavore activity has soared.
But which states are better if you want to start a Green Acres life or to be at Home on the Range where the cattle and horses roam?
LawnStarter, America’s leading outdoor services provider, compared the 50 states across 44 key metrics to rank the Best States to Start a Farm or Ranch. We looked into the infrastructure, prevalence, environmental factors, cost, and potential returns of farming and ranching in each state.
How did the states fare? Here are the top 5 and bottom 5 performers, followed by some highlights and lowlights from the findings.
Best States to Start a Farm or Ranch
Rank State
1 Kentucky
2 Oklahoma
3 North Dakota
4 Texas
5 Montana
Worst States to Start a Farm or Ranch
Rank State
46 Hawaii
47 Rhode Island
48 Connecticut
49 Maine
50 Alaska
Highlights and Lowlights:
Home on the Range: Nine of the top 10 states are fully or partially within the central Great Plains. It’s easy to see why this broad, sweeping landscape dominates the top of our ranking. States such as Kansas, Oklahoma, and Texas boast cheap land, an excellent growing climate, and a highly developed infrastructure for farmers and rural residents. Move to the Great Plains, and you’ll be chasing cattle in no time.
Down and Out in the South: While the Deep South is known as an agricultural destination, many states, such as Louisiana and Alabama, rank middle to low on our list. Both states fare well in cost and return-on-investment categories, as do other southern states like Mississippi. But the South’s achilles heel appears to be both infrastructure and prevalence. Louisiana ranked lower than any other state in the number of new farms in the last year, showing a marked decrease. All three mentioned states rank in the bottom five on Community Supported Agriculture, as well. The Deep South has many charming qualities, but new farm-friendliness is not among them.
Leaving the West Behind: California performs surprisingly poorly in our study. While the No. 1 agricultural state when it comes to return on investment, the Golden State also ranks as the worst state for cost metrics, having the highest average per-farm production expenses of any state. It may also prove more difficult to establish a new small ranch or farm in an already crowded corporate field: California ties with a few other states for the lowest share of family-owned farms. California may be an excellent place to grow food, but it’s far from the best state for your growing agribusiness.
Sweet Kentucky Bourbon: The No. 1 state on our list is a bit unexpected: Kentucky. Yes, it’s a largely rural state with plenty of fertile land, but why is it the best? While ranking high in prevalence categories such as farms per state area and the share of family-owned farms, the Bluegrass State wins with a more well-rounded approach, ranking in at least the top 20 in every metric category. Many other states have competing metrics that cancel each other out: high populations and crop yields can lead to equally high land prices and less available land. Kentucky — much like it’s bourbon — sits right in that middle sweet spot to be the best state for new farmers and ranchers.
Our full ranking and analysis can be found here: https://www.lawnstarter.com/blog/studies/best-states-to-start-a-farm/
Please reach out if you have any questions or would like to interview our managing editor about the study and findings.
Thanks,
Patricia Davis
Communications Manager
(512) 601-0508
media@lawnstarter.com
814 San Jacinto Boulevard
Austin TX 78701
Posted by arclein at 12:00 AM

I would have liked to have reviewed the details about the states rankings, but the web link was apparently not accurate. The link in question is: https://www.lawnstarter.com/blog/studies/best-states-to-start-a-farm/