Scientists use microwave oven to turn coal into graphite

This is really unusual.  It also looks to be cost effective as well.  We are looking at the high volume production of nano sized graphite dust from finely ground coal.  i suspect fine size detetrmines the graphite particle size.
Inasmuch as graphite and coked coal is extremely difficult to crush, this happens to be a viable route to produce small particle size ahead of actual conversion to graphite.
Thus, we may have a useful bulk source of industrial graphite.  imagine a titanian graphite concrete structure.  stuff like this becomes imaginable at least.
Scientists use microwave oven to turn coal into graphite
Valentina Ruiz Leotaud | January 10, 2021 | 7:00 am Energy News Suppliers & Equipment USA Coal Graphite
Coal mine in Wyoming. (Reference image by Greg Goebel, Wikimedia Commons).
https://www.mining.com/scientists-use-microwave-oven-to-turn-coal-into-graphite/
An international team of researchers demonstrated that pulverized coal powder can be converted into high-value nano-graphite in just 15 minutes.

In a study published in the journal Nano-Structures & Nano-Objects, the scientists explain how they created an environment in a microwave oven to successfully convert raw coal powder into nano-graphite, which is used as a lubricant and in items ranging from fire extinguishers to lithium-ion batteries. 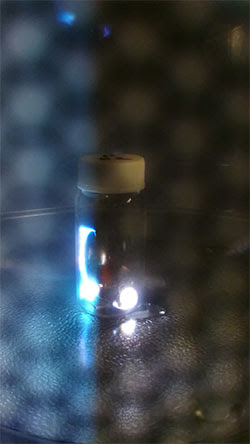 In a microwave oven, sparks are generated inside a glass vial containing coal powder and copper foil. The result is polycrystalline graphite. (Image courtesy of the University of Wyoming).
This “one-step method with metal-assisted microwave treatment” is a new approach that, in their view, could represent a simple and relatively inexpensive coal-conversion technology to make good use of Wyoming’s Powder River Basin coal.
According to the team led by TeYu Chien from the University of Wyoming, while previous research has shown that microwaves can be used to reduce the moisture content of coal and remove sulphur and other minerals, most such methods require a specific chemical pretreatment of the coal. In their experiment, however, the only treatment performed was to grind raw Powder River Basin coal into powder.
That powder was then placed on copper foil and sealed in glass containers with a gas mixture of argon and hydrogen, before being placed in a microwave oven.
“By cutting the copper foil into a fork shape, sparks were induced by the microwave radiation, generating an extremely high temperature of more than 1,800 degrees Fahrenheit within a few seconds,” Chris Masi, lead author of the paper, said in a media statement.
The high temperatures, then, transformed the coal powder into polycrystalline graphite, with the copper foil and hydrogen gas also contributing to the process.
The group – which also includes researchers from New York, Nepal and China – believes that this new method of coal conversion could be refined and performed at a larger scale to yield both higher quality and quantity of nano-graphite materials.
Posted by arclein at 12:00 AM