Earth Isn't the Only Ocean World in the Solar System 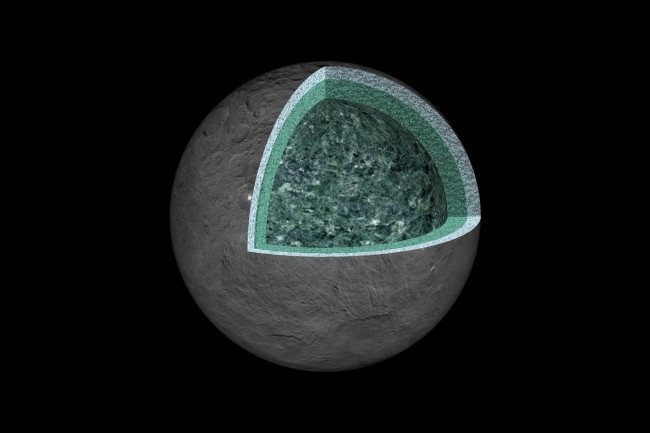 It is pretty clear that planet formation also includes the production of water as well.  I will go a lot further than that.  Most of that water is subsumed in the planet's crust in most cases.  Without an atmosphere, any surface water is disassociated into free hydrogen which may well escape.
That explains the smaller inner planets.  Yet not so as we get further out.
As I have also posted, my own Cloud Cosmology suggests that all our planets are in fact hollow shells built around a central 'star' which produces a steady stream of elements to form up the crust and this crust naturally collects water.  this takes a long time and that water in Earth's case has partially flooded the outer surface.  This is all impossible using Newtonian Physics.  My new understanding of physics allows this.
..

Earth Isn't the Only Ocean World in the Solar System
Watery worlds like Ceres — a dwarf planet in the asteroid belt — hint that our solar system is wetter than we thought. And where there's water, there might be life.
By Eric Betz
December 11, 2020 7:00 AM


The icy dwarf planet Ceres appears to hold a subsurface sea. This discovery fuels the hunt for life beyond Earth. (Credit: NASA/JPL-Caltech/UCLA/MPS/DLR/IDA)

Crouched in the rocky confines of the asteroid belt between Mars and Jupiter, an icy sphere the size of Texas has been hiding a secret. This dwarf planet, called Ceres, is actually an ocean world, astronomers revealed in 2020. And it’s far from the only one: Scientists have found the best evidence yet that Pluto (also located in a distant part of the solar system strewn with small space rocks) has an active underground ocean, as well.
The search for alien life is really a search for water, and half a century ago, Earth’s oceans seemed unique. But in recent decades, evidence of liquid water oceans has emerged in dribs and drabs at places like Europa and Enceladus, the icy moons orbiting Jupiter and Saturn.
Astronomers say they’re piecing together a surprising view of a wet solar system with many hidden potential abodes for life. That finding is “one of the most profound discoveries in planetary science in the Space Age,” says astronomer Alan Stern of the Southwest Research Institute, who also heads NASA’s New Horizons mission to Pluto.
Ceres boasts more water than any world in the inner solar system other than Earth. That was a major reason why NASA sent the Dawn probe to Ceres, where it entered orbit in 2015. But many expected that even if it once had an ocean, any liquid would now be frozen into its thick and icy crust.
Yet, as Dawn approached, the spacecraft’s cameras revealed a number of strange white spots, most prominently inside the 57-mile-wide Occator Crater. That find proved key to explaining Ceres’ history.
In a series of seven papers published in Nature last August, NASA scientists say the best evidence suggests that a space rock struck that world’s surface some 20 million years ago, where it punched a hole into its ice-rich crust. The impact tapped into a deeper reservoir of salty water. As a result, icy chemicals have erupted through fractures in the ice from a subsurface pocket of ocean that resembles Utah’s Great Salt Lake.
Meanwhile, a new analysis of data from NASA’s New Horizons mission to Pluto, combined with fresh modeling of the world’s formation, suggests that the dwarf planet developed early on in our solar system’s history, with a liquid ocean. But how could such a small world keep a liquid ocean from freezing?
Previously, astronomers had suspected Pluto formed from cold bits of rock and ice that slowly clumped together and heated until they melted the water, which eventually refroze over billions of years. But a new study, published in June in Nature Geoscience, takes a different approach.
The team behind the study says they found no evidence of compression features on Pluto’s surface, such as cracks, which would indicate a cold start. Instead, the dwarf planet’s surface features make more sense if it was shaped hot and fast, forming in less than 30,000 years from an onslaught of impacts. Those impacts would leave Pluto hot, with a liquid ocean still warmed by radioactivity today. It’s not just Pluto, either. There are several other potential dwarf planets in the outer solar system that should have formed the same way.
Beyond changing astronomers’ minds, the findings could help build momentum for follow-up missions to these previously overlooked small worlds. Stern and members of the New Horizons team are now trying to sell NASA on a Pluto orbiter mission. And, on the same day the Dawn team presented its latest results, scientists submitted a NASA-funded study looking at the feasibility of sending a $1 billion spacecraft to land on Ceres and search for signs of water, or even life. “Ceres is a lot closer and it’s a lot easier to get to than these moons in the outer solar system,” says Carol Raymond, principal investigator of NASA’s Dawn mission. “It is a very enticing target.”
Posted by arclein at 12:00 AM