Is Breadfruit the Climate Change-Proof Food of the Future? 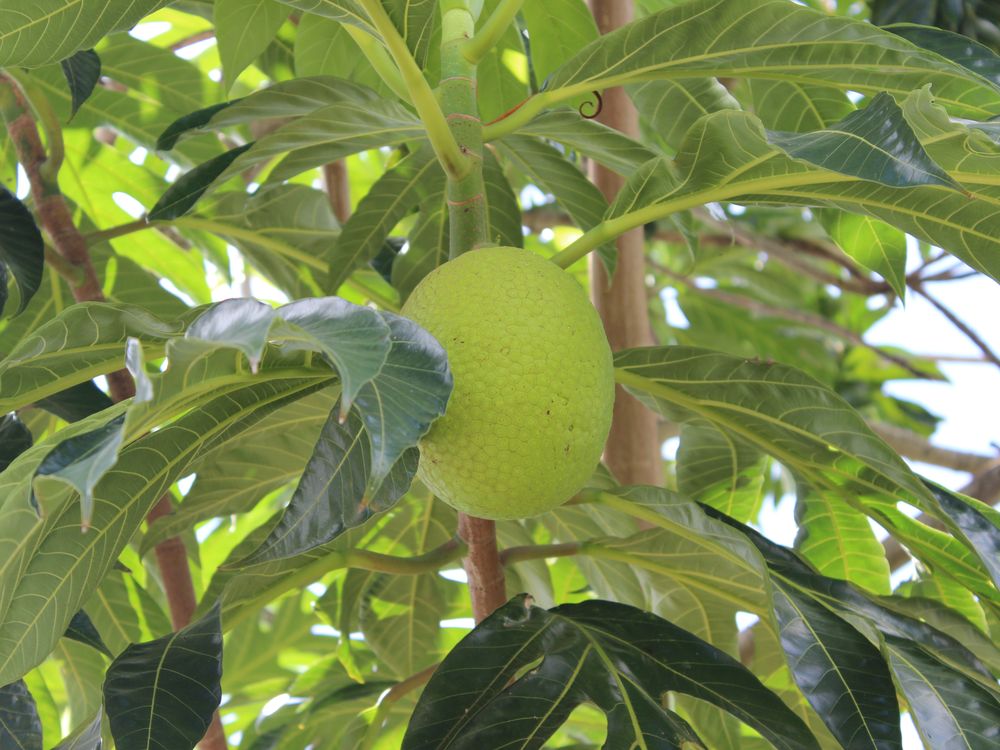 Breadfruit culture really needs to be fully industrialized. It can even be used to make flour which becomes super useful. I have posted on the possibility of acorn flour which has history but this opens up all tropical soils, simply because it happens to be a tree.


We cannot use tropical soils without making biochar which takes a long time to optimize.  This is completely different the moment we industrialize it.
The immediate take home is that this is a short cut for fully exploiting all tropical soils.  thing breadfruit and mangoes to create massive productive food forests all feeding into processing facilities.

.
Is Breadfruit the Climate Change-Proof Food of the Future?
New research suggests it will fare better than our current staple crops under warming conditions
Sarah Kuta
Daily CorrespondentAugust 30, 2022 11:11 a.m.
Breadfruit grows on trees. Courtesy of Nyree Zerega / Northwestern University / Chicago Botanic Garden
https://www.smithsonianmag.com/smart-news/is-breadfruit-the-climate-change-proof-food-of-the-future-180980665/?
Whether fried, fermented, roasted or eaten raw, breadfruit is a versatile food that’s played an important role in Oceanic cuisine for thousands of years. Now, as the climate continues to shift because of human actions, the fruit could increasingly play a role in addressing global hunger, according to a paper published this month in the journal PLOS Climate.
Past research has found that yields of staple crops like corn, soybeans, wheat and rice may decline in the future because of climate change, especially in regions close to the equator. But the dimpled, lime-green crop of the breadfruit tree seems to be more resilient to rising temperatures and increased rainfall variability, the new research suggests.
To predict how breadfruit might fare in the years to come, researchers modeled future climate scenarios between 2061 and 2080. If greenhouse gas emissions stabilize, a scenario that would still include some warming, they found that the tropical and subtropical areas suitable for growing breadfruit would decline by just 4.4 percent. If human activity follows a “high emissions” path, those areas may decline by a stunningly similar 4.5 percent.
The researchers also note that breadfruit cultivation could expand to new areas, such as sub-Saharan Africa, where the crop hasn’t yet been grown broadly. As most varieties are seedless, breadfruit has little to no chance of becoming invasive in areas it is introduced to, researchers say.
“Breadfruit is a neglected and underutilized species that happens to be relatively resilient in our climate change projections,” says Daniel Horton, an Earth and planetary scientist at Northwestern University and one of the study’s authors, in a statement. “This is good news because several other staples that we rely on are not so resilient… As we implement strategies to adapt to climate change, breadfruit should be considered in food security adaptation.” 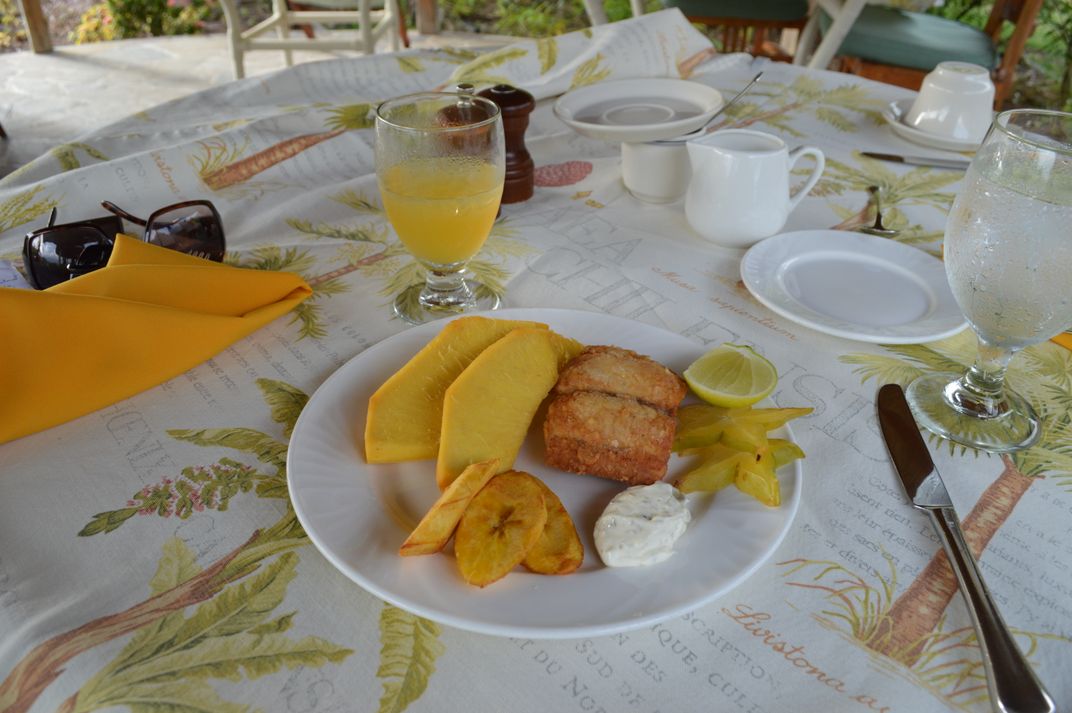 Breadfruit can be prepared many different ways, such as roasting, frying or steaming. Courtesy of Nyree Zerega / Northwestern University / Chicago Botanic Garden
While breadfruit is, as the name suggests, a fruit, it’s typically used in more savory applications—it’s even been nicknamed the “tree potato” because of its starchy consistency. Scientists believe breadfruit began growing in New Guinea, then spread throughout Oceania as voyagers traveled from island to island. In the late 1500s, Europeans encountered breadfruit for the first time and were “amazed and delighted by a tree that produced prolific, starchy fruits that, when roasted in a fire, resembled freshly baked bread in texture and aroma,” according to the National Tropical Botanical Garden’s (NTBG) Breadfruit Institute.
Report an ad
In the Pacific Islands, breadfruit trees provide shade for residents and wildlife; timber for canoes, homes and furniture; and latex for glue and caulk, per the NTBG. It has also played an important role in traditional medicine, treating ailments from skin diseases to dysentery. In addition to myriad fresh culinary preparations, it can also be dried and ground into flour.
Not only is breadfruit versatile, but it’s also full of nutrients, including magnesium, potassium, phosphorus, thiamine and niacin. And because it’s a perennial plant, breadfruit requires less labor, water and fertilizer compared to annual crops. As a tree, it also sequesters carbon dioxide.
These and other benefits make breadfruit a good candidate for tackling food insecurity, which is only expected to get worse as the global population balloons to nearly 10 million people by 2050, the researchers write. An estimated 720 to 811 million people around the world went hungry in 2020, per the United Nations, and many of them were living in areas with potential for growing more breadfruit, such as Africa, Asia, Latin America and the Caribbean.
"I really think it has a lot of potential to help people, especially in the tropics, where 80 percent of the world's hungry live," Diane Ragone, founder of the Breadfruit Institute, told Smithsonian magazine’s Amanda Fiegl in 2009. "It's low-labor and low-input; much easier to grow than things like rice and corn. And because it's a tree, the environmental benefits are huge compared to a field crop." 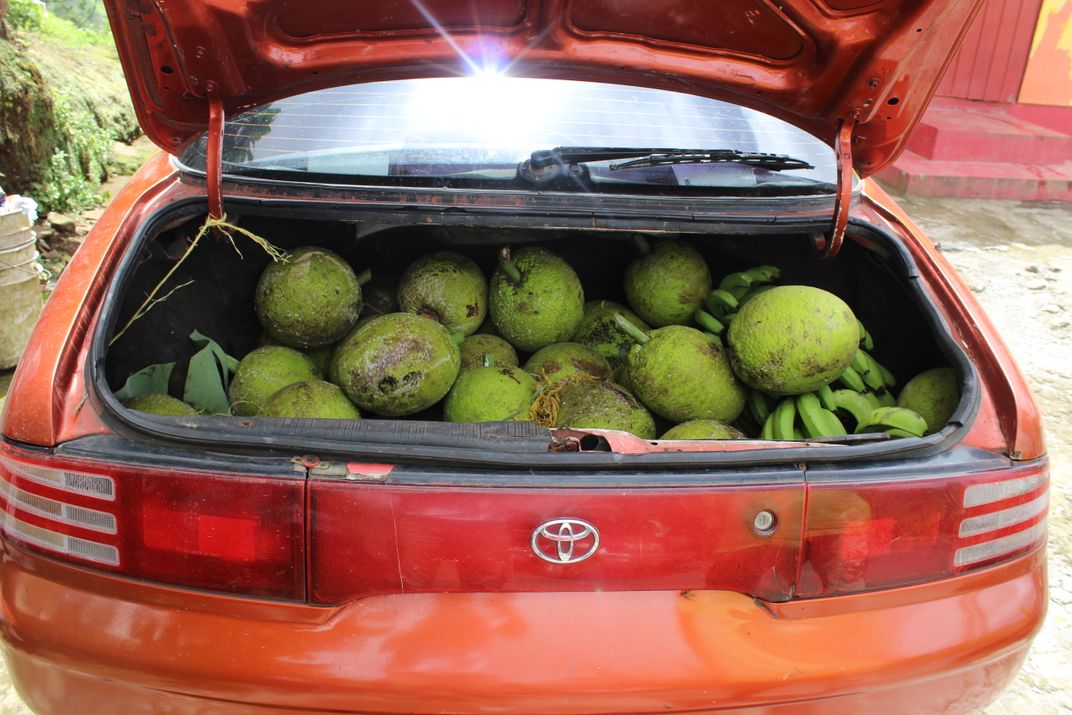 Scientists believe breadfruit originated in New Guinea. Courtesy of Nyree Zerega / Northwestern University / Chicago Botanic Garden
Despite its many upsides, breadfruit isn’t a cure-all. As Valerie Tuia, a former plant scientist for the Centre for Pacific Crops and Trees in Fiji, told NPR’s Liza Gross in 2016, “no crop is a silver bullet when it comes to food security and hunger,” including breadfruit.
But, when used in conjunction with other food security measures, scientists believe it does show great potential for helping to tackle hunger, even as the climate continues to evolve.
“Humans rely heavily on a handful of crops to provide most of our food, but there are thousands of potential food crops among the approximately 400,000 described plant species,” says Nyree Zerega, a study co-author and plant biologist at Northwestern and the Chicago Botanic Garden, in a statement. “Climate change further emphasizes the need to diversify agriculture, so the world doesn’t rely on a small number of crop species to feed a large number of people.”
Posted by arclein at 12:00 AM