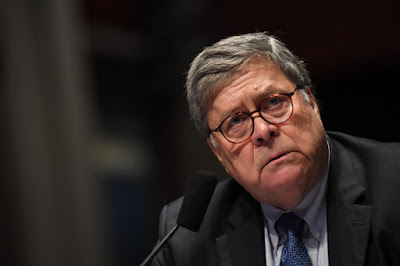 what comes out of this is the slow process involved to bring real justice.  We are all frustrated.  Under5stand that we all watched obvious sedition underway back in 2016.  Not just dirty tricks.

no one actually thought that justice could not be twarted, yet here we are.  Understand today aware citizens understand that their government is hijacked and that ladies is really the majority by far.  So the ongoing process of Durham needed real protection.
Behind all this, which is a public process, a WAR is underway detected only by the silence.   so good to hear from Barr and his comments on the durham investigation.
Former Attorney General Bill Barr Says Clinton Guilty Of ‘Sedition’
June 9, 2022
OPINION: This article may contain commentary which reflects the author's opinion.
https://conservativebrief.com/sedition-63202/?
Former United States Attorney General Bill Barr has given a stark warning to former Democrat presidential nominee Hillary Clinton over her “seditious” conspiracy against former President Donald Trump.
“I thought we were heading into a constitutional crisis. I think whatever you think of Trump, the fact is that the whole Russiagate thing was a grave injustice. It appears to be a dirty political trick that was used first to hobble him and then potentially to drive him from office,” he said on Glenn Beck’s Blaze TV podcast.
“I believe it is seditious,” he said, but he warned that those charges would be tough to prove in a court.
“It was a gross injustice, and it hurt the United States in many ways, including what we’re seeing in Ukraine these days. It distorted our foreign policy, and so forth,” the former attorney general said.
He said that he named Special Counsel John Durham to lead the case in private so it would stop President Joe Biden and Attorney general Merrick Garland from interfering with him.
“I was highly confident he would remain in office and they wouldn’t touch him,” he said.
“The Biden administration had no real interest in protecting either Hillary Clinton or Comey,” he argued.
“And at the end of the day, for them to lose the capital and appear to be covering something up that would then never get resolved, I didn’t think was in their interest,” he said.
“And I think institutionally that would’ve destroyed the new AG if he had tried that.
“If you don’t have the threat of a grand jury, no one will come in and talk to you. You’ll say, the usual thing is, ‘Please come in for a voluntary interview,” the former attorney general said.
“And people come in because they know if they don’t, they’re subpoenaed.
“But if there is no grand jury, they say, ‘No, I’m not coming in,’ and there’s nothing you can do,” he said.
“And people don’t understand that that state of affairs lasted until the month before the election,” he said of the pandemic that delayed the Durham probe.
“So his hands were very much tied as to how far he could push things and how much pressure he could bring on people through most of 2020,” he said.
Special Counsel John Durham’s investigation into the origins of the Trump-Russia witch hunt has been heating up for months, with many wanting Hillary Clinton and her allies held accountable.
Former Attorney General Barr, who served under President Donald Trump, believes Durham has made progress in his investigation and that more damning information may come out soon.
Barr said that Durham has “dug very deep” into the origins of the FBI’s investigation into disproven claims that then-candidate Trump was colluding with Russia to interfere with the 2016 election and has uncovered “good information.”
“I think the question all along … has been that this was a campaign-dirty-trick to get the government to investigate allegations — scurrilous allegations — about Donald Trump and then leak that right before the election,” Barr said.
“And so that raises two questions: Was the Clinton campaign developing this false information and feeding it in for that purpose? And what was the FBI’s role on this?”
“It tells me that he [has] dug very deep and he has developed some good information and he thinks he can make a criminal case here,” Barr said.
The federal judge overseeing Durham’s case against former Clinton campaign lawyer Michael Sussmann said on Thursday that he was “not inclined” to declare a mistrial.
Sussmann’s lawyers said they were considering moving for a mistrial in the first trial from Durham.
Last week, the judge gave Durham another victory in the trial.
Judge Cooper ruled that GPS Fusion, the research firm Clinton’s 2016 campaign hired to dig up dirt on Trump’s alleged ties to Russia, must turn over nearly two dozen emails to Durham’s team.
“Those emails – which are largely exchanges between Clinton campaign lawyer Michael Sussman and Fusion GPS – are part of a batch that prosecutors subpoenaed last year. U.S. District Judge Christopher Cooper blocked prosecutors from getting 16 of those emails but allowed Durham to obtain 22,” Fox News reported.
“Cooper ruled that the 16 emails in question were protected by attorney-client privilege and attorney-work-product while the remaining 22 were not. Still, the judge ruled that those emails will not be admissible in the impending trial of Sussman – who is charged with lying to the FBI during a September 2016 meeting – because of the untimeliness of Durham’s request,” the report added.
Durham indicted Sussmann — a prominent lawyer who worked for the Democratic National Committee and Hillary Clinton’s 2016 presidential campaign — for allegedly lying to FBI lawyer James Baker during a 2016 meeting about who he was representing when he gave information about Donald Trump and Russia to the bureau.
Posted by arclein at 12:00 AM