Webb Space Telescope Snaps Its First Photo of an Exoplanet 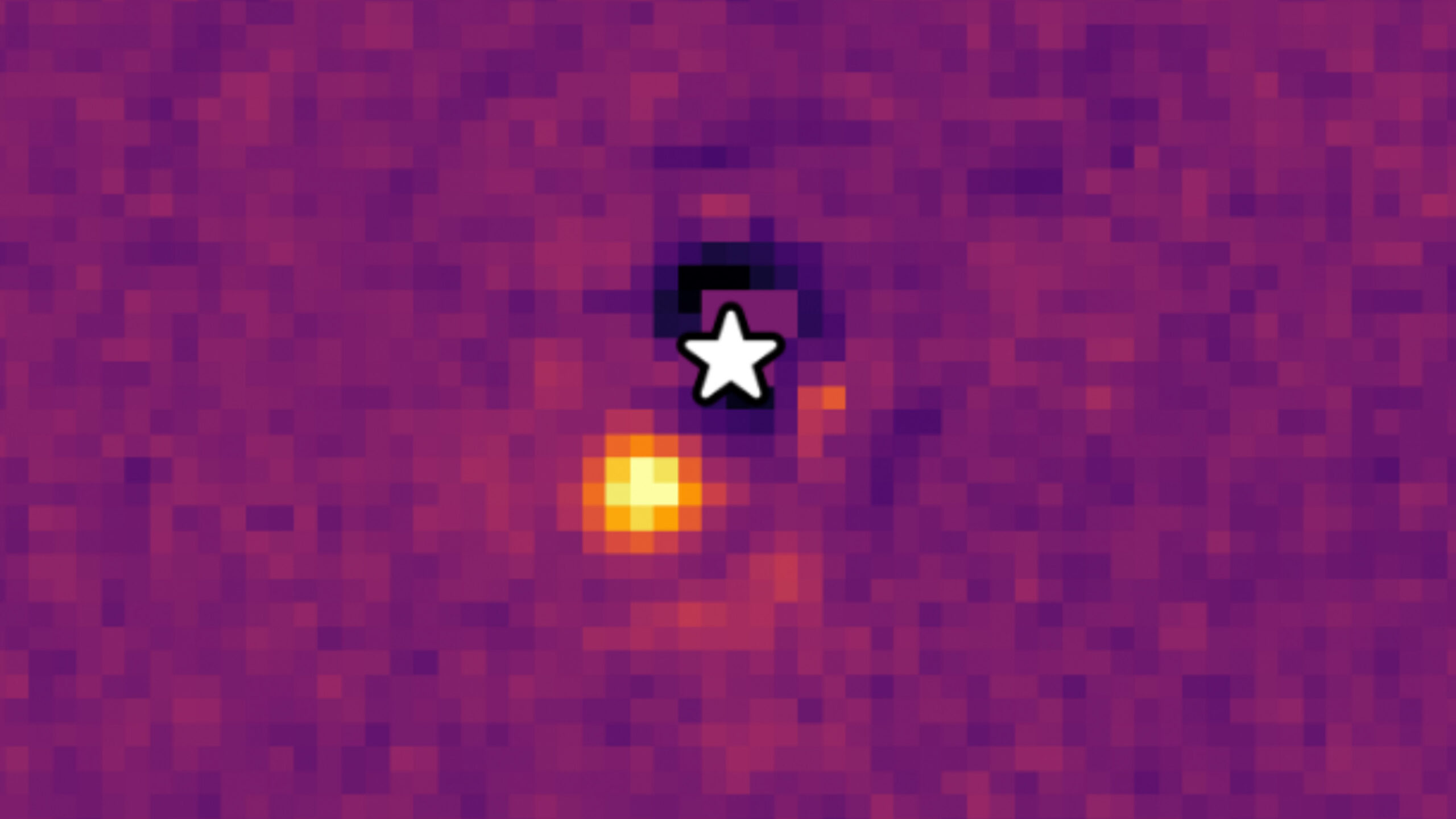 The detail is becoming steadily more robust.  We have a lot of rocky planets in the inner planet zone of these stars and we are seeing Jupiters as well.  All that is expected
now we need to see if any of those rocks are large enough to have a decent atmosphere.
what we can expect is a stable number of large Gas giants reacting with the star along with a collection of rocky planets inside the binary gravitaional zone and that these will sort out into stable simple orbits such as our inner solar system shows.
This should be common with close in giants been abnormal.
Webb Space Telescope Snaps Its First Photo of an Exoplanet
The grainy image of a “super-Jupiter” is a sign of what’s to come as the telescope’s exoplanet observations ramp up.
Behold the bright blob of planet HIP 65426 b, located nearly 400 light-years away. The star symbol overlays the location of the masked-out star that the planet orbits.
Aarynn Carter (UCSC), the ERS 1386 team
Jonathan O'Callaghan

Contributing Writer
September 1, 2022
Abstractions blogastronomyastrophysicsexoplanetsphysicsplanetary scienceAll topics
Astronomers have revealed the first photograph of an exoplanet taken by NASA’s James Webb Space Telescope (JWST). The image shows the bright blob of a world seven times heavier than Jupiter that orbits a star nearly 400 light-years away. The groundbreaking result is the latest in a slew of early exoplanet findings from the telescope, and a test of technologies that will enable direct imaging of Earth-like planets by future space telescopes.
“It’s exhilarating,” said Aarynn Carter, an astronomer at the University of California, Santa Cruz, and part of the team that processed the image. “The result is, honestly, excellent.”
JWST, a telescope decades in the making that launched in December 2021 and now floats a million miles from Earth, became fully operational this summer. Already, it has observed distant galaxies at the dawn of the universe and taken exquisite views of Jupiter, among other early results. Astronomers say the telescope is also performing 10 times better than expected at observing exoplanets.
The new image, described in an accompanying paper posted online last night, comes from a team led by the astrophysicist Sasha Hinkley at the University of Exeter in the United Kingdom. The researchers pointed JWST at the fast-spinning star HIP 65426, where a planet was already known to exist; the SPHERE instrument on the Very Large Telescope in Chile first photographed the planet in 2017. Hinkley’s team sought to test and characterize JWST’s ability to see the planet, called HIP 65426 b.
Astronomers have directly imaged about two dozen exoplanets, but JWST will greatly expand the capability by wielding its 6.5-meter-wide hexagonal mirror, outclassing any ground-based observatory. “It is a moment of promise,” said Bruce Macintosh, an astrophysicist and the incoming director of the University of California Observatories.
Hot Young Giant
To photograph HIP 65426 b, JWST blocked the light of its host star using a small mask known as a coronagraph. This revealed the orbiting planet, which is thousands of times fainter, like “a firefly around a searchlight,” said Hinkley.
HIP 65426 b orbits about 100 times farther from its star than Earth does the sun, taking 630 years to complete an orbit. This distance means it’s easier to see the planet against the glare of the star; that, coupled with the planet’s extreme heat and thus brightness — it has a scorching temperature of about 900 degrees Celsius, a fever left over from its formation just 14 million years ago — makes it a prime target for direct imaging. “It has a temperature similar to a candle flame,” said Beth Biller, an astronomer at the University of Edinburgh who co-led the team. 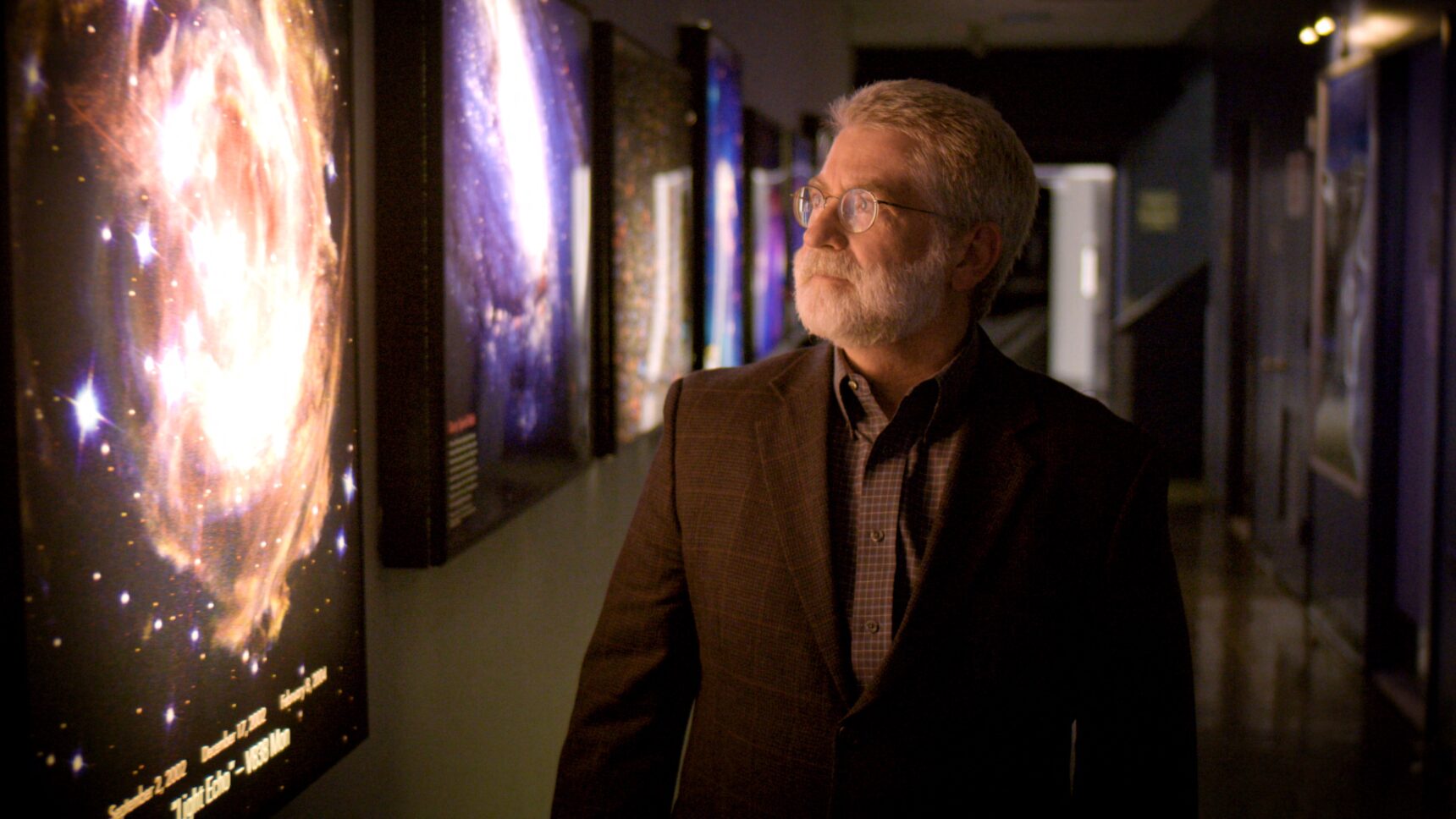 Video: The James Webb Space Telescope is like nothing ever launched into space. It could explore the universe’s very first stars, uncover evidence of extraterrestrial life — or literally hit a snag and become worthless.
Emily Buder/Quanta Magazine
JWST’s size and sensitivity enabled it to collect more light from this planet than any previous observatory has obtained. (Its photo looks grainier than SPHERE’s only because JWST observes longer, infrared wavelengths.) This allowed Hinkley, Biller and their team to refine the estimate of the planet’s mass, which they peg at about seven Jupiter masses, less than SPHERE’s estimate of about 10. Their results also help nail down the planet’s radius, which is 1.4 times that of Jupiter. Simple models of planetary evolution can’t easily explain this world’s combination of properties; Carter noted that the precise new data will allow scientists to test models against each other and “tighten our understanding.”
HIP 65426 b’s surface features aren’t visible in the image, but Biller said it would “probably look banded” like Jupiter, with belts caused by variations in temperature and composition, and might have spots in its atmosphere caused by storms or vortices.
The giant planet is inhospitable to life as we know it, but it represents a class of large planets that scientists are eager to learn more about. Jupiter probably played a key role in sculpting our solar system, perhaps enabling life on Earth to take hold. “It’d be nice to know if that works in other solar systems,” said Macintosh. 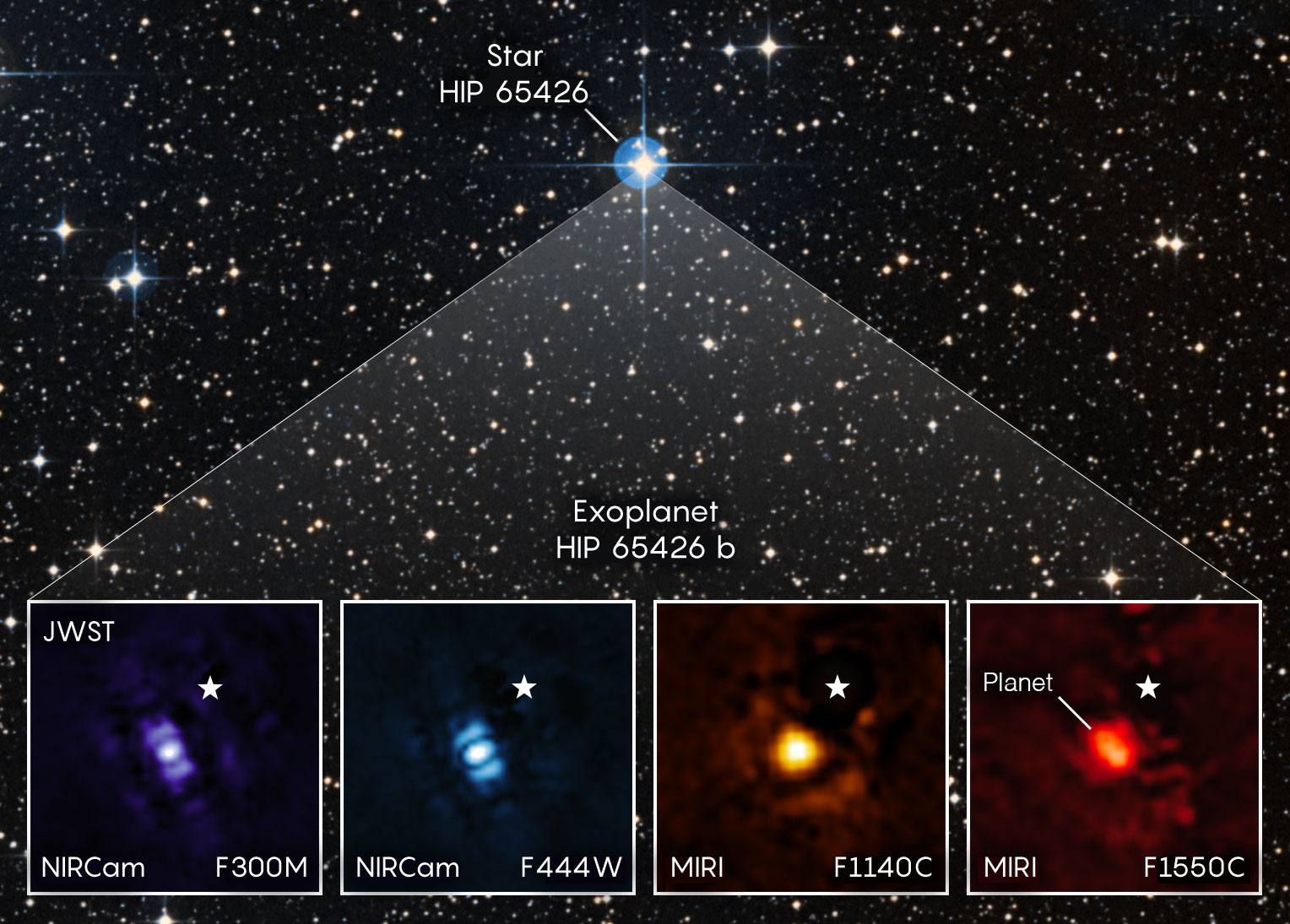 The Webb telescope’s Near Infrared Camera (NIRCam) and Mid-Infrared Instrument (MIRI) each captured views of the planet HIP 65426 b at multiple infrared wavelengths, providing details that astronomers could use to infer the planet’s properties. The white stars mark the location of the host star HIP 65426, which has been subtracted using coronagraphs and image processing, while the bar shapes in the two NIRCam images are artifacts of the optics, not objects in the scene.
NASA/ESA/CSA, A Carter (UCSC), the ERS 1386 team, and A. Pagan (STScI)
Because JWST is so much more stable than expected, scientists say it should be able to photograph smaller exoplanets than anticipated — perhaps as small as a third of Jupiter’s mass. “We could image things like Neptune and Uranus that we’ve never directly imaged before,” said Emily Rickman, an astronomer at the Space Telescope Science Institute in Maryland, which operates JWST.
Now that JWST’s coronagraph has passed its road test, Hinkley thinks astronomers will be lining up to use it to take otherworldly photos. He expects to see “definitely dozens” by the end of the telescope’s lifetime. “I hope it’s more like hundreds.”
Peeking in Distant Skies
In addition to the exoplanet photo, Hinkley’s team will announce in the coming days that they have discovered an array of molecules in the atmosphere of a suspected brown dwarf — sometimes known as a “failed star” — orbiting a companion star. Almost 20 times heavier than Jupiter, the object has a mass just below the threshold where fusion could begin in its core.
Using an instrument on JWST that picks apart the light’s frequencies, a process called spectroscopy, the scientists found water, methane, carbon dioxide and sodium, all revealed at an unprecedented level of detail. They also detected smokelike clouds of silica in the candidate brown dwarf’s atmosphere, something hinted at before in such objects but never established. “In my mind this is the greatest spectrum ever obtained of a substellar companion,” said Hinkley. “We’ve never seen anything like it.”

Samuel Velasco/Quanta Magazine
The discovery follows hot on an announcement from last week, when a different team of astronomers reported that they have used JWST to detect carbon dioxide in a giant exoplanet called WASP-39 b located 650 light-years from Earth — the first time the gas has ever been seen in an exoplanet. They also spotted a mystery molecule in the atmosphere. That same team is also studying two more giant worlds, with results expected in the coming months that will help piece together an almost complete picture of the atmospheric composition of gas giants like these. “That’s the power of James Webb,” said Jacob Bean, an astronomer at the University of Chicago and the team’s co-leader.
The observations will also build up a “chemical inventory” that will show what JWST might detect in the skies of smaller rocky worlds more similar to Earth, said team leader Natalie Batalha, an astrophysicist at Santa Cruz. She said the team plans to “push JWST to its limits” in their upcoming gas giant observations, which will “tell us what we can do on terrestrial planets.”
Other teams are conducting the first JWST observations of TRAPPIST-1, a relatively nearby red dwarf star orbited by seven Earth-size rocky worlds. Several of these planets are in the star’s habitable zone, where conditions favoring liquid water and even life may be possible. While JWST cannot directly image the planets, spectroscopy will help identify the gases in their atmospheres — possibly even hints of gases that could signify biological activity. “What we really want is Earths,” said Macintosh.
Posted by arclein at 12:00 AM