Did the COVID Unvaccinated Fare Better or Worse Than the Vaccinated? The Results Are In 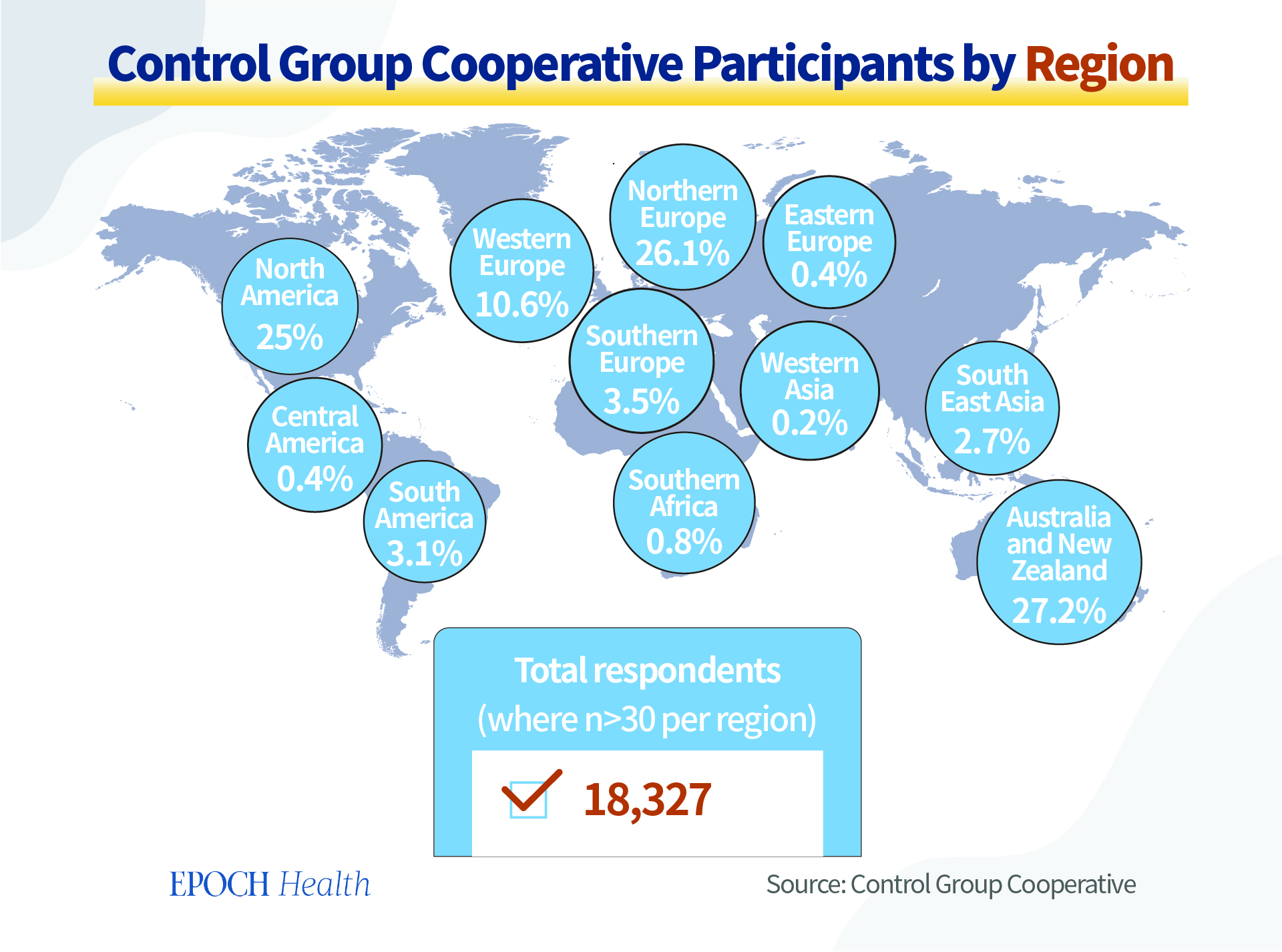 In the cohort, the largest unvaccinated populations are from Europe (40 percent), Oceania (Australia and New Zealand; 27 percent), and North America (United States and Canada; 25 percent). The respondents are from a total of 68 countries and six continents.
Age Group and Gender 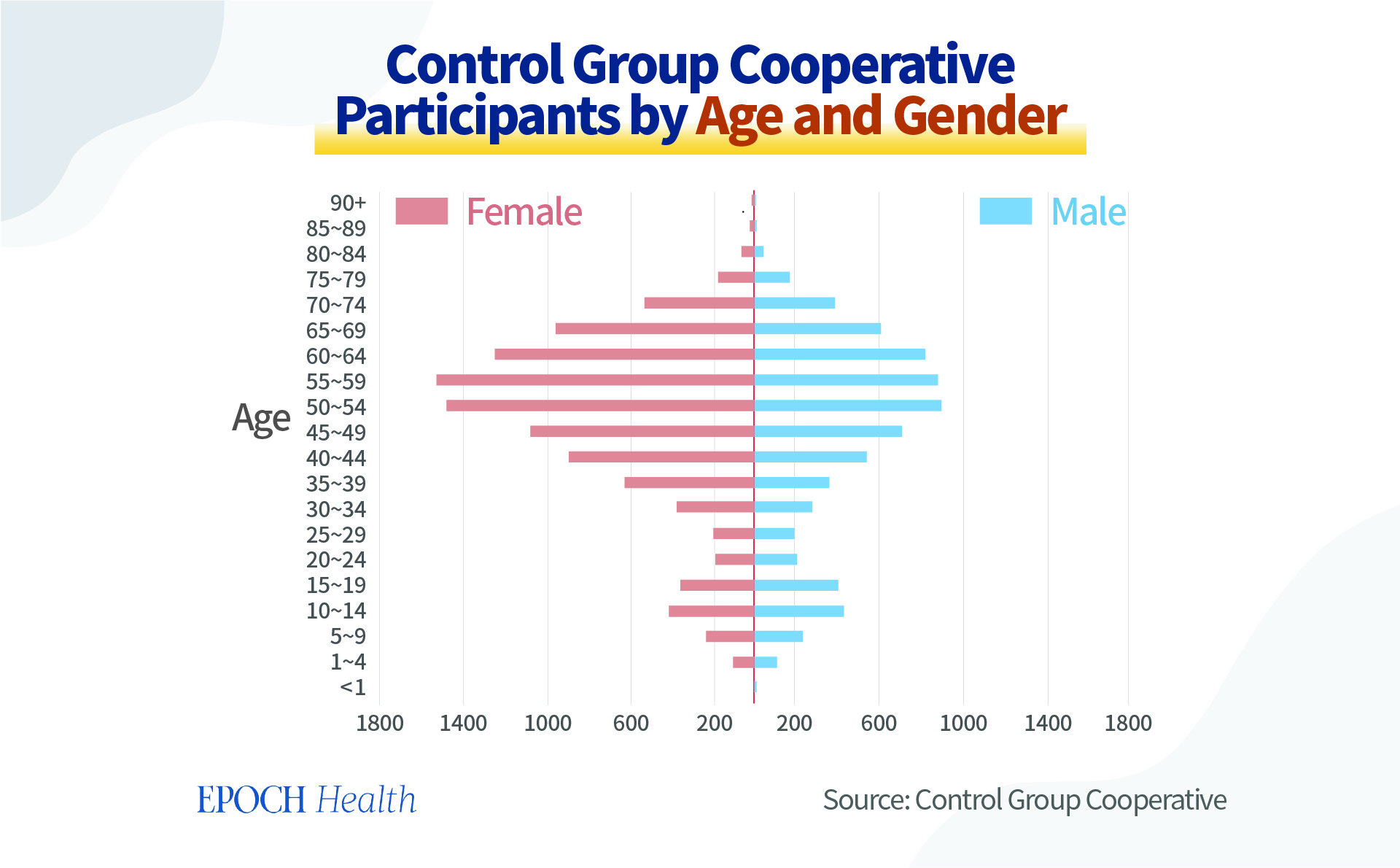 Among the 96.3 percent of the survey participants who disclosed their gender, 57 percent were female, and 43 percent were male. The largest numbers of respondents were found in the 50 to 69 age group, who are considered by the health authorities as at a higher risk of COVID-19 infection and severe illness/death after infection than the general public. The number of participants between the ages of 40 and 49 was also relatively large.
Top Reasons for Not Receiving COVID-19 Vaccines 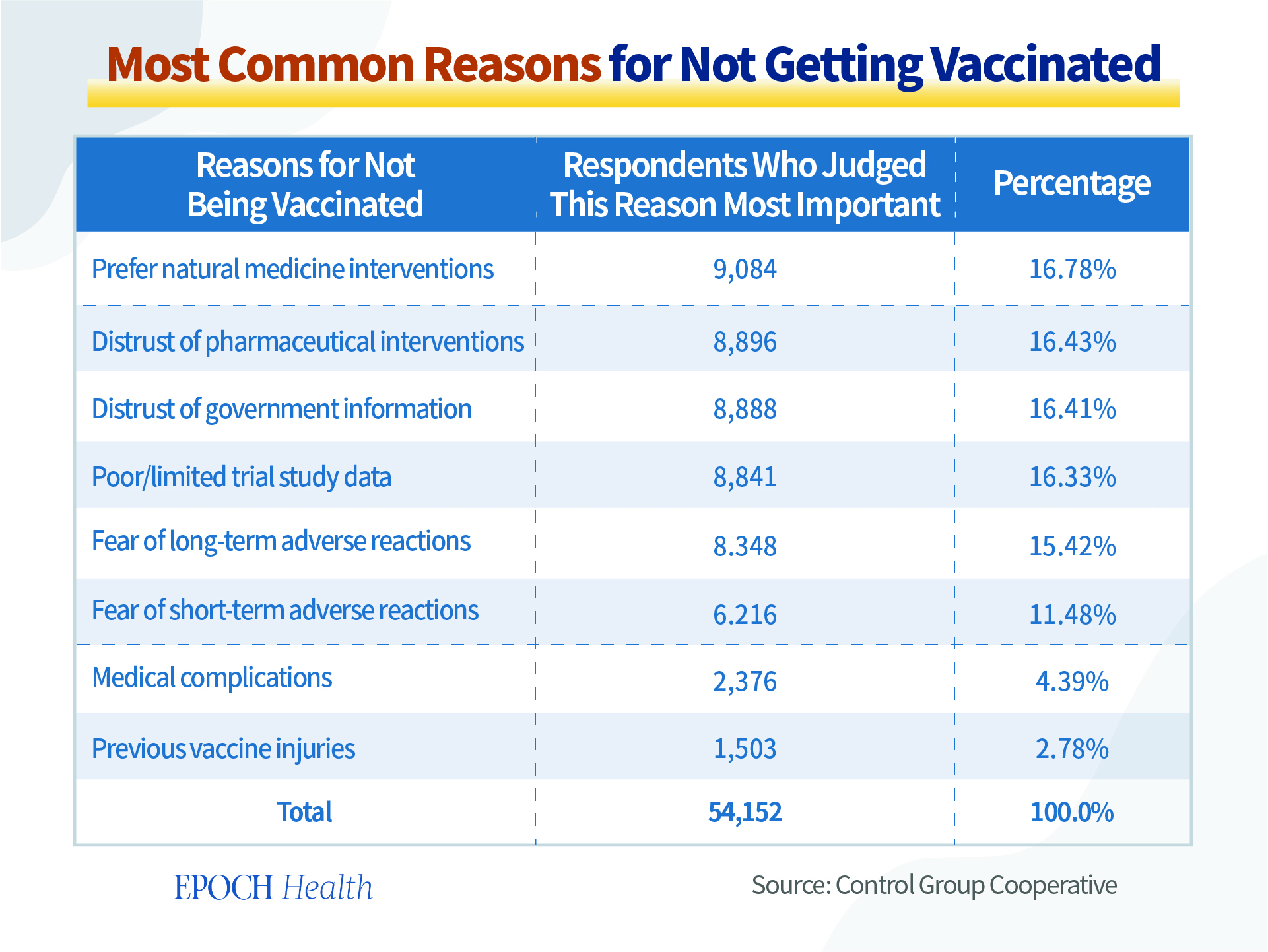 According to the survey, the five leading reasons behind the cohort’s decision to not receive COVID-19 vaccines include preference for natural medicine interventions, distrust of pharmaceutical interventions, distrust of government information on the vaccines, poor or limited trial study data, and fear of long-term side effects. They were of nearly equal importance. Each respondent could select more than one reason that he/she considered equally important.
From the results, we can see that the participants were not refusing medical treatment, nor were they not caring of their own health, as sometimes portrayed by the media and/or authorities. To these unvaccinated people, they just did not think that there is only one way (the vaccine way) to help them medically, and they have been reasonably conservative in taking new vaccine products. No scientist in the world can claim that we understand every aspect of the new vaccine products.
Furthermore, since vaccine development in the past took 10 to 15 years on average to complete, many people are skeptical of the COVID-19 vaccines, which were invented so quickly by several major pharmaceutical companies (Pfizer, Moderna, Johnson & Johnson) after receiving hefty funding from the U.S., German, and other governments. Moreover, the messenger RNA (mRNA) platform, based on which the Pfizer and Moderna COVID-19 vaccines were invented, is a new technology, which hadn’t been used to produce vaccines previously.
Even before the vaccines were implemented, people knew that RNA molecules were unstable in the human body. However, the mRNA generated in the new vaccines have been modified to keep them more stable. Therefore, we don’t know whether any side effects from these modified mRNA molecules would be immediate, delayed, transient, or long term. Therefore, it’s reasonable for some people to want to wait and see the long-term effects of these new mRNA vaccines and to not trust their limited trial data.
Physical and Mental Health Status of the Unvaccinated Cohort
1) COVID-19 infection before survey 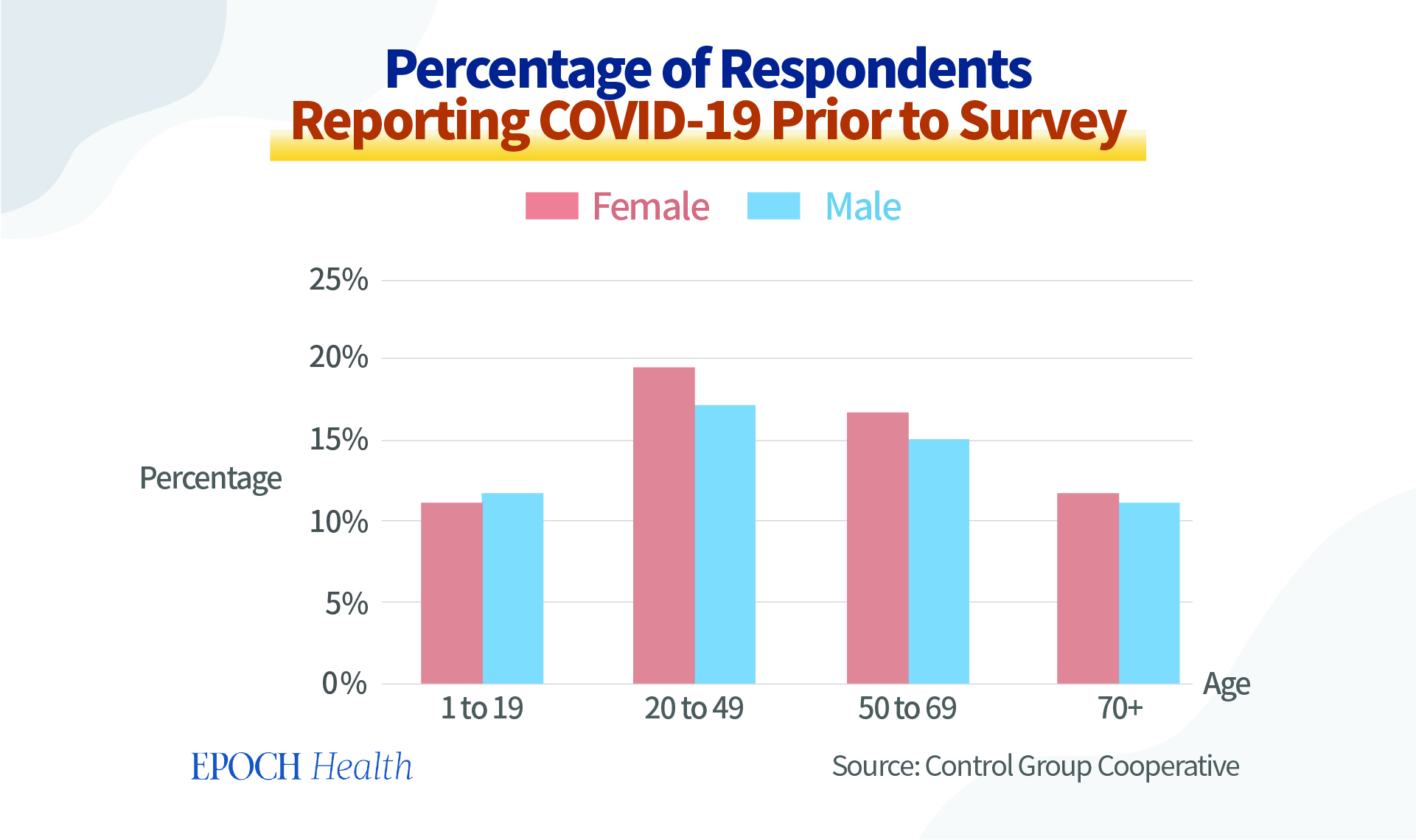 Prior to taking the survey, less than 20 percent of the participants had been infected by the SARS-CoV-2 virus, with the majority of the people aging from 20 to 69 years old.
2) COVID-19 infection during five month period 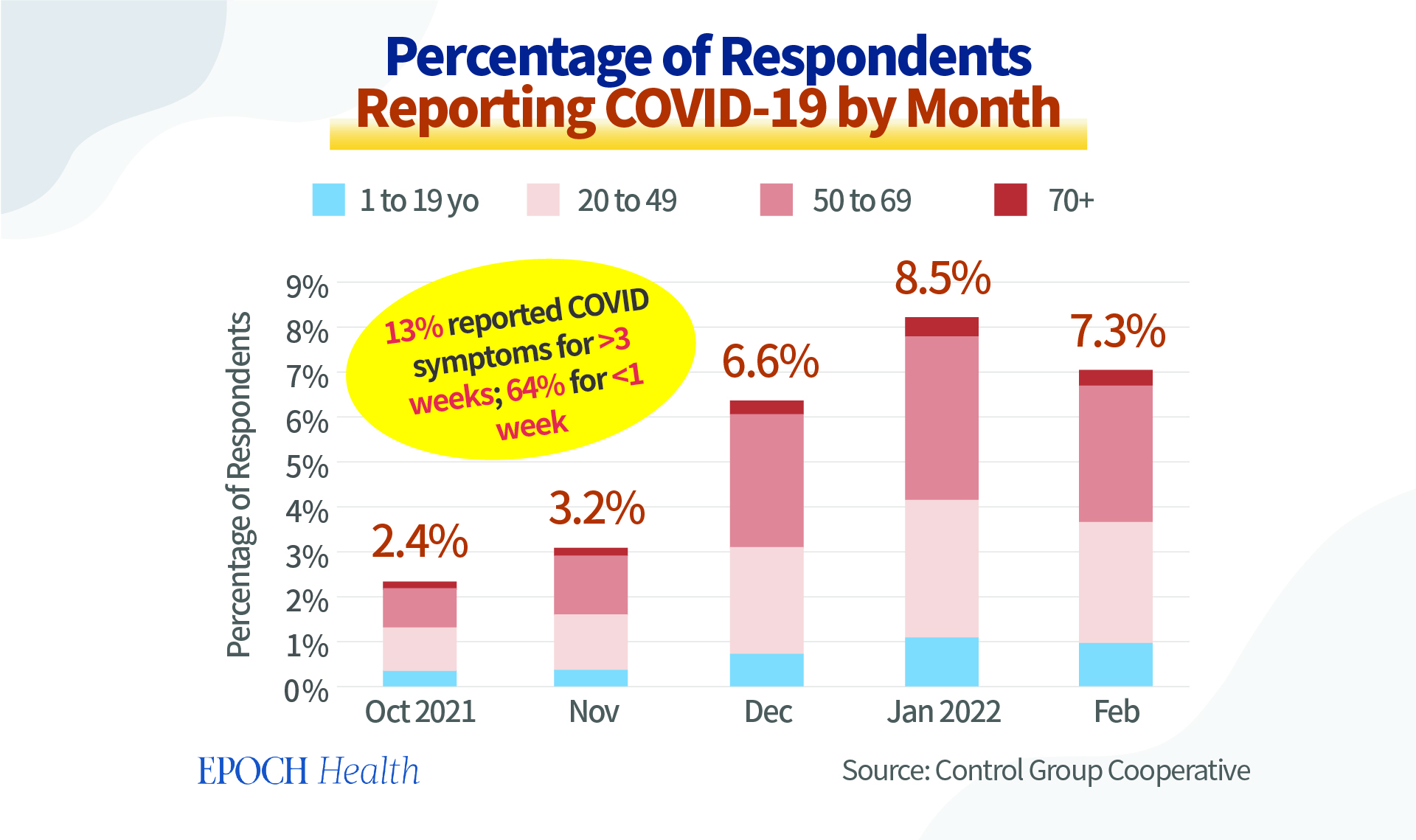 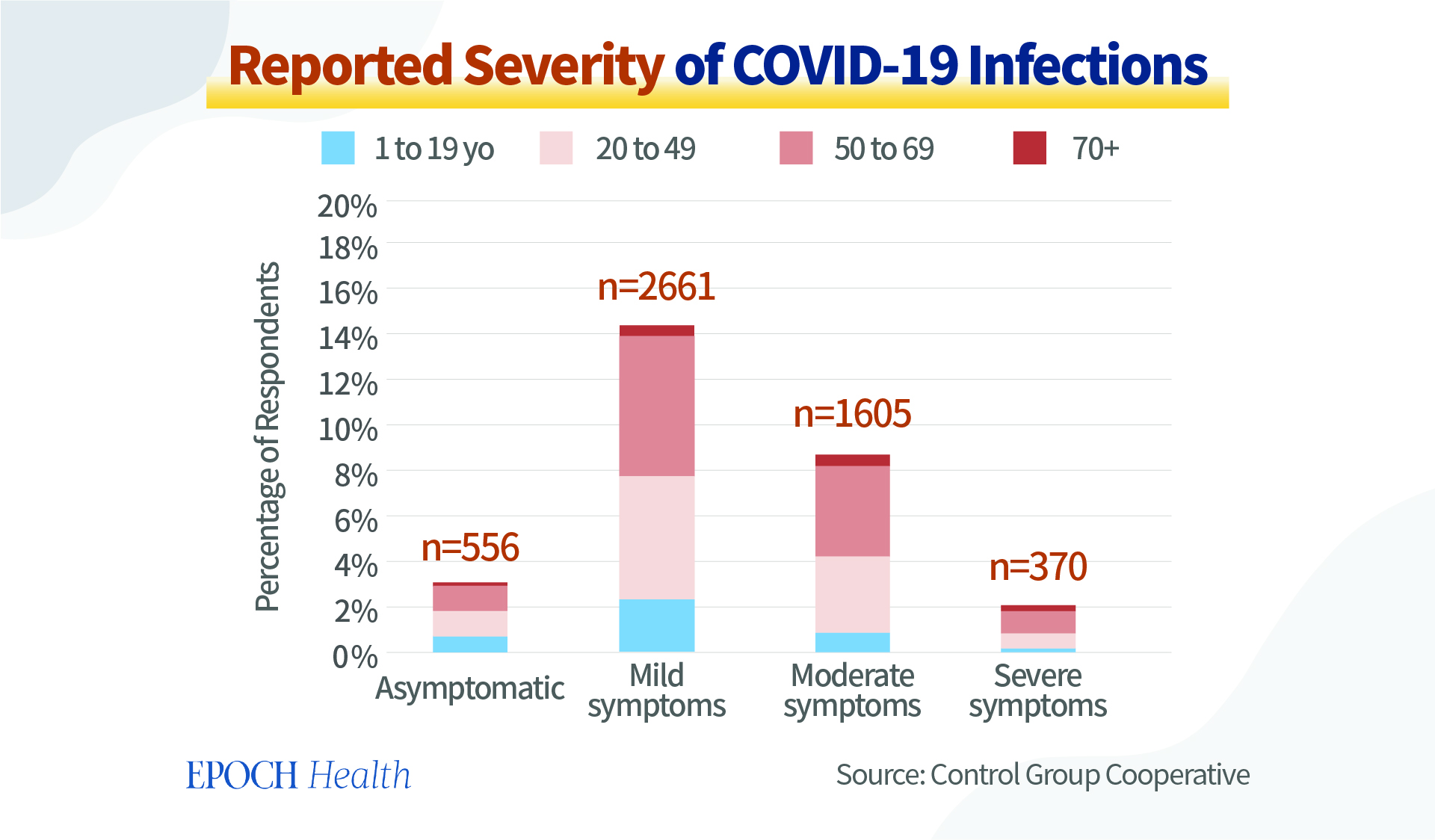 Given that society had found no way to stop the spread of the Omicron variant, many were infected during this time period—this included many asymptomatic infections. Therefore, our main concern is with the respondents of the cohort who were seriously ill and/or hospitalized.
Fortunately, in the vast majority of the cases, the patients’ symptoms were mild and moderate. The rate of severe illness appeared to be very low (around 2 percent of all respondents). Only 74 individuals among the 5,196 (1.4 percent) confirmed or suspected infected respondents reported that they were hospitalized. This percentage might not be very accurate, as people who are very sick or hospitalized might not be healthy enough or willing to participate in this kind of survey. So, objectively, this kind of survey will have data skewing towards more healthy targets.
Nevertheless, the data here still indicates that this group of unvaccinated people were not more prone to the infection by Omicron, even though they were not protected by the vaccines. Otherwise, the percentage of infection and hospitalization rates among this group of people would be much higher. Therefore, this is a very important piece of data, as well as the core observation in this study.
However, in the above graph, there are no data on the number of deaths, as the deceased wouldn’t be able to self-report their cases. Since it’s simply impossible to know the number of deaths with the survey design, some may criticize the findings as not authoritative, because these cases were not confirmed by doctors. Nevertheless, judging from the small portion of patients with severe illness among the infected cohorts in this group, it is fair to estimate that disease progression upon Omicron infection does not correlate with the vaccination status.
Also, among the infected respondents, the leading symptoms include fatigue, cough, muscle or body aches, fever, and loss of taste, with most of them being reported by participants in the 50 to 69 years old age group. Most likely, age and underlying medical conditions would be the main factors leading to disease progression.
Self-administration of Vitamins and Medicines 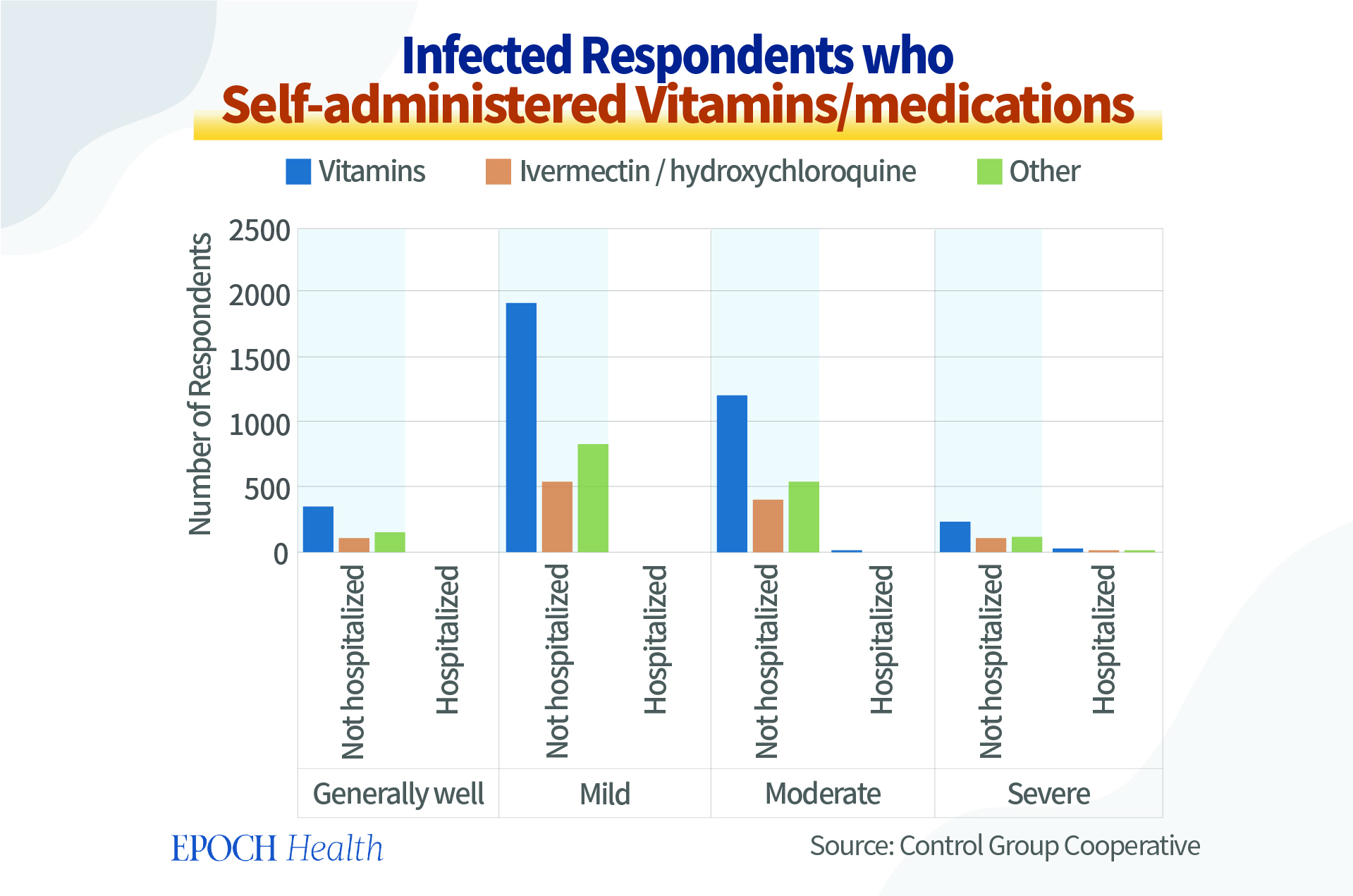 Although the Food and Drug Administration (FDA) and health authorities in some other countries haven’t approved the use of ivermectin or hydroxychloroquine, some respondents believed that there were significant volume of medical study data to suggest that these drugs were effective at treating COVID-19 disease, and some clinicians said that from their own experience that they had helped many of their patients with these drugs. As a result, some did use these drugs to combat their COVID-19 infection. Also, most people took vitamins, as they can be very helpful in boosting the immune system. So it is clear that they had been taking an active approach to prevention and treatment, not simply ignoring the threats of COVID.
Mask-wearing Situation of Infected Respondents 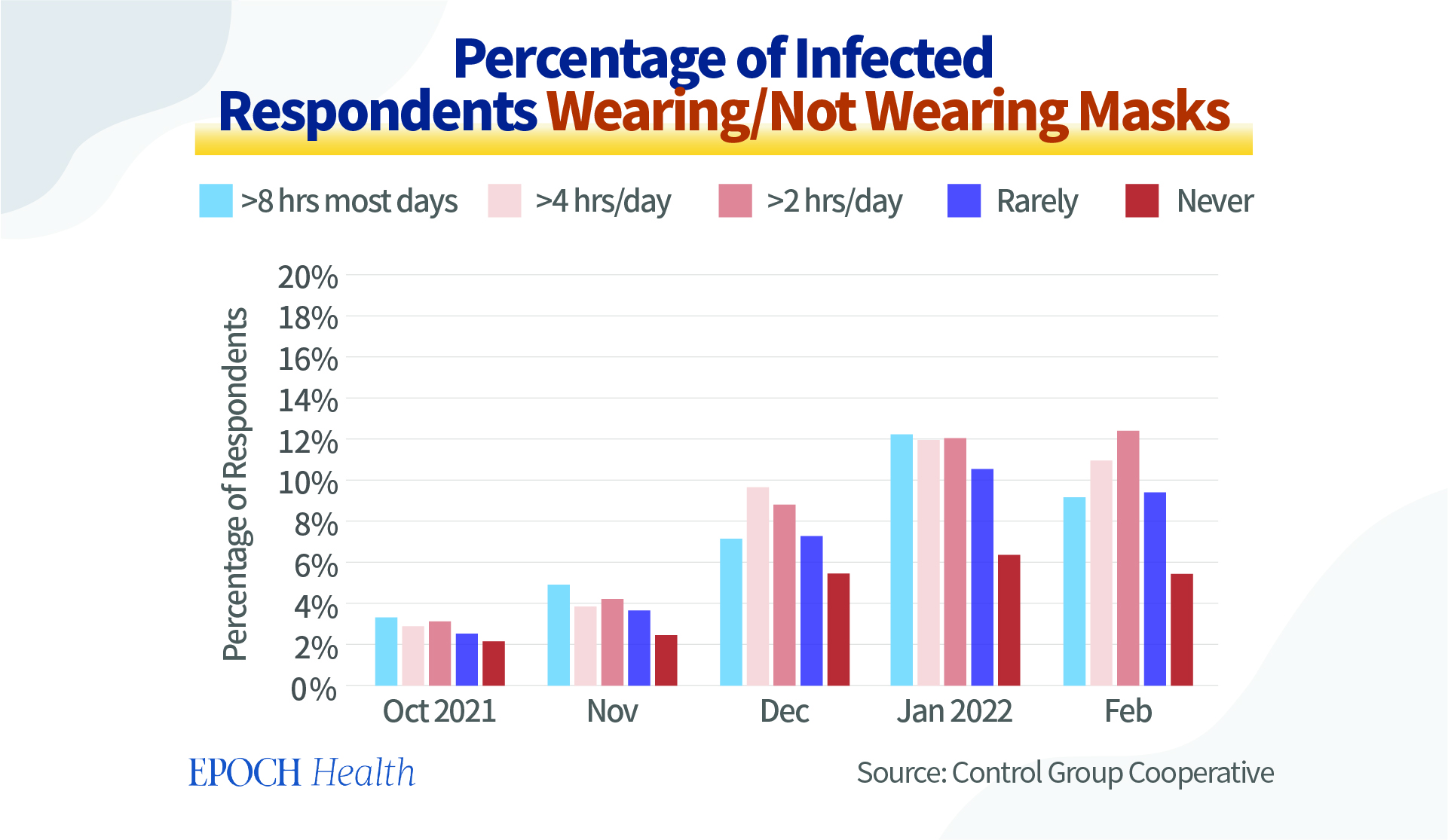 The fact that these participants were not vaccinated doesn’t imply that they were not concerned about their own health or others’ health. In reality, many of them were very conscious of their health and personal hygiene practices to stop the spread of COVID-19.
Many people stereotype the unvaccinated people as a group who doesn’t care about their lives or health, as they do not wear masks nor take any precautions to avoid infecting others. However, the data on the graph clearly showed that many of these unvaccinated people also wore masks for long periods in a day. And the data here do not imply any causal relationship between mask wearing and COVID-19 incidence.
Discrimination Faced by Unvaccinated Control Group
Some media personnel, authority figures, and government agencies have asserted that the unvaccinated pose a risk to the vaccinated individuals. In November 2021, Professor Gunter Kampf explained in his article published in The Lancet that even vaccinated individuals would continue to spread the SARS-CoV-2 virus. Therefore, the stigmatization of the unvaccinated people cannot be justified scientifically.
However, several countries had imposed a COVID-19 vaccine mandate on their adult populations. Many other countries, such as the U.S., Canada, and France, require federal workers, healthcare workers, and/or employees of certain professions to receive COVID-19 vaccines. The ones who still declined to get jabbed would lose their jobs. 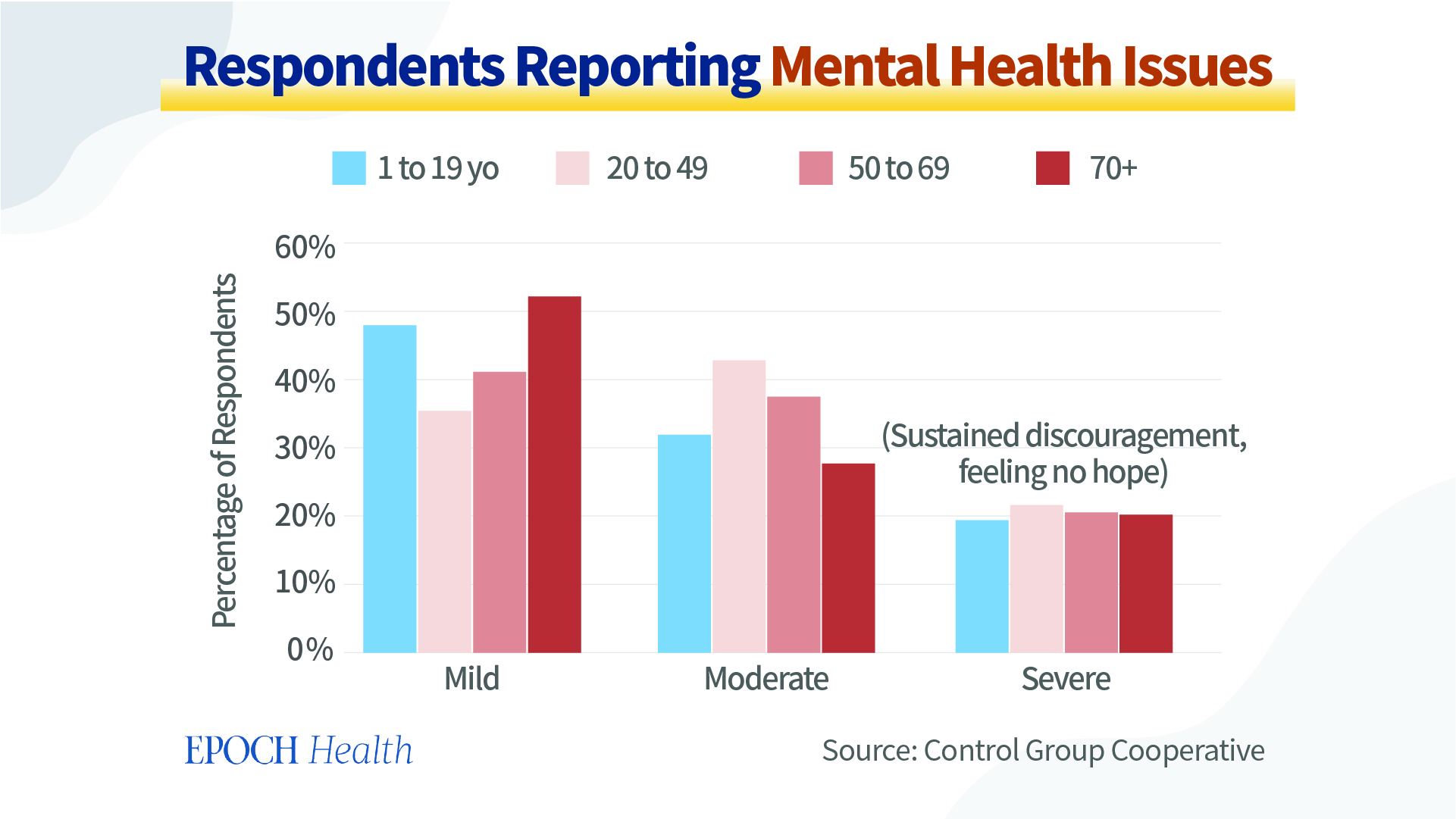 The survey also asked the respondents to indicate whether or not they felt discriminated against by their authorities or other people. Between 20 and almost 50 percent of respondents reported being victimized. The regions with the highest rates of reported discrimination were Southern Europe, South America, Western Europe, Oceania, and Southern Africa. These participants have been discriminated against by policy or by other people in all aspects of life, including work, study, and travel.
Job Losses for Participants of Working Age
For the purpose of the survey, people aged 20 to 69 years old were considered of the working age. The highest rates of job losses were reported in Oceania (29 percent of working-age respondents), North America (13 percent), Southern Europe (13 percent), and Southeast Asia (12 percent). Although the report didn’t indicate whether the job losses could be entirely attributed to the vaccine mandates, it’s quite possible that some people would lose jobs due to their refusal to receive the COVID-19 vaccines. 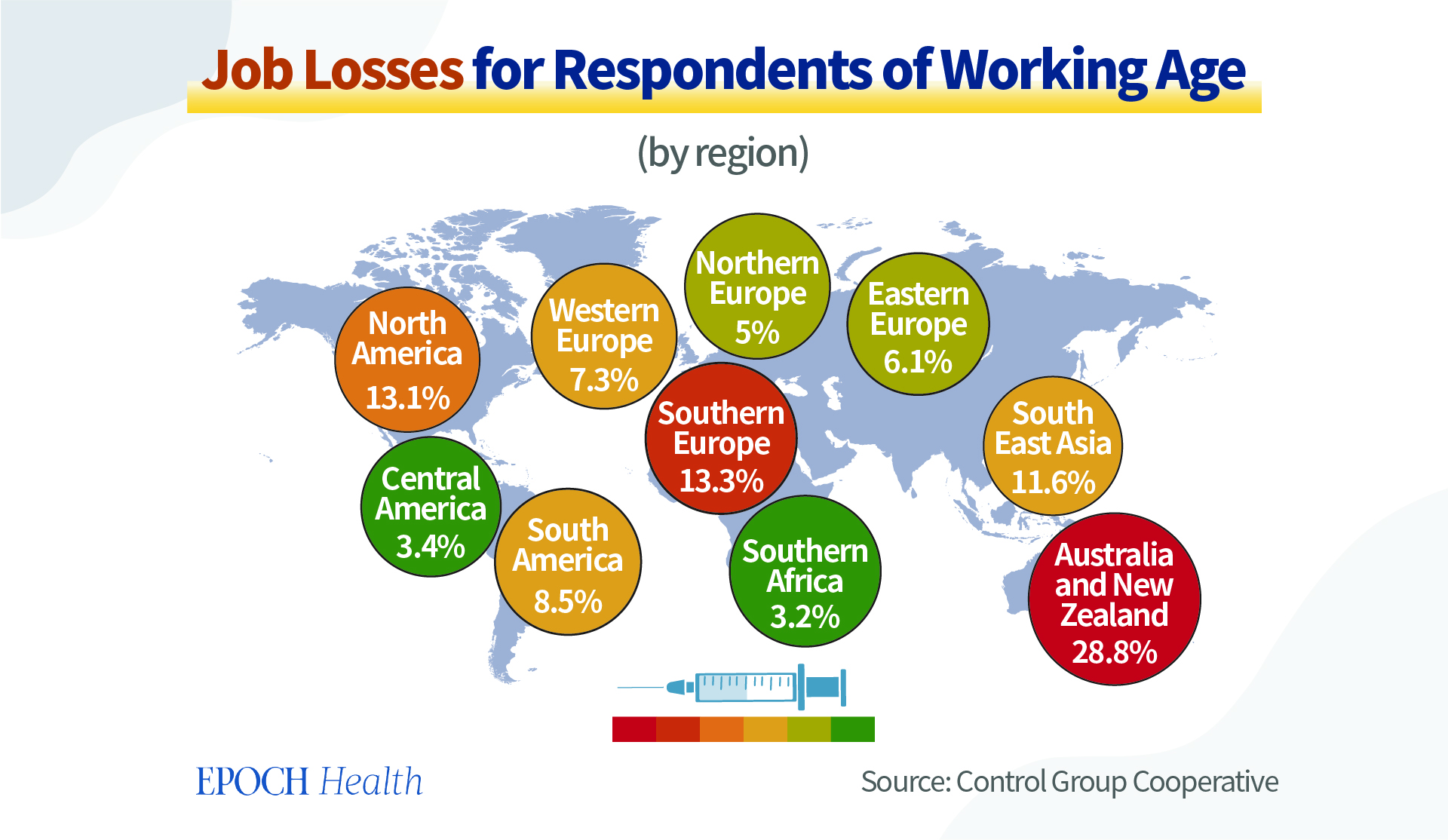 Mental Health Status of the Unvaccinated Cohort
Also, although the majority of the unvaccinated respondents didn’t suffer from infection/severe illness, would the stress from vaccine mandates/requirements hurt them psychologically? 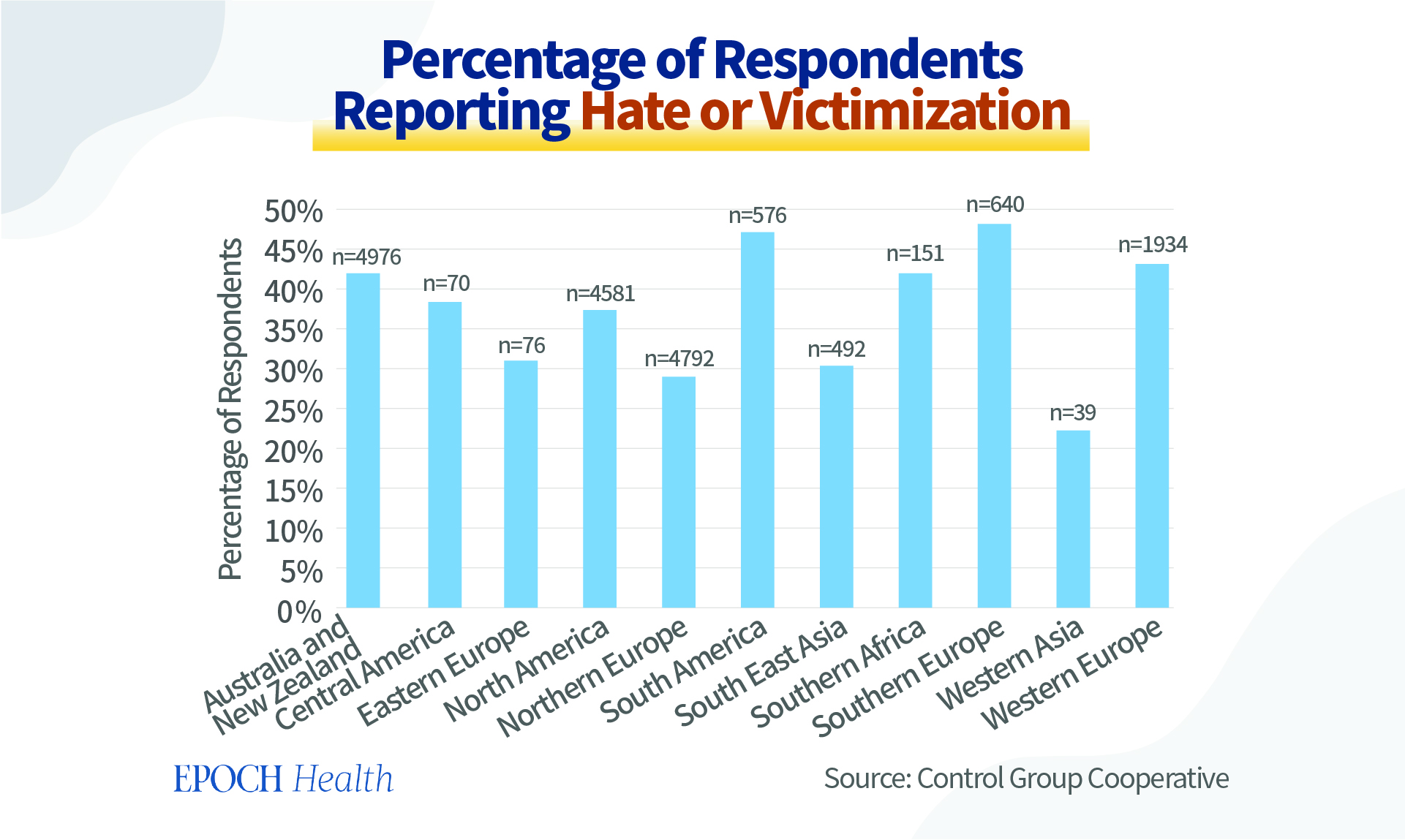 Their mental health status was self-assessed. Only 12 percent of the participants believed “life is great” during the 5-month period, while around 20 percent of respondents in all age groups were suffering from sustained discouragement and feeling that there’s no hope. Therefore, based on the statistics, a significant proportion of the participants were suffering from emotional distress.
This is also a very noteworthy issue, although the study did not show that mental stress was only caused by discrimination. Anyone who has been subjected to restrictions from all aspects of life, discrimination, and/or even hostility from others for a long period of time can suffer a great deal of mental stress.
In summary, this study provides the unique data about the unvaccinated “control group” under the global gigantic experiment to mass vaccinate the population with newly developed vaccines with new technologies.
It also provides an important reference for public health practitioners to evaluate the policy decision making process in terms of the impacts of certain policies to different communities. For instance, in public health emergencies, there are often dilemmas in terms of public health ethics considerations. But we still need to ask: Are we sticking to “do no harm” ethical standards?
Views expressed in this article are the opinions of the author and do not necessarily reflect the views of The Epoch Times. Epoch Health welcomes professional discussion and friendly debate. To submit an opinion piece, please follow these guidelines and submit through our form here.

Xiaoxu Sean Lin
Follow
Dr. Xiaoxu Sean Lin is an assistant professor in Biomedical Science Department at Feitian College - Middletown NY. Dr. Lin is also a frequent analyst and commentator for Epoch Media Group, VOA, and RFA. Dr. Lin is a veteran who served as a U.S. Army microbiologist. Dr. Lin is also a member of Committee of Present Danger: China.
Health 1+1
Following
Health 1+1 is the most authoritative Chinese medical and health information platform overseas. Every Tuesday to Saturday from 9:00 a.m. to 10:00 a.m. EST on TV and online, the program covers the latest on the coronavirus, prevention, treatment, scientific research and policy, as well as cancer, chronic illness, emotional and spiritual health, immunity, health insurance, and other aspects to provide people with reliable and considerate care and help. Online: EpochTimes.com/Health TV: NTDTV.com/live
Posted by arclein at 12:00 AM