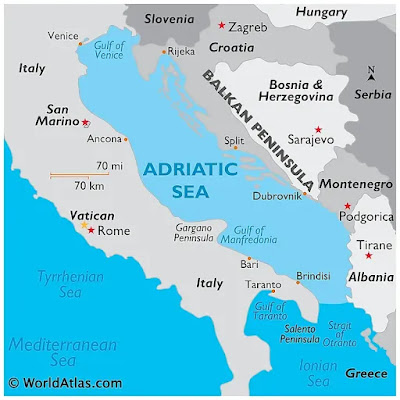 Understand that a floating urban complex can be a kilometer by kilometer barge type hull packing multiple fifteen story buildings along with multiple floors inside the hull and the first ground levels to provide several square kilometers of working floor space for manufacture and growing as well as support infrastucture.

a poplution density of 5000 per square kilometer is comparable to Vancouver or Shanghai.  That means the population potential of the Salish Sea in around 100 000,000 and for the Adriatic it is around 700,000,000 folks.  Obviously, the two most suitable ocean habitat environemnts can readily support a population of one billion people while been also self sustaining as well.

Both have full access to well established land based agriculture and manufacture.

The other major habitat region is the Indonesian  archepeligo were multiple ilands protected zones for a similar build..

I do want to add, that with vessels this huge, that open ocean builds are plausible, quite able to stand up to hurricane force winds, but why bother in the early going.

I have already posted repeatedly that the land alone needs a working population approaching 100,000,000,000.  This blog has been about sorting out the husbandry needs of the various biomes we face.  obviously we have hardly begun and our first global operation is full restoration of a global forest that eliminates all deserts.

Regardless, we today have the technology to feed everyone in any square kilometer urban complex sustainably.  even likely to produce a massive surplus and stimulate the ocean surrounding to become massively productive..