How effective are untrained conscripts or volunteers in modern wars? 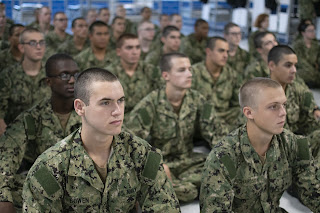 This makes so much sense that it should be standard.  Green troops need the shock and awe part handled before time is wasted on teaching them.  and yes, they can soon take on a lot of tasks at hand including holding a position.
War is so much about hurry up and wait.  Hard tasks need to go to the best.
Basic training will get you through progressive fitness training and competancy with your personal weapon and little else.  More training can take even a year.  Better to spend time on a hot front before you do all that.

How effective are untrained conscripts or volunteers in modern wars?

Lets say you give an AK-47 and a few mags to some civilians and teach them how to reload. How effective are these soldiers? Assume they will fight to their death.

Originally Answered: How effective are untrained conscripts or volunteers in modern wars?

Give them a gun, quickly teach them how to use it and then send them into battle: that's what we did with new soldiers in Bosnia and in Kosovo.

Sometimes we got new and untrained volunteers and as there was a lot of fighting going on, we simply didn't always have sufficient time to teach them all the intricacies of infantry combat. They would first go into battle and we would teach them the rest later.

Of course, these guys weren't the most efficient soldiers, but still, they could do some tasks. They would carry ammunition into the combat zone and wounded soldiers out of it. They were used as messengers or lookouts and we sent them away to get food, water, ammo or new radio batteries for us.

There are many combat related functions where such a guy might be helpful. Even if you have already well trained new soldiers arriving in your unit, you will give them some easy tasks the first time they go into combat.

We would keep a close eye on these untrained newcomers and check out how they reacted under fire. And when we saw that one of them was too scared to perform, we would send him back to where he came from without having wasted our time training him. In a way, sending them into battle first was a selection test.

What you don't do with untrained soldiers, motivated and fanatic or not, is to allow them to engage in combat. These folks carry their rifle more or less for self protection, but not to attack enemy soldiers. They don't know how to shoot and therefore would only waste their ammunition. They also don't know anything about gun safety rules and are therefore a security risk.

Usually, our new soldiers would quickly pick up the skills of the trade. After a couple of times in action and a week or two of basic training we could already entrust them with more important jobs, like second machine gunner or rifleman.

Everyone has to start from zero and these guys got their first swimming lesson by being thrown into the water. If they succeeded, they usually became reliable fighters.