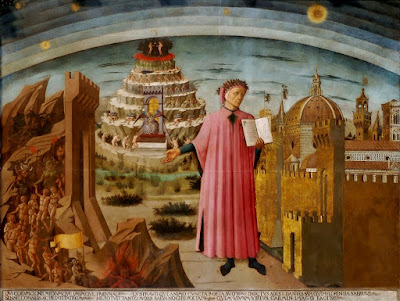 This sounds like a natural expansion of folk scholarship into all those unattainable original sources hidden away unintentionally simply because of lack of popular interest.
Almost all our cultural heritage is thus buried.  So this is a great place to start and ultimatelyu I want to see thousands of scholars digging in to all this.
There is nothing more important than the individual eyeball to confirm what is often reasonable conjecture.
USask researcher uses evolutionary biology to bring medieval literature to new life, online
SASKATOON – Italian poet Dante Alighieri’s epic poem Divine Comedy (Commedia) is now available for free and in richer detail than ever before, thanks to a new online platform created with University of Saskatchewan (USask) research.
As part of festivities commemorating the 700th anniversary of Dante’s death, an international team of researchers including USask English professor Dr. Peter Robinson (PhD) and Prue Shaw, emeritus reader in Italian studies at University College London, is launching a new online edition of the Italian master work with a twist—using evolutionary biology to trace how previous versions are related.
“This edition brings phylogenetic and database tools together with traditional scholarly research in a way never before available,” said Robinson.
The culmination of years of negotiations, the free online resource at www.dantecommedia.it makes widely accessible what was “previously available only to a very few readers with privileged access to the great libraries of Europe,” said Robinson.
This new edition breaks ground in many ways: it is the first edition of any major work by any author in any language to bring together, in a free online interface, full sets of images of seven key manuscripts and two modern editions—more than 2000 pages.
The mobile phone-friendly platform includes specialized tools for exploring the relationships between the texts, and a word-by-word comparison of all the texts, including all variants of every word.
“This edition will be for everyone: from the beginning student of Italian who just wants to look at beautiful images of precious manuscripts, to the scholar exploring advanced hypotheses about the text in the manuscripts, down to the level of each individual stroke of the pen,” Robinson said. “A 500-page editorial introduction, in English, leads the reader deep into the manuscripts and their text.”
Robinson’s role in this collaboration was to develop the digital tools used at every point of the project, many of which he created, and to make the interface and infrastructure for the final published edition.
As well as a 30-year partnership between Shaw and Robinson, key collaborators on the project have included Lino Leonardi (Scuola Normale Superiore di Pisa, and Fondazione E. Franceschini), David Robey (Oxford University Internet Institute), the Italian Digital Humanities DARIAH institute, and scientists from the Department of Molecular Biology, University of Cambridge.
The project has relied on funding from Canada’s Social Sciences and Humanities Research Council, and the Rockefeller Foundation in the United Kingdom.
“The next task: expand this edition to cover all 800 manuscripts of the Commedia,” Robinson said.
Posted by arclein at 12:00 AM