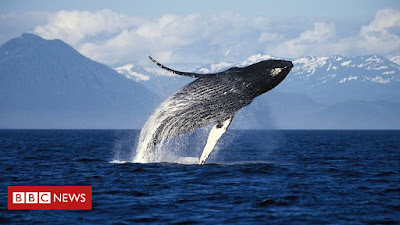 This is huge actually.  It is the equivalent of our discovery that rotational cattle grazing massively stimulates the grassland allowing double stocking.  Now we are about to discover that a truly healthy ocean needs way more whales at work and left mostly  in peace.
I already knew about the iron issues and now we need to ensure a whale population covering every square mile of ocean.
This means that a large whale population in the North Pacific is cert\ain to inspire a massive salmon fishery.  Recall a deliberate iron fertilization of the main Gyre of Haida Gwai'i produced a massive Sockeye run in the Salish Sea.  It is plausible that whales can do as much.
Stanford Researchers Recognize Lack of Whales Wrecks the Oceans
November 18, 2021 by Brian Wang
Stanford research on whale feeding highlights how the precipitous decline of large marine mammals has negatively impacted the health and productivity of ocean ecosystems.
Nextbigfuture had a video highlighting the problem of lack of whales and whale poop. Nextbigfuture also identified how iron fertilization of the ocean by humans could take the place of whales and whale poop. This would increase fish and algae.
Stanford researchers indicate that 12000 tons per year of iron fertilization is needed in the Southern Ocean alone.
From 1910 to 1970, humans killed an estimated 1.5 million baleen whales in the frigid water encircling Antarctica. They were hunted for their blubber, baleen – the filtering fringe they have in place of teeth – and meat. One might assume that from the perspective of krill – the tiny shrimp-like creatures the whales feast on – this would be a boon. But new research published Nov. 3 in Nature from a collaboration led by Stanford University’s Goldbogen Lab suggests the opposite: that the decline of baleen whales in the Southern Ocean has led to a decline of krill.
The researchers found the need to replace the 12000 tons per year of iron fertilization in the South Ocean.
The researchers looked at blue, fin, humpback and minke whales – all whales that feed by gulping a large amount of water and filtering it through their mouths’ fringed baleen plates until only their prey remains. They employed several high-tech tagging devices that attach to whales typically for about five to 20 hours, recording their movements, acceleration, sound and, if light allows, video. Drones, operated by the Duke Marine Robotics and Remote Sensing Laboratory, measured the length of individual, tagged whales, which helps the researchers estimate the size of their gulp. In collaboration with the Environmental Research Division at NOAA and the University of California, Santa Cruz, the researchers also ran an underwater device called an echo sounder – which Savoca likens to “a fancy fish finder” – which uses sound waves at several different frequencies to measure how much prey is around.
The Southern Ocean is among the most productive ecosystems on Earth, largely due to the abundance of microscopic algae, called phytoplankton. Phytoplankton are a vital food source for krill, small fish and crustaceans – which are, in turn, consumed by larger animals, including whales, birds and other fish. But whales also help sustain phytoplankton. Through eating krill and then defecating, whales release iron locked within krill back into the water, making that iron available to phytoplankton, which need it to survive.
Abstract
Baleen whales influence their ecosystems through immense prey consumption and nutrient recycling. It is difficult to accurately gauge the magnitude of their current or historic ecosystem role without measuring feeding rates and prey consumed. To date, prey consumption of the largest species has been estimated using metabolic models based on extrapolations that lack empirical validation. Here, we used tags deployed on seven baleen whale (Mysticeti) species (n = 321 tag deployments) in conjunction with acoustic measurements of prey density to calculate prey consumption at daily to annual scales from the Atlantic, Pacific, and Southern Oceans. Our results suggest that previous studies have underestimated baleen whale prey consumption by threefold or more in some ecosystems. In the Southern Ocean alone, we calculate that pre-whaling populations of mysticetes annually consumed 430 million tonnes of Antarctic krill (Euphausia Superba), twice the current estimated total biomass of E. superba, and more than twice the global catch of marine fisheries today. Larger whale populations may have supported higher productivity in large marine regions through enhanced nutrient recycling: our findings suggest mysticetes recycled 12000 tonnes iron per year in the Southern Ocean before whaling compared to 1200 tonnes iron per year recycled by whales today. The recovery of baleen whales and their nutrient recycling services could augment productivity and restore ecosystem function lost during 20th century whaling.
Posted by arclein at 12:00 AM