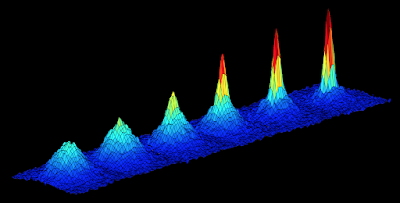 What this means is that the theorem can use temperatures other than absolute zero.  Rather helpful in designing future experiments aimed at confirming the theorem.
All helpful of course.  It gives us one more tool.
I keep thinking we are missing something here in not involving radiation around all this.  I am looking for an increase in structure.
Fundamental Quantum Theorem Applies to Temperatures Beyond Absolute Zero
November 11, 2021 by Brian Wang
https://www.nextbigfuture.com/2021/11/173732.html
The adiabatic theorem – a fundamental achievement of quantum mechanics – was first formulated by Max Born and Vladimir Fock at the dawn of quantum mechanics. The theorem ensures that the evolving quantum state always remains close the so-called instantaneous eigenstate if external parameters change slowly enough. In a sense, adiabatic evolution is something like taking a class of first-graders on a tour of a museum: you should lead your class carefully and without haste to make sure that by the end of the tour no one’s missing and all the exhibits are intact.
Above – A quantum spin is moved around a wire along a circular trajectory. Electrons in the wire are magnetically coupled to the spin due to fluctuations of the current. The many-body adiabaticity of the electron-spin system at finite temperature is robust with respect to increasing the length of the wire. In contract, the pure state adiabaticity breaks down at any finite driving rate.
Although the adiabatic theorem has been refined and improved since Born and Fock’s time, its major limitation was that it worked only for the so called pure states but not all quantum states. This means that it could be applied to systems at absolute zero only but never at finite temperatures. In our museum example, the tour could go off without a hitch only if the class consisted of well-behaved straight-A pupils, which is hardly possible in real life. Just as there can be no class without naughty kids, there can be no strictly zero temperature.
Researchers from Skoltech, Steklov Mathematical Institute of RAS and MIPT extended the adiabatic theorem to finite-temperature systems and obtained quantitative conditions that ensure adiabaticity of evolution with a given accuracy. For the sake of illustration, the team applied those conditions to several modeled systems and discovered that in some, the adiabatic dynamics was even more stable at a finite temperature than at absolute zero.
Physical Review A – Adiabatic theorem for closed quantum systems initialized at finite temperature
ABSTRACT
The evolution of a driven quantum system is said to be adiabatic whenever the state of the system stays close to an instantaneous eigenstate of its time-dependent Hamiltonian. The celebrated quantum adiabatic theorem ensures that such pure state adiabaticity can be maintained with arbitrary accuracy, provided one chooses a small enough driving rate. Here, we extend the notion of quantum adiabaticity to closed quantum systems initially prepared at finite temperature. In this case adiabaticity implies that the (mixed) state of the system stays close to a quasi-Gibbs state diagonal in the basis of the instantaneous eigenstates of the Hamiltonian. We prove a sufficient condition for the finite temperature adiabaticity. Remarkably, it turns out that the finite temperature adiabaticity can be more robust than the pure state adiabaticity with respect to increasing the system size. This can be the case for one-body systems with large Hilbert spaces, such as a particle in a large box, as well as for certain many-body systems. In particular, we present an example of a driven many-body system where, in the thermodynamic limit, the finite temperature adiabaticity is maintained, while the pure state adiabaticity breaks down. On the other hand, for generic many-body systems the scaling of the finite temperature adiabatic condition with the system size is exponential, analogously to pure state adiabatic conditions.
https://www.skoltech.ru/en/2021/10/fundamental-quantum-theorem-now-holds-for-finite-temperatures-and-not-just-absolute-zero/
Nikolai Il’in et al, Adiabatic theorem for closed quantum systems initialized at finite temperature, Physical Review A (2021).
DOI: 10.1103/PhysRevA.104.L030202
https://journals.aps.org/pra/abstract/10.1103/PhysRevA.104.L030202
SOURCES -Steklov Mathematical Institute of RAS and MIPT, Physical Review A
Posted by arclein at 12:00 AM