Braingate Translates in Realtime Thoughts to Text With 94% Accuracy 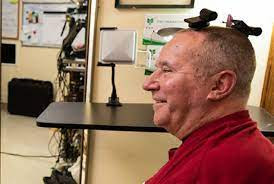 This is getting much closer.  This level of accuracy means that reconstruction programing can get really accurate.  It is all polishing and if hte person is able to accept and reject, then it is good.
Intime we want to be able to produce dictation which needs to also integrate a disciplined mind.  All this is attempting to be more effective than any of our mechanical methods.
All good though.
Braingate Translates in Realtime Thoughts to Text With 94% Accuracy
November 10, 2021 by Brian Wang
https://www.nextbigfuture.com/2021/11/braingate-translates-thoughts-to-text-with-94-accuracy.html
A paper in Nature reports that a Braingate Brain Computer Interface (BCI) enabled a man paralyzed from the neck down to have his thoughts translated to text with 94% accuracy.
An intracortical BCI tdecodes attempted handwriting movements from neural activity in the motor cortex and translates it to text in real-time, using a recurrent neural network decoding approach. The patient paralysed from spinal cord injury, achieved typing speeds of 90 characters per minute with 94.1% raw accuracy online, and greater than 99% accuracy offline with a general-purpose autocorrect. These typing speeds exceed those reported for any other BCI, and are comparable to typical smartphone typing speeds of individuals in the age group of our participant (115 characters per minute). Finally, theoretical considerations explain why temporally complex movements, such as handwriting, may be fundamentally easier to decode than point-to-point movements. This is a new approach for BCIs and demonstrates the feasibility of accurately decoding rapid, dexterous movements years after paralysis.
Neural activity recorded during the attempted handwriting of 1,000 sentences (43,501 characters) over 10.7 hours.
BrainGate is an interdisciplinary research team involving Brown University, Massachusetts General Hospital, Stanford University, Case Western Reserve University and Providence VA Medical Center. With a focus on practical applications and reliability, the team aims to develop assistive BCI technology to restore independence and communication in individuals with impaired movement abilities.
Previous wireless BCIs have not been able to match the fidelity of their wired counterparts, a limitation that is overcome by BrainGate’s high-bandwidth transmission protocol. The patients achieved comparable point-and-click accuracy and typing speeds with the BWD as when using a wired BCI.
They minimized power consumption, the BWD battery lasts up to 36 hr, enabling a participant’s brain activity to be recorded in their own home for 24 hr continuously.
They have developed a fully implantable version of the BWD and validated it in primates. They are currently preparing the device for regulatory approval prior to human clinical trials.
This work also shows it is more likely Elon Musk’s Neuralink company will also achieve it’s Brain computer interface goals. There was an October 2021 update on Neuralink.
A current leading brain computer interface researcher (Miguel Nicolelis) has not been impressed with the work at Neuralink and he thinks that 90% of what Neuralink promises is physically impossible.
There were also experts who said that Tesla electric cars could not compete with ICE cars over years ago. There were expert doubters of SpaceX. There are expert doubters about the Boring Company tunneling machine.
Posted by arclein at 12:00 AM