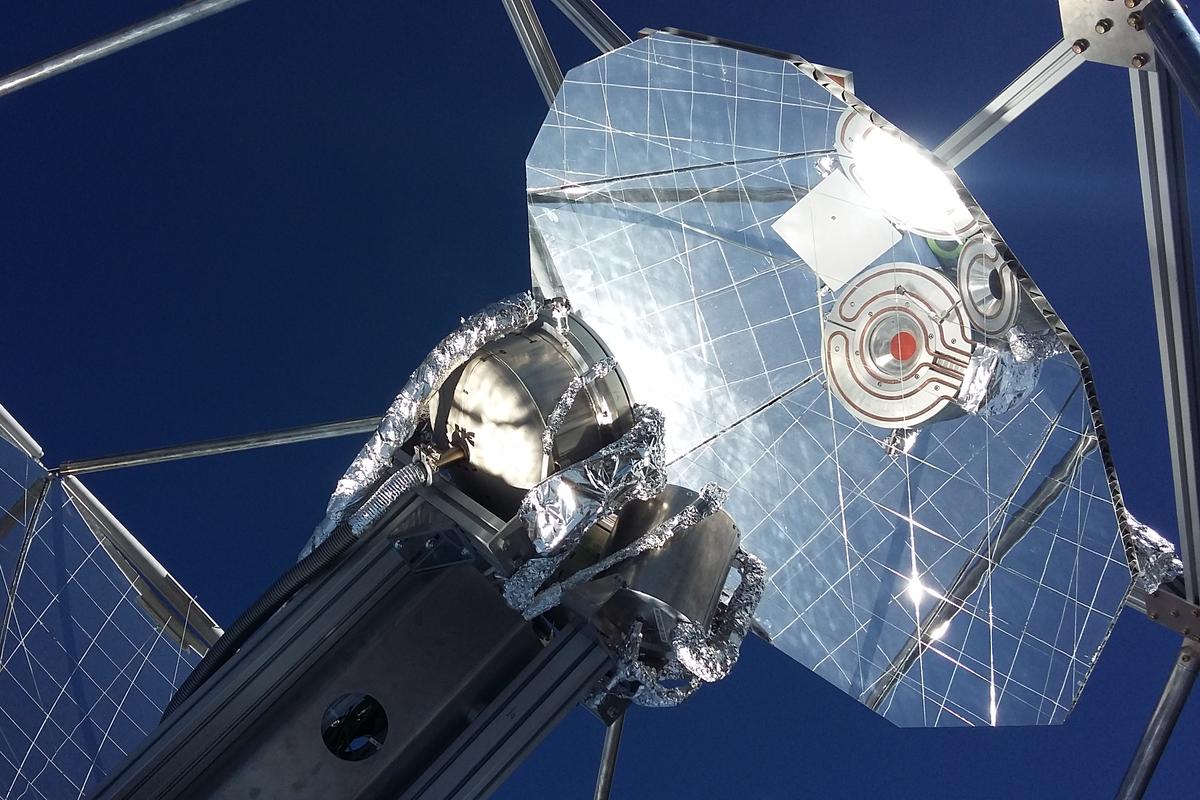 This showed us it can be done but at serious cost.  Can the design concept be minurized for real rooftop applications?  Just producing a flamable gas is good on its own if integrated with a gas service.
Getting the cost down is what makes this package work.  Otherwise nothing here is actually new at all.  Yet it is all progressing.
Having independent access to gas is a protection as well.  Yet the same solar energy could be better stuffed into a battery as well.  However gas can fuel a useful heat engine much better than a battery.
Rooftop system converts CO2, water and sunlight into kerosene
By Michael Irving
November 03, 2021
The solar fuel reactor harnessing heat from concentrated sunlight to convert carbon dioxide and water into syngas
ETH Zurich
VIEW 1 IMAGES
Engineers at ETH Zurich have demonstrated a pilot system that can produce fuels from sunlight and air. The device captures carbon dioxide and water from the atmosphere and uses solar energy to convert it into syngas, which is then converted into liquid fuel that’s essentially carbon neutral.
With a clearer understanding of the damage caused by human carbon dioxide emissions, there’s plenty of work being done to transition towards electric vehicles, hydrogen power, fuel cells and other sustainable forms of energy. However, these advances will require big changes to the existing infrastructure, which can slow down their implementation.
In the meantime, synthetic fuels could be a decent solution. These are made to mimic current liquid hydrocarbon fuels but are produced from renewable sources, such as biomass, waste products or carbon already in the atmosphere. And because they replace or complement fossil fuels, they can be “dropped into” existing engines and infrastructure.
In the new study, researchers at ETH Zurich developed and tested a new system that can produce these drop-in fuels using just sunlight and air. The resulting fuel is carbon neutral, releasing only as much carbon dioxide when burned as its production removed from the air originally.
The system is comprised of three units – a direct air capture unit, a solar redox unit, and a gas-to-liquid unit. The first section sucks in ambient air, and uses adsorption to pull carbon dioxide and water out of it. These are then piped into the second unit, where solar energy is harnessed to trigger chemical reactions.
A parabolic concentrator focuses sunlight by a factor of 3,000 onto the solar reactor, creating temperatures of 1,500 °C (2,732 °F). Inside the reactor is a ceramic structure made of cerium oxide, which absorbs oxygen from the incoming carbon dioxide and water, producing hydrogen and carbon monoxide – syngas.
The syngas itself could be collected for use, or it can be funneled to the third unit, where it’s converted into liquid hydrocarbon fuels like kerosene or methanol.
To test the concept, the researchers set up a small 5-kW pilot system on the roof of a building. Running for seven hours a day in intermittent sunlight, the device was able to produce 32 ml (1.1 oz) of methanol each day.
That’s not a whole lot, but the team says it shows that the concept works and could be scaled up to commercial production. A large-scale plant could look like a solar thermal power plant, with a field of concentrators focusing sunlight onto a central tower. The team calculates that a plant using 10 of these fields, each collecting 100 MW of solar radiative power, could produce 95,000 L (25,000 gal) of kerosene per day. That’s enough to get an Airbus A350 from London to New York and back again.
To cover the entire demand of kerosene in aviation, the team calculates that around 45,000 km2 (17,375 sq miles) of solar plants would be needed. Unfortunately, high upfront costs to set up these plants would make these fuels more expensive than the fossil fuels they’re replacing, so subsidies and support would be needed to get them off the ground, which may limit their viability.
The research was published in the journal Nature. Take a tour of the system in the video below.
Fuels from sunlight and air
Posted by arclein at 12:00 AM