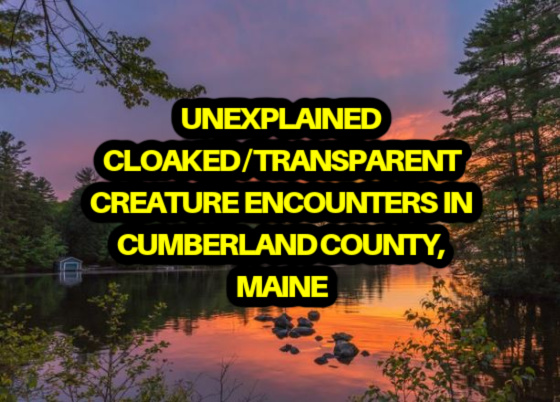 Well yes.  We have had snippets of this but now we have a serious report that is real as well.  We know two creatures can make themselves invisible, likely by stepping back or forward slightly in time.  So how many of the others can do this?.
Here we have a flying creature and this explains why we are rarely seeing the big ones.  They are obviously way more common than imagined if they can be invisible as well.
We should be seeing low flying pterodactls and thunder birds as well.  Now we know why.  They all operate to be out of sight.
unexplained  AS Cloaked / Transparent Creature Encounters in Cumberland County, Maine
Posted: 15 Dec 2020 10:46 AM PST
A witness in Maine reports 2 strange occurrences. First, An unknown flying, though transparent, creature. Second, the scary approach of a heavy, but cloaked, animal or being.
I recently received the following accounts from a reader:
"I have had 2 experiences with something that I could either see through or was cloaked somehow.
1. (winter 1993 or 1994 - Bridgton, Maine)
The thing I saw was not a machine. I have no idea what it was but it was close to me and flying.
On a very cold winter night in '92 or '93 I stepped out of a house I was visiting to the car at about 10pm and looked up (Bridgton, Maine). It was exceptionally clear and starry (brilliant stars). Right away I saw movement above me.
Something was moving, rapidly twisting and turning like a bird, like birds in a fight over some scrap. This thing was about 60 ft above me, looping back and forth within an area of less than 10 ft. It was about 5-10 ft across and it was transparent. It looked like it was made of glass, like a glass sculpture the way the stars behind it were distorted. I bought a glass sculpture of a bird to explain the way what is behind it is distorted due to the differing thicknesses and bulges on the surface... when moving, spinning, swirling wherever is behind it is visible but distorted.
I can't say for certain that it had wings but it moved like a bird. I got the sense that it was angry, distressed or just plain pissed-off. I would not have seen it except for the exceptionally starry night and the light from the stars behind this thing streaking/shifting/distorted. If it were cloudy or daytime I would not have seen it.
I watched it for about 3 minutes before it went out of sight behind some trees. I don't think I can properly convey how fast this thing was moving in tight twists and turns. It was like a living thing with a body, thicker in places, thinner in others...not uniform like a machine. If a person had body language like this I would say they were out-of-their-mind-angry.
I've never heard of anything like this or anyone who has seen anything like it in the sky.
2. Pleasant Mountain (Bridgton/Fryeburg, Maine) near the top of the fire lookout station trail, 1994 or1995
I hiked the western trail to the fire lookout tower (as I had many times before)...almost always with a dog but not this time. On the way down, not far from the top was a stretch where there were thick evergreens to my right (right side had steep rise) and to my left widely spaced trees (not evergreens)...ground sloping down to the left, light undergrowth, 200 ft visibility.
I heard something heavy charging me fast, very fast from the left. When first noticed I would guess it was just beyond my 200 ft visibility. It got closer and closer, I would say not more than 50 ft away when it stopped. I could not see anything. I should have been able to see a 20 lb dog. I know how a moose runs, it has long legs and a distinctive gait. I also know what a buffalo sounds like, shorter legs and a unique gait. It sounded like a big heavy buffalo...
I have no idea what it was. I should have been able to see it because it was very big/heavy and close. It sounded like it had hooves. What I heard was not simple twigs breaking but like the thunder of a stampeding animal... ground shaking. It scared me. Only recently when I think of it did I consider that whatever it was stopped when it got close because it saw how big I was (about 310 at the time). Recently I have heard of other people being false charged by something they could not see and other witnesses reporting something cloaked like in the predator movie (heard these reports in the Missing 411 accounts).
If you ever hear of something seen in the sky like what I saw I would really like to know about it." GA
Posted by arclein at 12:00 AM