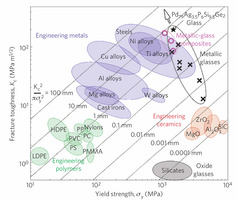 Slowly but surely we have continued to improve on past performance.  Yet I suspect that it will take a fundamental breakthrough to go much further.  We have long since passed the point of diminishing returns for most of this.  After all, we still use steel for a great reason! It is cheap.

I see this stuff been used in time to form thin shinned craft needing to be very light.  Even an airship could become huge using material such as this, and since the sole limitation there to real gigantism is material strength, a super strong light material is necessarily useful. Recall performance improves as a cube to strength performance increases.

Of course, my interest is in Magnetic Field Exclusion Vessels which also need to be large and light to be initially space worthy during the early development.

Ashby map of damage tolerance (toughness versus strength) of materials.

Glass stronger and tougher than steel? A new type of damage-tolerant metallic glass, demonstrating a strength and toughness beyond that of any known material, has been developed and tested by a collaboration of researchers with the U.S. Department of Energy (DOE)’s Lawrence Berkeley National Laboratory (Berkeley Lab)and the California Institute of Technology. What’s more, even better versions of this new glass may be on the way.

The new metallic glass is a microalloy featuring palladium, a metal with a high “bulk-to-shear” stiffness ratio that counteracts the intrinsic brittleness of glassy materials.

Commercialized metallic glass known as Liquidmetal and Vitreloy hit the market several years ago in the forms of golf clubs and baseball bats, it was too brittle to withstand much duress.

Liquid metal company website
Liquid metal at wikipedia
The liquid metals have always been strong but the new material is far less brittle. 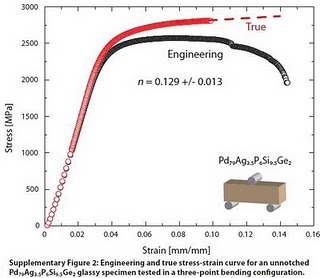 Micrograph of deformed notch in palladium-based metallic glass shows extensive plastic shielding of an initially sharp crack. Inset is a magnified view of a shear offset (arrow) developed during plastic sliding before the crack opened. (Image courtesy of Ritchie and Demetriou) 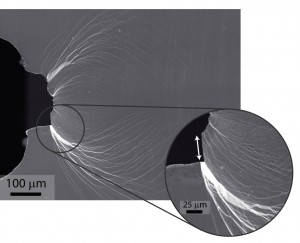 “Because of the high bulk-to-shear modulus ratio of palladium-containing material, the energy needed to form shear bands is much lower than the energy required to turn these shear bands into cracks,” Ritchie says. “The result is that glass undergoes extensive plasticity in response to stress, allowing it to bend rather than crack.”
In earlier work, the Berkeley-Cal Tech collaboration fabricated a metallic glass, dubbed “DH3,” in which the propagation of cracks was blocked by the introduction of a second, crystalline phase of the metal. This crystalline phase, which took the form of dendritic patterns permeating the amorphous structure of the glass, erected microstructural barriers to prevent an opened crack from spreading. In this new work, the collaboration has produced a pure glass material whose unique chemical composition acts to promote extensive plasticity through the formation of multiple shear bands before the bands turn into cracks.


“The rule of thumb is that to make a metallic glass we need to have at least five elements so that when we quench the material, it doesn’t know what crystal structure to form and defaults to amorphous,” Ritchie says.

Owing to a lack of microstructure, glassy materials are inherently strong but brittle, and often demonstrate extreme sensitivity to flaws. Accordingly, their macroscopic failure is often not initiated by plastic yielding, and almost always terminated by brittle fracture. Unlike conventional brittle glasses, metallic glasses are generally capable of limited plastic yielding by shear-band sliding in the presence of a flaw, and thus exhibit toughness–strength relationships that lie between those of brittle ceramics and marginally tough metals. Here, a bulk glassy palladium alloy is introduced, demonstrating an unusual capacity for shielding an opening crack accommodated by an extensive shear-band sliding process, which promotes a fracture toughness comparable to those of the toughest materials known. This result demonstrates that the combination of toughness and strength (that is, damage tolerance) accessible to amorphous materials extends beyond the benchmark ranges established by the toughest and strongest materials known, thereby pushing the envelope of damage tolerance accessible to a structural metal.