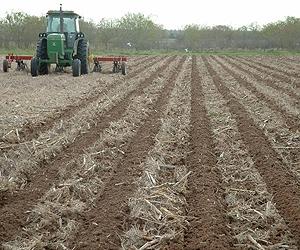 This is a neat protocol that can be easily adapted to a range of crops.  It serves to both reduce the fertilizer consumption while supporting increased yields.   It comes awfully close to hand tilling methods which naturally controls fertilizer usage.

I am surprised that we do not as yet use cross linked polymer capsules that hold individual seeds and nutrients to sow our crops.  Just because it can be done does not mean it is cheap enough.  Such a system delivers the seed and awaits moisture to activate a perfect growing medium.  I first saw it demoed for tree planting.

Once the equipment is in use, other applications will soon follow.

Strip tillage is the practice of tilling a field in strips up to a foot wide and eight to nine inches deep, rather than tilling the entire field, so that crop residues can be left on the surface of most of the field.

U.S. agricultural practices create 58 percent of nitrous oxide in the world, which is the third most prevalent greenhouse gas in the atmosphere. Scientists believe nitrous oxide contributes to global warming about 300 times more than carbon dioxide.

New practices and products have been introduced to address this issue, but farmers do not have the time or profit margins to experiment with ideas that may ultimately hurt the "bottom line."

Now, researchers at the have found methods to help farmers reduce those emissions while also increasing corn grain production.

At the University of Missouri Greenley Research Center in northeast Missouri, Kelly Nelson, a research agronomist and associate professor in the MU Division of Plant Sciences, monitored fields of poorly drained claypan soil that were planted with corn after soybean.

Strip tillage is the practice of tilling a field in strips up to a foot wide and eight to nine inches deep, rather than tilling the entire field, so that crop residues can be left on the surface of most of the field.

By planting corn into those strips, and adding fertilizer during the process, farmers can use less energy, reduce soil erosion and conserve soil moisture in a large area of the field. Additionally, the nitrogen stays deep in the soil, where it less susceptible to environmental loss.

"This tells us that more efficient fertilizer use is needed to maintain productivity and profitability," said Nelson. "We saw grain yields increase, and this is important when it comes to nitrous oxide emissions and the amount of food produced."

Peter Motavalli, associate professor in the MU Department of Soil, Environmental and Atmospheric Sciences, directed the research focused on measurements of soil nitrous oxide emissions and says the results are another piece of information that can help farmers select management options that may increase agricultural production and economic returns while also reducing environmental impacts with use of nitrogen fertilizer.

The research was conducted during above average rainfall growing seasons from 2008 to 2010 in poorly-drained soils so the results of between 2.4 to 3.8 percent cumulative loss of the applied fertilizer N as nitrous oxide N are probably relatively high for conditions in .

"The main goal for our team has been to identify agricultural practices that maintain or increase production while reducing the environmental impact," Motavalli said.

"There hasn't been much data on greenhouse gas emissions for Missouri, and we hope to provide information on how much nitrogen is being lost as nitrous oxide with different agricultural practices so growers can make informed choices depending on their farm operation and environmental conditions."

Nelson, Motavalli, and Pat Nash, an MU graduate student, presented the results of their three-year study, "Use of Strip Tillage to Increase Corn Production and Reduce Soil Nitrous Oxide Emissions," at the national meetings of the American Society of Agronomy in November and at the Missouri Crop Management Conference in December.
Posted by arclein at 12:01 AM

It takes a month or nothing to explain how lunacy has taken hold of our country's agriculture.
The fiat dollar has so corrupted the farming industry that it is tatters. Farmers who are in it now do so simply because of the profits to be had at the expense of the soil. We no longer practice rotation, livestock has disappeared from farms as has the barn yard. All have been replaced with towering grain bins to feed an alleged starving world.
But we will reap the whirlwind. We no longer care for that most precious resource, our soil. Sugar cane, once the bane of rolling lands, is planted practically anywhere there is climate and room to plant it. The result, land that should be kept free of the plow is tilled and washes away with every rainstorm. Beware your fate is upon you. A subsidy check will not return the topsoil washing down our streams and rivers.